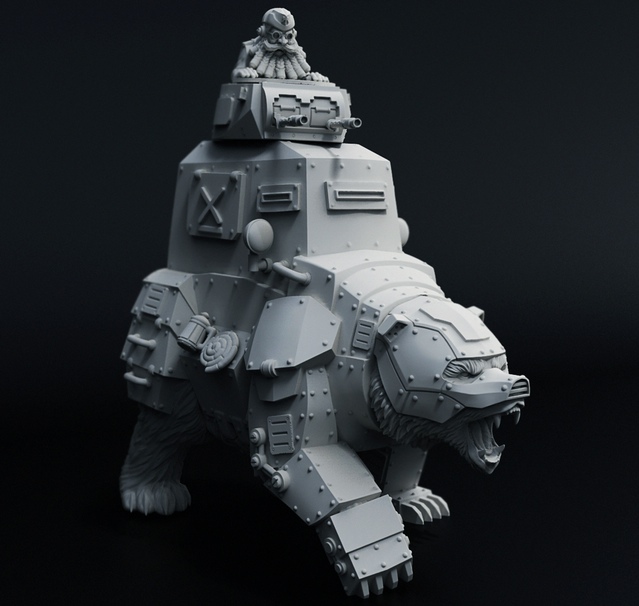 Move over Russian Bear Cav, and Duardin Salamander Cav – there is a new player in town! Check out the new “Panzer Bear” from Hysterical Games:

It’s not going to be a huge update today. We’re still working on 3D printing, for the most part and dealing with that number of files is an awful lot of work. We’re expecting the next batch to arrive tomorrow. Rob will be getting these into moulds as quickly as possible.

Speaking of which, casting has taken a bit of a slump, due to the Christmas and New Year’s holidays; which is caused a delay in getting the equipment totally ready. we have done some casts of the Orc Support, but we’re not really convinced that the quality is up there with the other products we’ve shown you, so we want to hold out until next week.

Next week should be a big one. 🙂

On a more positive note, there is some great news, the Panzerbär is complete! This has two turret options, as well as the option to build it with an open turret hatch and a tank commander, or a closed hatch. There are also optional stowage parts! Victor has done a fantastic job of bringing this beastie to life, we’re really happy with it!

More news, we’ve got the Techniks for the Dwarf Zinn Mann completed too. Dwarf Techniks are strange folk… Not really trusted by anyone. They tinker with Techno-Magick and they wear their beards in a strange, Un-Dwarven fashion…

Okay, that’s it for now folks, more on this in a few days time when things have, hopefully, returned to normal!

What do you think? I’m digging the look! I can’t wait to see what else Hysterical Games has in store.