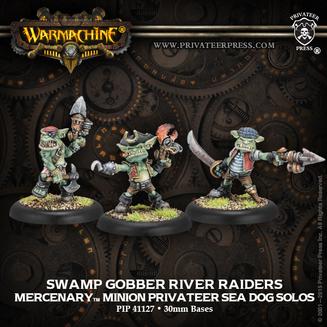 Yay more gobbos!  The only thing better then getting a new gobber solo is getting 3 gobo solos!  The gobber river raiders are out and they are pirates on top of it!

Remember that they can benefit from sea dog buffers like Lord Rockbottom.

These guys have some cool abilities.  A reverse drag when they shoot models with their pistols.  Instead of dragging models to them the gobbo gets placed base with the model.  This can be annoying for your opponent since these models have a decent defensive value.  All of a sudden a gobbo is behind 3 pikemen.  They have to clear him or risk freestrikes on their models.

Don’t depend on these guys killing heavies or warcasters because they don’t hit hard.  They are support models that are great in getting annoying spots.

Getting the Most from Your River Raiders

The river raiders are not for everybody.  However they are sea dogs so things like lord rockbottom buffs, Hawk’s desire, Bog’s no knockdown can all help these guys along. If you are already bringing pirates these guys might as well come along.

Circle can get these guys shooting defense really high since they have camouflage.  EMorvhanna’s fog of war or druid clouds will make these guys incredibly hard to shoot down with normal means.

Since  Denny makes everyone better, Cryx can always use more models with guns.  Things like Mortality or crippling grasp make even the swamp gobber pistols a credible threat.

What do you think BoLS?  Have you seen the river raiders on a table near you?  Please share in the comments below.