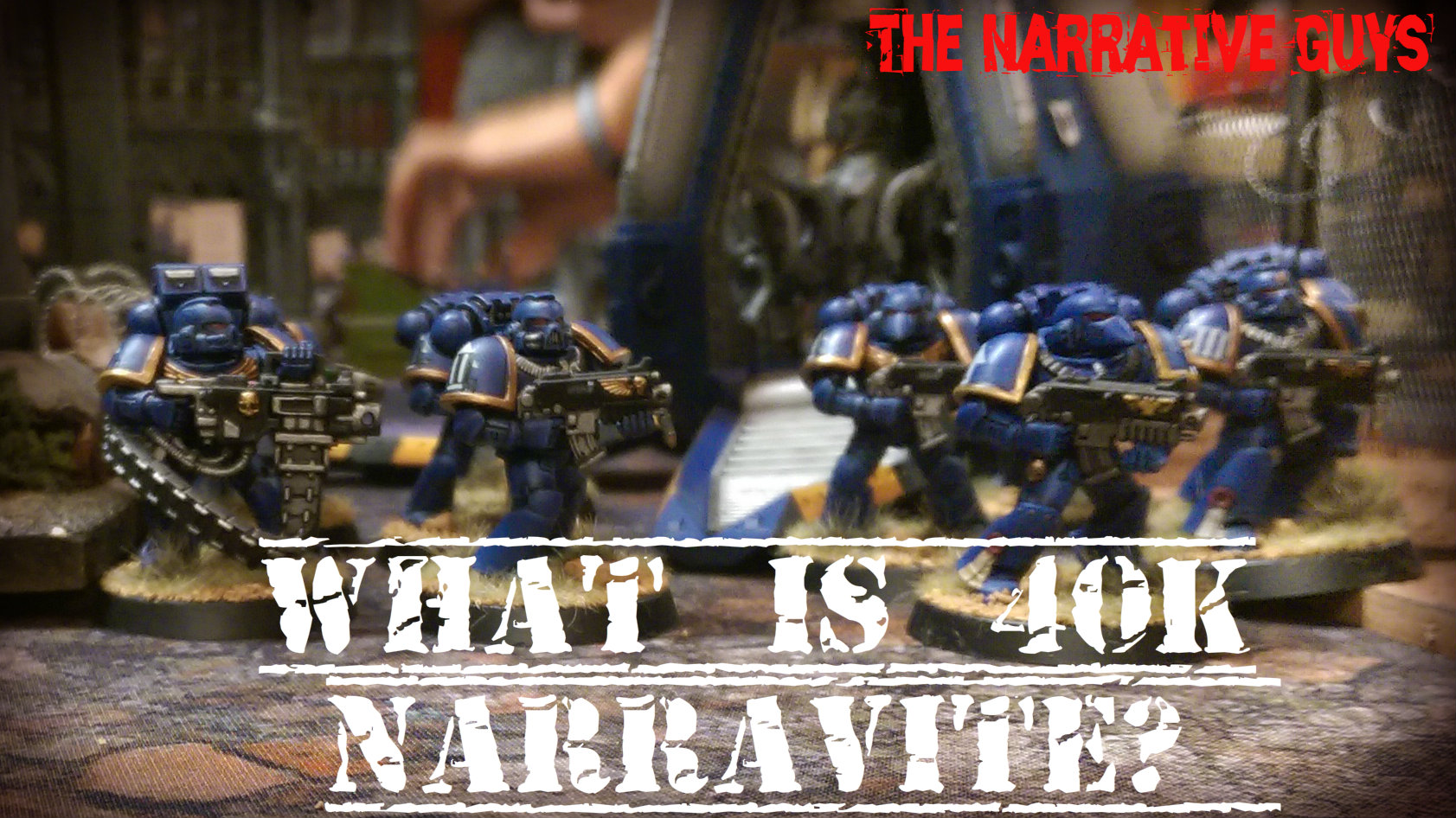 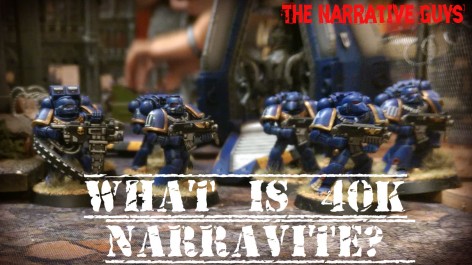 The Narrative Guys break down what exactly a narrative 40k event looks like – and why you should check it out!

Narrative simply means an account of connected events. A narrative 40K game is one that tells a story on the board. This is different than fluff that tells the history of the models on the table, and different from a campaign that connects a series of games with fluff in order to tell a story.

For The Narrative Guys (TNG), we focus on the smaller stories and try to bring these moments to life. The events we want to shine the light on are those incidents when a squad or a sergeant does something amazing. The fate of the planet, system, crusade, etc. is held in the land of fluff and it has some amazing writers working on it.

For us, the board is our stage, and your mini is in the spotlight. Our desire to highlight heroic deeds at the single-mini-level is one of the reasons that we don’t run apocalypse events. That scale of god-like war-machines makes it hard to capture the story at the single-mini-level. We love to have apocalypse scale models on the table, but we want to keep the focus on the squad and use the big guys as a part of that story, not the focus of it.

To make narrative really come to life, we need some help from players. One of the most important aspects of storytelling the players can bring to the table is an identity for their forces. This can be everything from naming your Warlord to making sure every squad has unit markings. Writing fluff for your army is good, but keep in mind that the action will happen on the table, and the best (or last) days of your warlord’s life are going to happen in this game we are playing.

Never underestimate the power of a team. Narrative events are chances to join other players who also play your faction and fight side-by-side as brothers-in-arms. Our standard game is a 3-on-3 or 4-on-4 with missions themed around the terrain. Players of like factions join together to play as Task Forces. In each battle, missions will have theme that meshes with the fluff of those players’ forces. This is why pre-event communication is so important to us. We want to players to find faction groups and get to know each other, and we need the group fluff so that we can create a story and missions with your group in mind.

“Allies” in the 40k sense are better executed in narrative play by actually adding players, not splitting up your army. Instead of each player having 2 factions on their army list, one player takes faction A, the other faction B. This builds a good degree of narrative unity, since each player may have different tasks, as we’ll see in in the mission descriptions below.

Missions are a key point to narrative play. They define how players interact with the story, and by good mission design, narrative play makes it feel like your forces have a purpose on the map, not just an arbitrary goal from the typical game.

We break missions into several levels: Table missions, Personal missions, and Drop-in missions. This layering of missions allows players the opportunity to create heroic actions on the table top.

Table missions are missions shared by all the players on a Task Force. These are victory-point driven missions that affect the narrative itself. They help explain what’s happening in the overall battle. Objectives for Table missions might be things like “hold the main road through the jungle,” or “assault and destroy the defensive positions around the airbase.” In some cases, both sides will have the same mission, but just as often they will be slightly asymmetric, with each side trying to achieve distinct goals.

Second are Personal missions. These are player-specific and have multiple stages, escalating in difficulty from Basic, to Challenging, to Heroic. Each stage will add some benefit and some challenge for the player’s warlord to accomplish. An example might be: Basic: “get your warlord to the vox communications tower.” The benefit might be 1 VP, and the opponent would not be aware of the mission. The Challenging level might be “signal command with the location of enemy forces.” The warlord now gets a free artillery attack on a unit in LOS, but the enemy is now informed of the effect, and can act to stop the warlord. If the warlord can hold for 2 turns, he might earn 3 VP. Finally, the Heroic level might be something like giving the enemy a choice of units to deep strike onto the warlord’s location to stop him. The reward for surviving this level might be 1 Hero point. We’ll talk more about Hero points and Personal missions in another article.

The last mission type is Drop-in. These are mini events that will happen on the table when key actions take place. They may apply to the table, or to a specific player. An example might be “extract a wounded commander.” These missions help create unexpected situations and keep the game fresh.

Terrain is very important for a narrative game. It’s something that fundamentally sets this type of play apart from casual and tournament games. Not only does the theme of the table matter to the story itself, the quality of the terrain and addition of themed objects really makes a big difference in game play experience.

Our first rule is that tables should look like places where people live and/or fight. We talk a great deal about art direction on our tables. We often refer to the terrain as “the third army on the board.” This is because the look and function of the terrain has a huge impact on the way games feel, and how the battles play out. Playing on a narrative table should always be a step above the feeling achieved by playing on tournament tables.

When competitive players layout a table they want to make sure the terrain doesn’t give one player an advantage. They want symmetry. For narrative games, we want the terrain to tell a story and to guide missions that would seem logical in that type of place. We want the table to be a challenge to the players. One team may very well have superior cover, or open space, or important objective locations. Since missions suit the terrain, and asymmetry is completely possible. 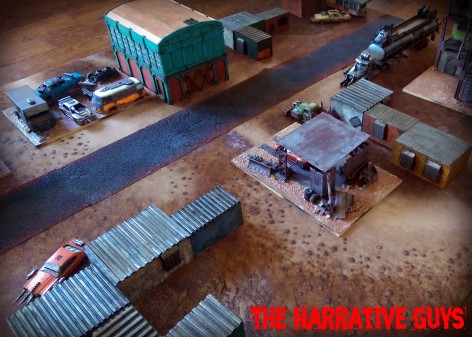 A great example of terrain affecting game play was the 11-inch-high wall straight down the length of a 16-foot table at WarGames Con 2014. The wall was cut by only 3 breaches that allowed about 8 inches of space to move ground forces through each breach. Players had to adjust their play to deal with it both as individuals and as a team. The players had to choose forces to clear the breach, secure those forces from outside attack, follow through on their successes, and react to their failures. It was amazing to watch.

Variety of theme is another point that The Narrative Guys wanted to address. Not all tables are burnt-out cities. We have jungles and farmlands with different kinds of foliage. We have still-inhabited cities and slums and alien worlds. Each table is more than just a few ruins and some scatter craters. It is has a “sense of place” that our players get to experience.

Since we play multiplayer games, our standard table size is double the size of a typical 40K board: 8’ wide by 6’ deep. Everything in that space needs to fit the unifying theme to give players that “sense of place” and why the battle on this particular piece of ground matters to their army, and to the story. The table also has to provide multiple options for objectives to ensure good replay value. We don’t use markers or tokens to indicate objectives; the objectives are simply part of the terrain around you. 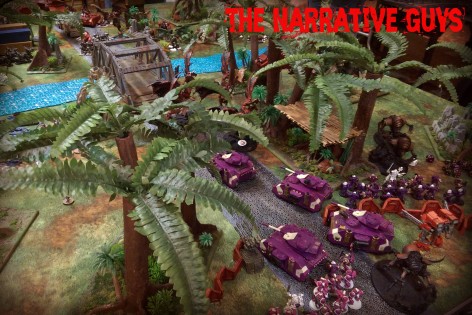 Something that inspired us to start The Narrative Guys was the iconic photography from Games Workshop with their models. We think you’d be hard pressed to find a player who hasn’t been influenced by the amazing pictures of epic battles from GW. It’s simply a foundation of the hobby itself. So, when we plan and execute an event, we spend a good amount of time talking about “the picture” we are creating. We want to provide an amazing, detailed backdrop for players to battle on with their beautifully painted models, just like the pictures in the magazines and books we all love. We also try and capture specific moments in time of these battles. We call them Epic Moments. An Epic Moment is a photo that sees the story thought the eyes of a character or unit, instead of the grand sweeping battle of the whole board. You’ll even see us write up short stories based on these moments, where the models look beautiful and the story just writes itself in the image.

As a player, you are part of the team creating these moments, and many small things matter a great deal. Putting your best painted models on the table is step one. It shows respect for your fellow players, and is the only way to make awesome photos in the first place. Second, pay attention to how your models are placed. It’s easy to break a good photo by having a half squad pointed at a fearsome enemy,  and the other half facing the opposite way. Finally, keeping game-aids and papers off the table is critical. Let your models be the spotlight, not your dice.

The Narrative Guys try and make our games much more than a casual pick-up-game; we want them to be events to remember. To make that happen takes a great deal of planning and effort from the staff and dedication from the players. A great example is the battle map that we display on an overhead projection during the event. This is a live tactical view of what is actually happening on the tables.  We also assign a TNG staffer to each table to keep track of objective scoring, condition of forces and their location so that information can be fed into the display which we then update at the end of each player turn. In addition to the basics of tracking the game, the TNG staffer also provides “the voice of command” for each side. This means that mission orders, intelligence updates and objectives are passed to players at each table. The goal of all of these things is to connect players together with the story.

Would you travel to more events if they where narrative based?