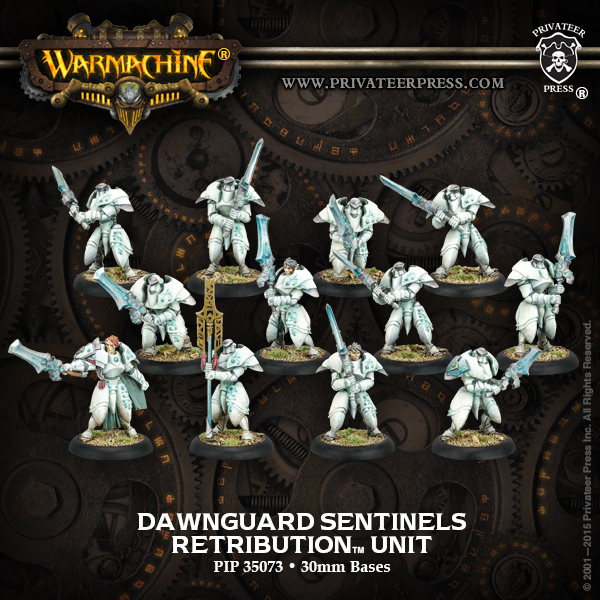 The dawnguard sentinels are new and improved ready for action! Let’s take a look at putting these new minis to good use.

Who are these guys?

These guys have been around for a while but, with their new and improved models let’s take a look at what these retribution warriors can do.  The dawnguard sentinels are retribution’s goto weapon master reach unit.  They are slowed down a bit by all the armor they wear but have a nice 10” charging threat.  Just like their bane knight cousins they too also have vengeance.  They get an armor bonus while they are base to base with a buddy in the unit.  Unfortunately, their standard bearer did not learn how to wave his stick so he is just a body blocker most of the time.  They have a little above average MAT so can reliably hit most heavies.  They can also jack marshal with “PRONTO” which is one of my personal favorite janky things to do.  With Pow12 on the charge they threaten even some of the heaviest armors.  Keep you Officer safe so he can provide vengeance for the unit.

Thyron can make the sentinels deadly accurate with the feat.  Spellpiercer lets you ignore annoying things like arcane shield or iron flesh.  Going back to PRONTO, a banshee with pronto buffed up by Thyron feat is scary.  Warlocks beware the 15”-17” sidestepping ,crit grievous warjack coming your way.

Issyria and Vyros1 both have Inviable resolve making the sentinels armor a respectable 19 while they are base to base.  Issyria can also help with defense shenanigans with blinding light and her feat.

Rahn can set up heavies or casters for assassinations with a combination of force hammers, telekinesis, and battle mages pushing stuff around the battlefield.

What can men do against such reckless elf sword dudes?

Sentinels armor can have a few pow10s bounce off here and there but they will die to most charging units.  And at only Def12 these guys are not dodging to many punches.  Vengeance is Granted so you can remove it if you snipe the officer.  Don’t kill them if you don’t want vengeance weapon master elves getting closer to you.  If you have to kill them , kill as many as you can. Retribution does not have to much pathfinder readily available.  Things like inhospitable ground and Rift AoE templates or extra forests popping up can really hamper their threats.  Remember, things like electro leap and fire don’t trigger vengeance.

What do you think BoLS?  Have you been delivering