The cat is out of the bag and It looks like someone got Deathwatch: Overkill’s product info early – Come see the latest! 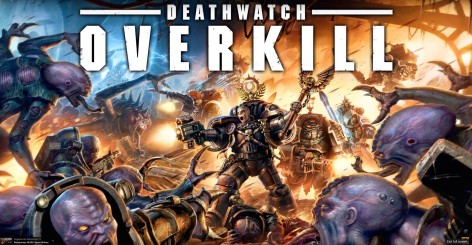 Now that Games Workshop has everyone pumped and primed for the new board game it appears that someone on the internet got their hands on an official GW product description/write-up of the contents. This looks like it could be a part of a retailer newsletter or something along those lines. 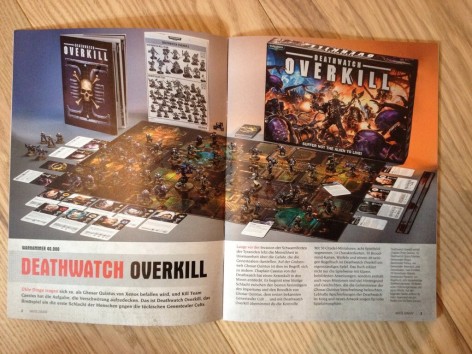 Games Workshop wrote:
Games Workshop is proud to introduce you to Deathwatch: Overkill – Suffer not the alien to live! A brand new game in a box. Deathwatch: Overkill tells the story of the discovery of the Warhammer 40.000 Genestealer Cult (Tyranids) by the elite Deathwatch Space Marine kill squad on the mining world of Ghosar Quintus.
Deathwatch: Overkill is a standalone game with lots of new Space Marine and Genestealers Cult (Tyranid) miniatures that can also be used in a regular Warhammer 40.000 game. The miniatures can be used for this game, or they can be used straight in a regular Tyranids army or one of the many Space Marine chapters (without having to convert them). The rules for the Space Marines will be in White Dwarf 109 and for the Tyranids in White Dwarf 110. In addition the datasheets will be available from our website.
DEATHWATCH: OVERKILL – WHAT’S IN THE BOX?
A brand new game in a box, telling the story of the discovery of the Warhammer 40.000 Genestealers Cult (Tyranids). The box contains:
50x brand new highly detailed plastic miniatures, with lots of little details depicting character background information.
The miniatures have a dynamic single pose and will require glue and assembly (they are not push fit). The miniatures can be divided into two camps: 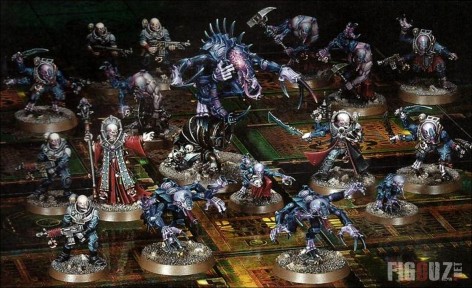 The Genestealer Cult
A brand new Warhammer 40.000 fraction! The below list of miniatures make for addition to an original Tyranid army, an allied detachment to another army, or a great start for a brand new Tyranids army! This box contains the following Genestealers Cult miniatures
12 Acolyte Hybrids (1st and 2nd generation Tyranids)
16 Neophyte Cultists (3rd generation Tyranids)
2x Purestrain Genestealers
2x Familiars
4x Aberrants
1x Patriarch
1x Magus
1x Primus
A 48-page rulebook with all the rules (just 3 pages, so it will be easy and quick game), character explanation, the background story, and 9x different missions. (Each scenario acts out one of the stages of the storyline. Each scenario will last between 30mins to 2 hours and will give a lot of playability)
8x double sided board tiles with different landscapes.
A deck of 12x reference character cards and 30x Broodmind ambush and mission cards, to offer even more variation to the game so that each game will be different.
A booklet with assembly instructions
Gaming accessories such as markers, templates and 6 dice.

That is a lot of stuff crammed into that box! Plus we have a couple of key features that jumped out:

It’s awesome news to hear that the rules will be available in the upcoming White Dwarf 109 and 110 – but more importantly the datasheets will be online! It also sounds like the game rules will be scaled down 40k – only 3 pages of rules and a ton of background for a 48-page rulebook. What’s curious (and I’m sure has everyone else concerned) is the pricing. If those Marines alone would retail for £215 then what exactly will this box cost? And what is that retail price based on? A current Space Marine Captain runs £18 and these models would probably be in a similar clam-pack style release if they were individuals. That would only come out to £198 for 11 – which is close to $300. I’m really hoping GW didn’t price themselves out with this box set! Guess we’ll have to wait and see…

Join the discussion and view all the pics here:

Why would they mostly come at night? We’re underground in a mining facility! It’s not like we can see the Sun or anything.

Author: Adam Harrison
Writer, Editor, Texas Native, and Austinite for 15+ years, Adam covers all things Tabletop Gaming. Which includes Warhammer 40,000, Age of Sigmar, D&D, Board Games and everything else that involves dice, boards, cards and a table. A hobbyist, player, and collector of miniatures and games, Adam's current obsession are his Death Armies for Age of Sigmar, his Blood Angels and Tyranids for 40k, and his ever growing Arkham Horror: The Card Game Collection.
Advertisement
Board Games Games Workshop Space Marines Tabletop News Tyranids Warhammer 40k
Advertisement