Come take a look at the upcoming Tau Product releases.  EXTRA BONUS – you can read these in English!

We have three Tau products arriving this weekend.  Let’s take these in turn:

We get an 80 page re-release of the Farsight Enclaves Supplemental codex in softcover.  This one is essentially a standalone compilation of the Farsight rules and formations from the Mont’ka campaign book.  So if you skipped that and love O’Shovah, pick up this budget edition.

A quick and easy combo box for all your Tau commander needs.  You get the new Commander and the plastic Etherial previously released in the fall. There is no word on accompanying rules or a formation for this, but that does seem to be the way of these boxes from GW these days.

Everyone loves decals.  This sheet gives you over 1000 decals made especially for the Farsight Enclsves.  I hope you like painting red – and don’t give a crap what the Ethereals think! 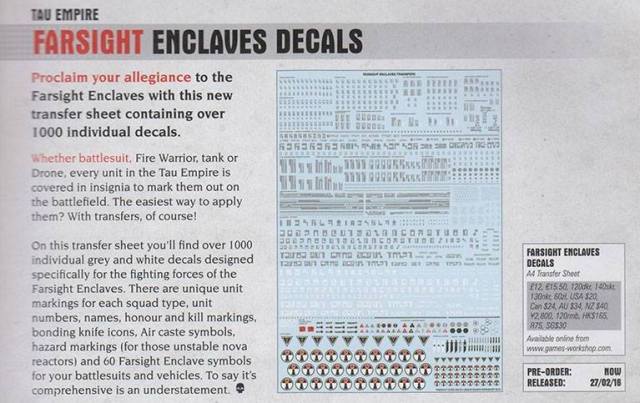 ~Greenskins coming up next…