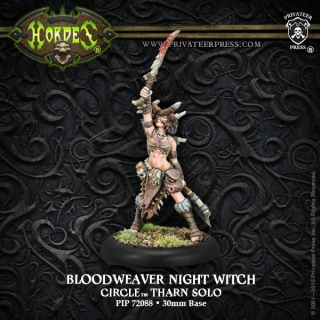 The night is long and full of witches! Check out the newest witch for circle! The blood will certainly be flowing!

This is a brand new solo for the Circle Orboros faction.

-Killing Spree ; and gives to friendly bloodweavers in her Cmd range.

The bloodweaver witch can be a great new addition for those looking to kill more infantry. She can boost her own attack and damage rolls at the price of d3 damage. But, she heals back for models she has killed. Is your local opponent spamming mechanithralls and giving you issues.  Well if spaced poorly the bloodwitch can kill a ton of them. She and any bloodweavers in her command gain Killing Spree.  Killing spree opens up the potential for maximum murder for the bloodweavers by letting you move 1″ and gaining an additional attack.  The bloodweavers are pretty fast already so they should be able to get into decent spots for killing multiple models if you are bringing this new solo with them.  Remember, the bloodwitch also has grievous wounds so even tough infantry are scared of this witch! 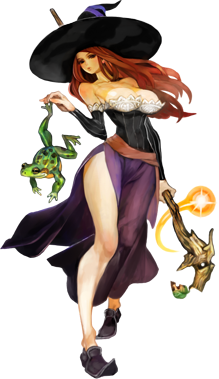 Who to play her with?

Kruegar 1 aka not the epic Krueger.  He loves this new solo.  Why?  She does not have reach so it can severely limit how far she can get into the enemy line without reach.  But, Krueger has Lightning Tendrils and can give out reach as he pleases.  Meaning this solo can literally murder the world.  For every attack she hits she can :

That is pretty rough for a big blob of infantry , even ones properly spaced. I personally watched a bloodwitch kill a whole unit of bog trog shamblers the other day and it was glorious!

Morhvanna the magic goat also likes our bloodwitch pal.  While she doesn’t give the reach ability she does give rerolls.  The bloodwitch is only MAT 7 so when she is rolling for 6s she will end up missing every once and awhile. Morhvanna can help her along the way.  Also Morhvanna can help out the Bloodweavers too, so maximum killing sprees can be utilized.

Grayle is another warlock to consider conscripting the new bloodwitch solo.  Stormrager makes her really scary by raising her Mat and Str.  Grayle’s feat could put her in a dirty spot for charging into a whole mass of troops that don’t want to be anywhere near her! 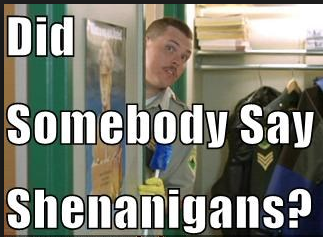 How do you fight against her?

Non circle players might have started to sweat a little realizing how many models this one solo could potentially kill in an activation.  She does have some drawbacks.  She is only Mat7 and low armor and boxes. The bloodwitch will have trouble hitting high defense models and ,unless she has lightning tendrils, spacing can reduce her impact.  Just like bloodweavers she doesn’t like blast damage or any electricity bouncing around her way.  If you can snipe out stealth solos before she really doesn’t have much protection.  Gun mages love low armor models and she is some of the lowest.  A winterguard Kovnik Joe boosted spray or a Basalisk Drake’s spray will finish her off in most instances.

What do you think BOLS?  Will you be fielding the new Circle Bloodwitch Solo in your games?  Please share in your comments below.