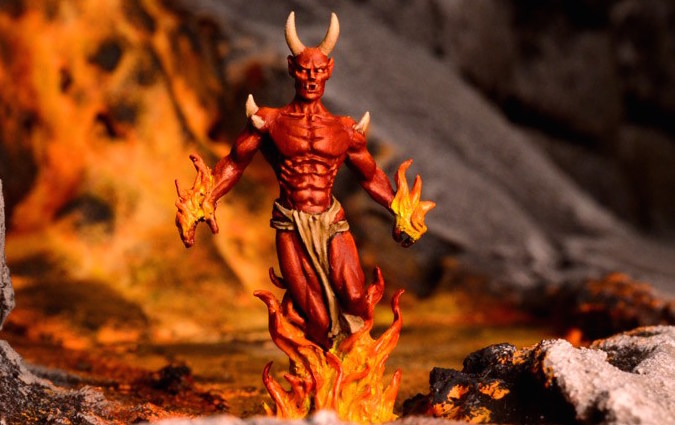 The Forces of the Abyss aren’t just tough – they also have a few tricks up their flaming sleeves as well. Check out the Efreet & Gargoyles preview!

So far Mantic has shown off their foot troops, their Elite Units and the Champions of the Forces of the Abyss – Now lets take a look at their specialty troops.

The Efreet are the sorcerous rulers of the Fourth circle of the Abyss, the blessed children of Ariagful, the dark goddess of flame. It is here that they train a small number of Lower Abyssals to become Flamebearers. It is a realm of fire and magma, where the Efreets oversee the forging of great weapons and artefacts for the Wicked Ones’ armies. When the Forces of the Abyss go to war, the Efreet join them, floating atop unnatural conflagrations. They hurl flame and death at their foes at will, melting through armour and turning bones to ash. The metal Efreet is a stunning model. Held aloft by sculpted flames and brimming with power and rage, this finely detailed metal kit comes with additional components so that you can build your Efreet in a variety of poses. There is a choice of heads, including one with a demonic goatee, which fits in well with the elites of the Abyss. Although they are heroes, the Efreet aren’t leaders on the battlefield. They are powerful ranged units, perfect for adding their firepower to an assault or hunting down weak, isolated units. Their high speed stat and Pathfinder rule makes them very mobile and wielding a whopping Fireball (20) makes them a huge threat on their own. Remember that they do take up a hero slot, though so don’t take them at the expense of a valuable leader. Gargoyles occupy the same rank as Lower Abyssals in the infernal hierarchy. Simple and bestial, they flock to armies of evil where ever they appears. They hover like carrion birds, darting into attack isolated or wounded prey. They are possessed of a voracious appetite that can never truly be sated. They can regenerate damage, like the other Abyssals, but their fragile nature does prevents them from being a meaningful threat. Still, woe betide those or ignore them entirely – they may be swooping in at the worst moment to devour. Gargoyles were technically the first Abyssals ever to see release. Cast in plastic, these swarms of flying demons are perched atop pillars of stone. Each one is dynamically posed to look as if they are about to swoop in for the kill. When assembled as a unit, they appear to be made only of beating wings and tearing claws – a terrifying prospect for your opponent to face. Each model has been sculpted with cracks forming all over their flesh – to suit the mythological stone beings they are named for. There is a choice of heads, which allow you to either build your Gargoyles with a more feminine (harpies) or demonic character.

These vile creatures are found in the Abyssal Dwarf and Twilight Kin armies as they are attracted to any and all evil doers. They’ve made a name for themselves in the game as good flanking troops and warmachine hunters. Their speed and Regeneration mean that they can range ahead of the rest of your army, while their low points cost makes them more than expendable. With a very low defence value, they won’t stand up to much damage, but if they can bring down a unit or two, then they’ll be more than worth their deaths. Besides, you’re evil, what do you care if a few worthless minions perish?

The Efreets are up for pre-order now and will be shipping ta the end of February! The Gargoyles are already available on our webstore! Order yours now!

The post Forces of the Abyss: Efreet and Gargoyles appeared first on Mantic Blog.

There you have it folks! Abyssal forces are knocking at the door – who’s side are you on in the conflict for Mantica?