If you’re wondering what this Waaaaagh! Ghazghkull Supplement is all about – don’t worry we got you covered! Go inside the cover of the new codex NOW!

We first saw this come out in 2014, with Farsight’s supplement preceding it in 2013 and you know it’s really interesting that GW is in an arms race with itself to get these updated.

I do have the old hardcover Ghazghull book, it’s on loan from a friend [who by the way, is looking to sell it and some other collector sets, so if you’re interested in it let me know] so we can do a side by side comparison of what’s new.

The first difference is obviously the hardcover versus softcover, however, I will say the softcover is very well done. That being said the entire fluff section seems to be exactly the same. So the Special Edition, Normal Version, and now the new soft cover have the same exact fluff.

Next up, the Wargear. Yup, it’s the same too. I went through them both and I can see it’s exactly the same. Warlord Traits, Orkhimedes custom gubbins, everything, the same.

However, after that the difference starts to show. The new Decuion-like detachment is called the Great Waaagh Band Detachment. In the old version it’s the Great Waugh! Detachment. 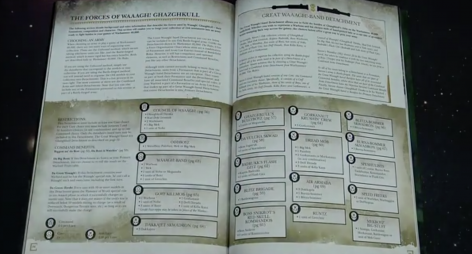 The first Command Benefits are the same. There are more benefits after those and that’s where things start to change. The Big Boss lets you re-roll on the warlord traits table, which isn’t something you would ordinarily get to do outside of CAD. You also get to call a Waaagh! Every single turn, which for Orks, is huge since getting across the table is paramount.

The Green Horde gives you Hammer of Wrath for every unit of more than 10 models in the detachment the successfully completes a charge.

In the core section, The Goff Kill Mob and The Waaagh! Band are, as far as I can tell from my research, new formations. The auxiliary section has some re-prints from the old book, some from the Red Waagh! and some which where online from the What’s New Today website in 2014 as well.  Some of these Auxiliary formations are kinda cool, like the Mekboyz’ Big Stuff, which let’s you take up to ten stompas in this formation all by itself!

They’re are two formations, which were spotted somewhere else and I do remember reading them, but I don’t know where they come from. They’re the Council of the Waagh! and Ghazghkull’s Bullyboys. However, I’m pretty sure they’re form Sanctus Reach or the Red Waagh.

The next few formations all match up with the old supplement: 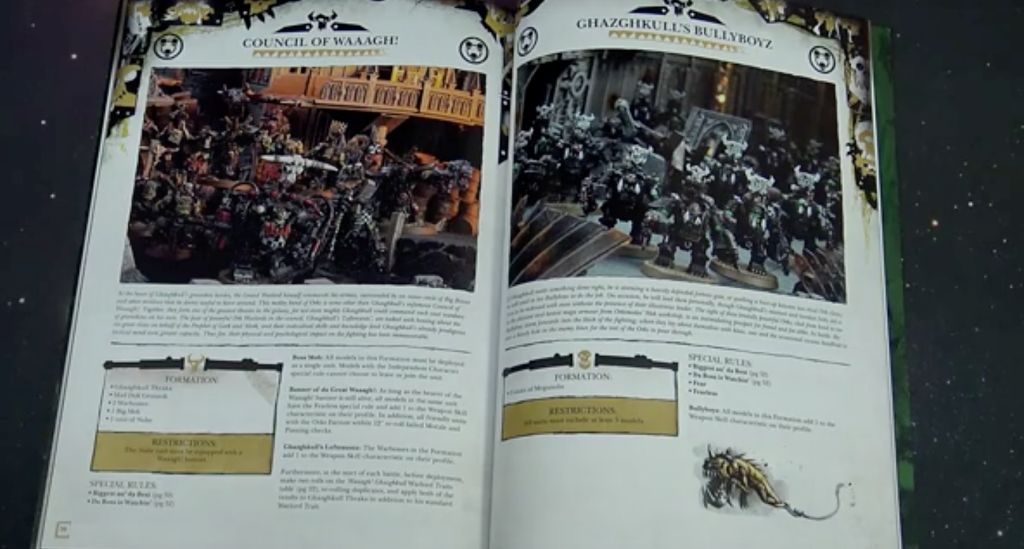 Until you get to where the Green Tide Section is in the old supplement. They put the two Core formations that you need for the Great Waaagh Band Detachment but you can take individually if you wanted and confer their own special rules. 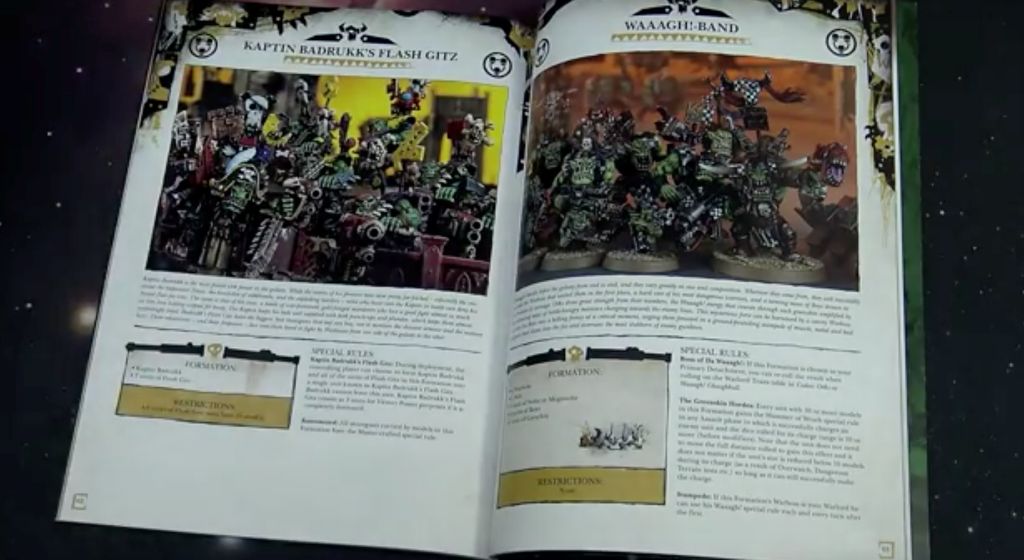 The Gorkanaut Krushin’ Krew was in the Red Waagh! Book, and The Goff Kill Mob was a free download from Games Workshop, and then all the Dakka Jet formations are renamed but also from back on the Games Workshop site ( I believe).

So, down to the nitty gritty, GeeDub says you get three new formations, I can’t exactly place which ones are new, I’m not sure if I’m getting some of them confused with the Apocalypse versions but it’s one of the following: Council of Waaagh! Ghazkull’s or Bullyboyz and these two: Kaptin Badrukk’s Flash Gitz, and/or Waaagh! Band. [Update: Michael Cheatham in the comments said the Council and the Bullyboyz are both in the original so maybe it’s The Great Waaagh! Band Detachment which they’re considering to be a new formation.]

That being said, is this book really worth the $33? If you’re an Ork player it’s pretty cool because you get the Great Waaagh Band Detachment which let’s you field your Orks in a new way; so I think that’s definitely worth having.

You get the fluff Again so that’s cool. Games Workshop has a knack of selling us things we’ve already bought over and over. Obviously, they wouldn’t do it if we didn’t buy it, but we have to be very cognizant of these new products; how much is new, how much is reprint, and how much of it is damn confusing!

If you knew a little bit more about these formations and where they fit please drop it in the comments. I’m not an subject matter expert on Orks but I wish I was because they seem so neat and they can make something out of nothing.

You can play with virtually any model you want because you can just Ork it up. #orkinghobbyback 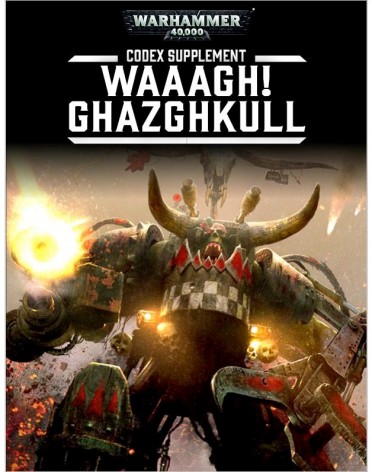 Waaagh Ghazghkull – a Codex: Orks Supplement is your complete guide to Ghazghkull’s crusade. Inside you will find the full background tale of the rise of the greatest Ork Warlord to ever stomp across the galaxy. As well as rules for fielding an army worthy of Ghazghkull in your games of Warhammer 40,000, you will find a lavish showcase demonstrating the impressive range of models, as well as colours and icons of the many units and formations fighting in the warlord’s force.

DESCRIPTION
It has long been said that should the disparate Orks ever unify beneath one leader they would crush all of the so-called civilised peoples of the galaxy. That doomsday draws nearer, for the great greenskin Warlord Ghazghkull Thraka has arisen, and Orks from all clans muster to his bellowing warcry. He is not just a mighty warrior, but a master strategist and the living Prophet of Gork and Mork – the brutal greenskin gods. Already star systems burn upon his orders, and more will soon follow. Ghazghkull has called the Great Waaagh!, drawing towards him the most warlike of his savage race. Goff warbands, Speed Freeks, Dread Mobz – all have crossed the stars in their seething multitudes to join the greatest Ork crusade in a millennium. This time, nothing will stop the green tide.

In this book you will find:

So, it’s a new year, does this make anyone want to start a new Ork army?