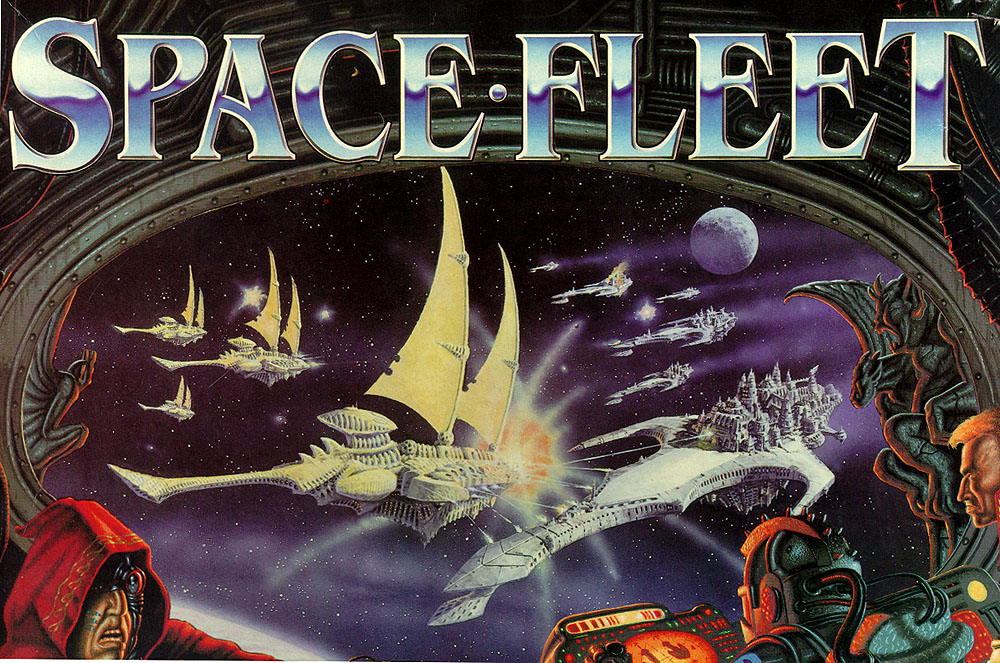 A trip down memory lane by the BoLS Lounge’s Denzark

“Oh, so you fought in the Gothic Sector? That’s cute. I’ve seen fleet actions that make that little dust up in Gothic seem like a playground fight between two Ratlings. Now now, don’t be hasty shipmate, I’m sure you’re handy with a boarding axe. Howabout you buy us both a wet – that 13 year old Cabellan Rum will do – and I’ll spin you some dits that would turn an Ogryn to daily bathing….”

Back in the day, GW pushed out a series of 4 games designed as introductions to their respective worlds: Ultramarines (Space Hulk), Kerrunch (Bloodbowl)…um, something else I forget – but one I don’t forget, was Space Fleet. Actually, the Wikipedia entry describes it well:

So I’ll just cut on to reminiscing. The initial game had 2 Imperial Gothic Battleships and 2 Eldar Wraithships. It was played across 6 boards with 4×4 squares, looking like this: 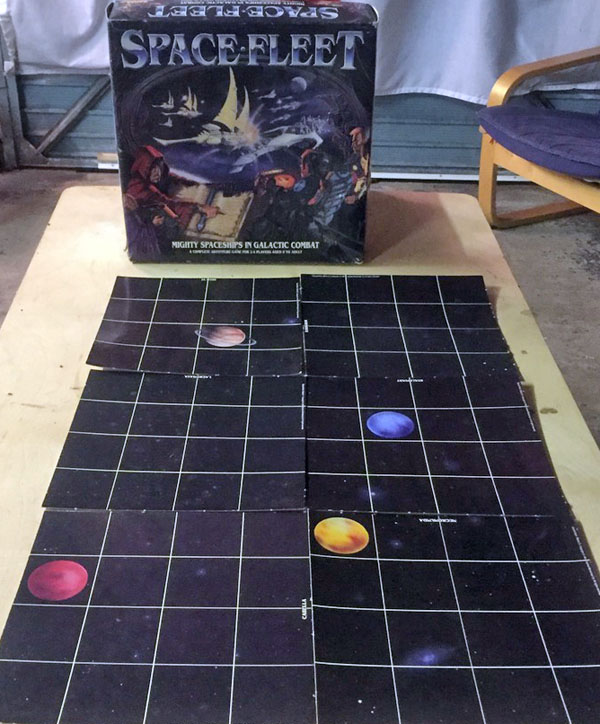 But had 2 aspects which were unique at the time. The first, actually mirrored in Ultramarines, was that you held the number of dice you attacked with, above the upturned box, and dropped them in to a grid that looked like this: 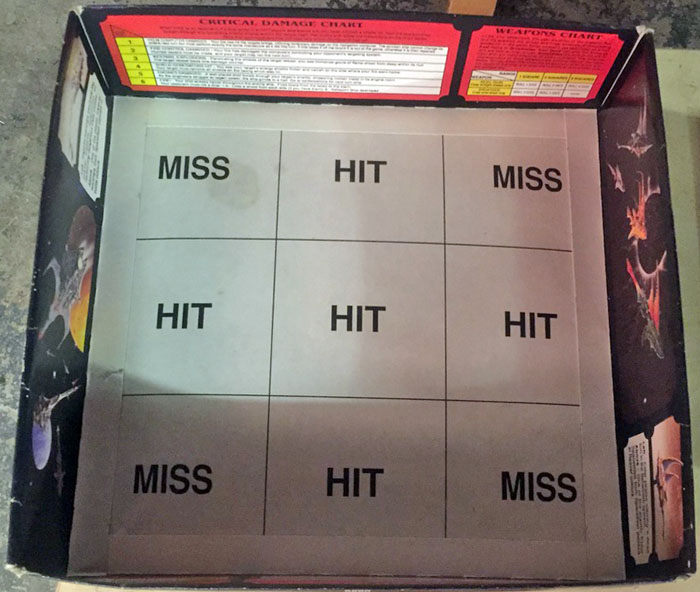 The second, which for me made this one of the best GW games – was that you both selected moves for your ships on a helm computer you hid. You then revealed simultaneously and moved simultaneously. Whoever fired first, even if you destroyed the target, it would get to fire back – to represent simultaneous combat. No IGYG. So actually you were jockeying for position, trying to get into unshielded arcs, and present broadsides to bear. 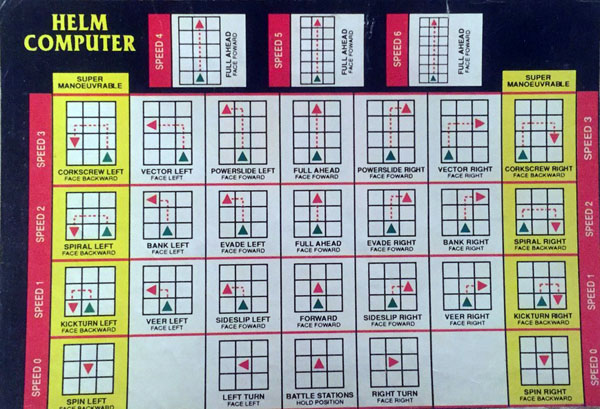 Now, I had a mucker, as we discussed the re-release of Blood Bowl, that he rated it GW’s best ever game. High praise. For me, I think it is probably Space Fleet. But not in its original format. Because GW extended the rules in WD, making it far more advanced. Suddenly, you had points systems. Squadrons. Damage repairs. Boarding actions. Flag ships with extra abilities. Support vessels. Basically, the best bits of Wrath of Khan, the Undiscovered Country, the Dominion Wars – oh and probably Endor. The relevant White Dwarfs (Dwarves?) are the following: 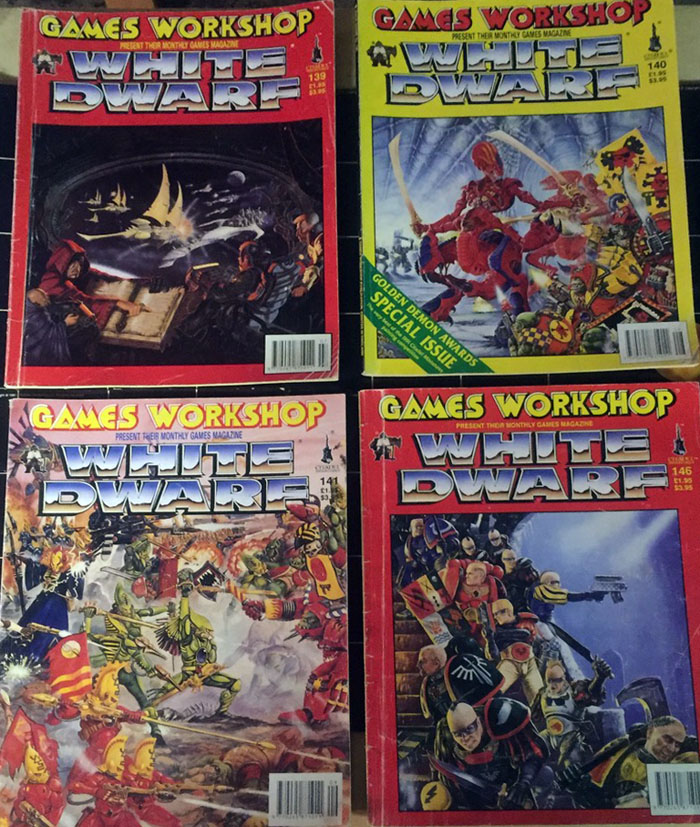 This next picture shows you the expanded profile cards for the 2 ships supplied with the game, but changed them to have individual profiles. The Imperials have unshielded rear engines, and rely on broadsides – so you find yourself getting as close as possible then turning side on. Made them slightly predictable. The Eldar cleverly relied on the Solar Wind – you rolled for direction at the start, and then with it to your rear, you could go faster. Eldar used plasma torpedoes, that automatically did critical hits – normally a 6 on a hit square was critical. 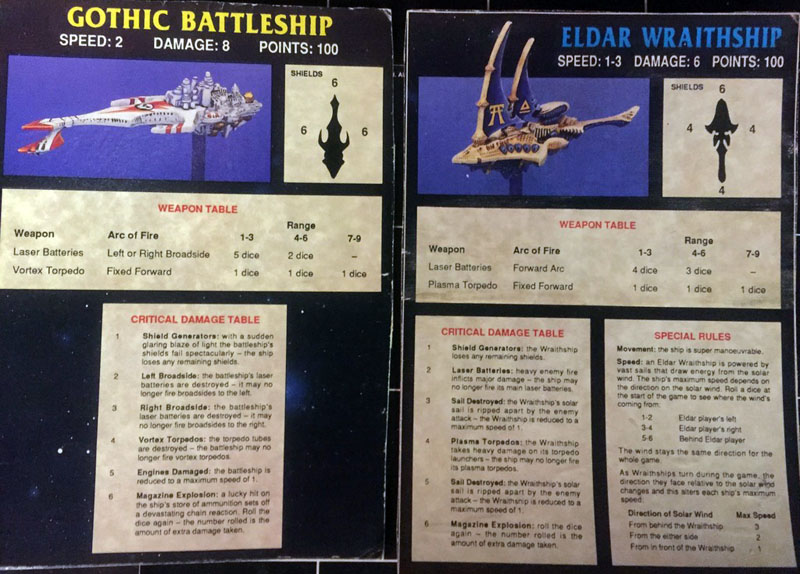 This next shot shows a typical ship with the WD provided counters. Yellow being shields, the skull being damage. Counting down until a satisfying ‘shields down’ was shown, and then you clearly tried to turn the ship away to present an undamaged side. Once a ship went to 0 damage, it was crippled, and then could potentially be boarded, maybe repaired and limp away. A 12 on 2d6 meant the lucky repair crew managed to get engines and weapons online again – and the luckiest person could do this with an enemy ship. 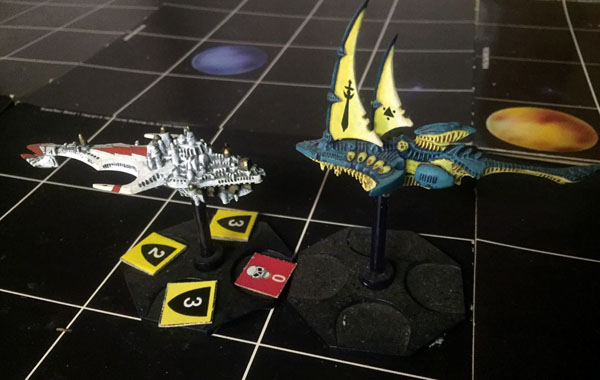 This next shot shows an Eldar fleet. As mentioned, the larger ships are Wraithsips. The smaller are Shadow Hunters – which had an interesting mechanic of Eldar Holofields, which meant the faster they went, the harder they were to hit – you’ve got the T-shirt I’m sure. In practise, on a limited space table, One could guess where they would need to turn, position a battleship, and then broadside them before they went speeding off in the other direction. The Eldar only had 2 ships – although concept art showed another variant with 3 sails. 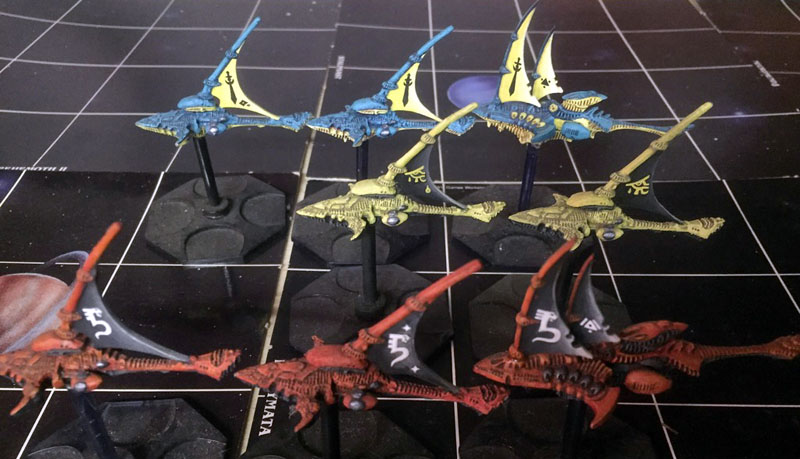 Next up, the biggest baddest ship in the whole game – the Emperor Capital Ship, and most usually Flagship of the fleet. To show what a beast he was, I wanted him in black. Yes, there were rules for using the prow ram to literally smash people apart – if you could guess where they would end up while moving.

Next, a trio of Imp ships – the Ironclad, the Gothic and Annihilator Battleships. The Ironclads were fun, because as their name suggests, rather than shields, they were so old they just had slabs of metal. The Annihilator had a giant turret you could turn 90 degrees a turn, but had to plan when to. 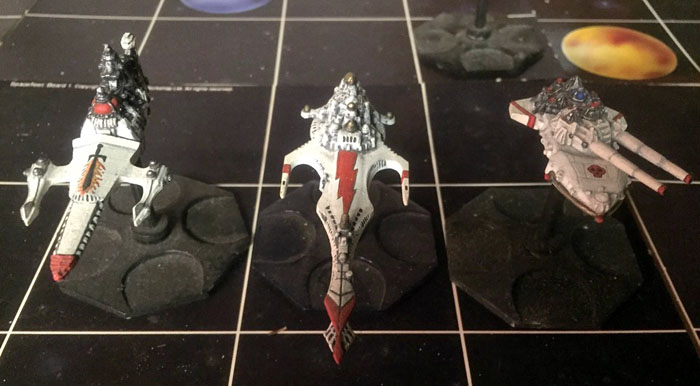 Next, a trio of support ships. Left to right – a Galaxy troop ship, a Castellan Shield Ship and a Stalwart Escort frigate. The troop ship was naff all use – except if you managed to board something where the troops on board would come into play. The Shield ship was like a mobile Void Shield Generator – but you had to power it down before it absorbed too many hits. The Stalwart created a blind spot. None of these were huge in game terms, but made for some excellent narrative.

An Imperial Fleet arrayed for battle…

To start with, you were restricted to just Imp and Eldar. However, Chaos used the same ships as the Imps so your fleet was just a paintshop away…

A pair of Firestorm Cruisers with an Ironclad. 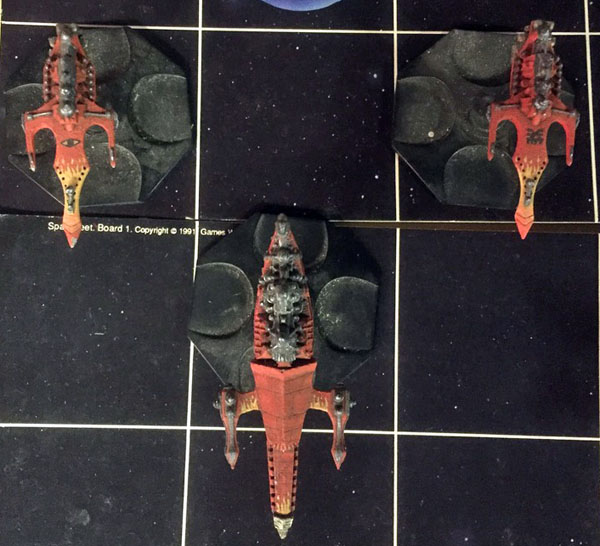 A Dictator Class ship, dedicated to the Blood God. This beast was all about boarding, his claws grabbed the 3 squares in front, and with sufficient dice he would stick the drill in and disgorge troops. Bear in mind these things are what, 3 miles long or summat…. 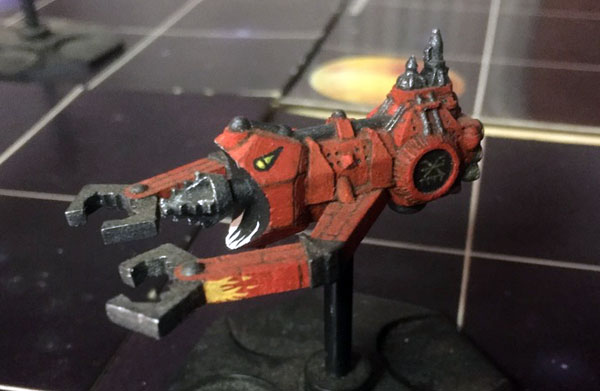 Dominator Class. This bad boy targeted 9 squares, represented by the box lid. You dropped in 6 dice, and they hit the actual squares the dice landed in. 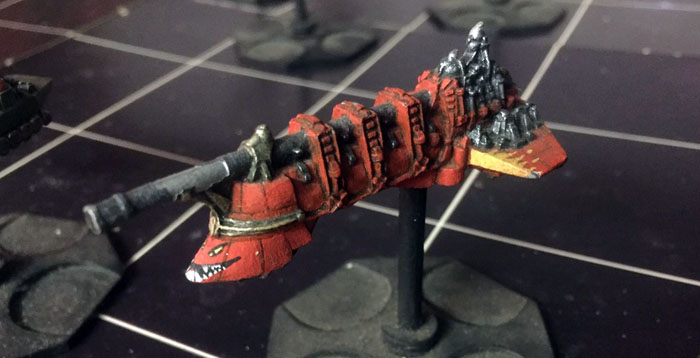 Tyrant Battleship – a mini-me for the Emperor Capital. 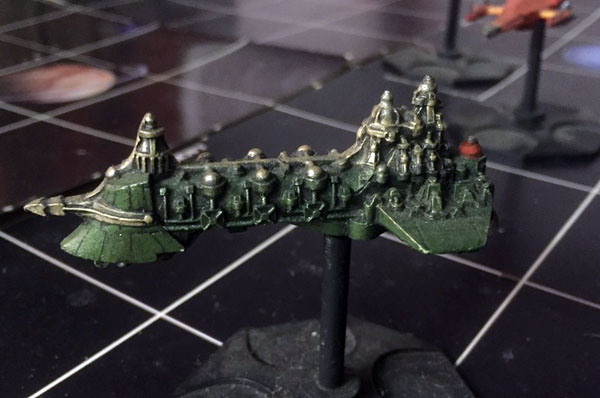 Next up, GW released Tyranids. Interestingly, some of the ships were re-purposed from an earlier citadel spaceship line. The Tyranids worked slightly differently, in which they had a number of command cards and took actions from these cards. The Hiveship contributed 6 – massive – and so, reflecting the fluff, a lot of battles became a desperate attempt to break the line, slay the Hive ship which would then disrupt the hive mind. Easier said than done…
L-R: Spore Mine, War Drone, Void Fiend, Doomripper Kraken. 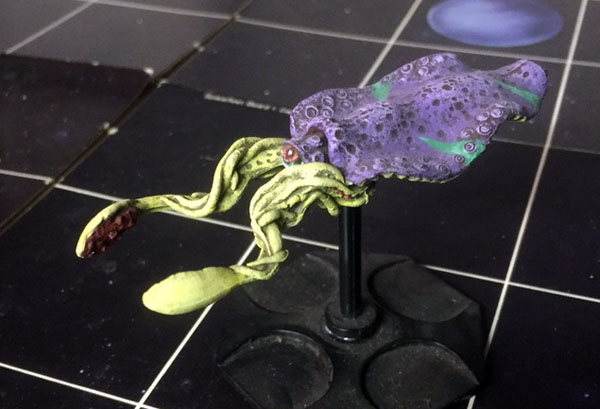