Today admirals we talk all about the mighty Mon Calamari ‘flying cigar’ and its role in Star Wars: Armada.

This is it. The Rebel Alliance’s ‘ace in the hole’ capital ship, its answer to the domineering might of the Empire’s Imperial Class Star Destroyer. Clocking in at 1,200 meters long and carrying more than 36 turbolaser cannons, 30+ ion cannon batteries, tractor beam projectors, and a complement of 120 star fighters, this ship proudly serves as the backbone of the fleet. Man your battle stations, ready your broadsides, let’s talk about the Mon Calamari ‘flying cigar’ and its role in Star Wars: Armada.

I’ve read the complaints, and no, at first glance the MC80 doesn’t stack up to the Imperial I or the Imperial II class star destroyer in-game. Neither the command cruiser nor the assault cruiser’s six dice broadside is equal to the firepower of the ISD’s eight forward arc dice. The ISD has eleven hull to the MC80’s eight, though the MC80 has slightly more shields: fifteen to the ISD’s twelve. Both have comparable Command, Squadron, and Engineering values, though the Assault Cruiser has one fewer squadron command, what with them being so focused on pounding the enemy with turbolasers. The MC80 is also much slower than either ISD type. So what makes the MC80 so special? Let’s delve a little deeper. 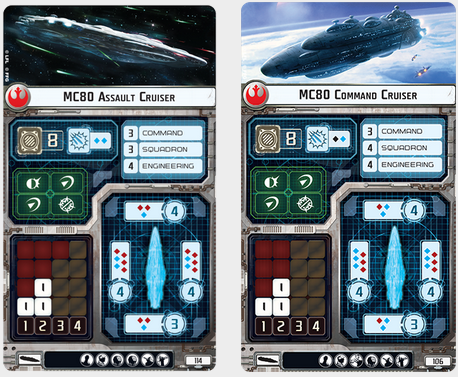 The MC80 has some of the best defensive options of any capital ship in the game. You can turn this thing into a serious tank, making it an almost impossible nut to crack. The assault cruiser has an unusual TWO defensive refit slots. You can pair Redundant Shields with Advanced Projectors or even Electronic Countermeasures, which amounts to making the MC80 a heavily armed mobile citadel. I like to throw in Engineering Captain as my officer, which allows me to repair the ship as needed. Ramus Antilles is also a good defensive officer choice, since he grants you that extra command token in addition to the basic engineering order for extra hull/shield repair as needed.

Now some will say: ‘a spaceborne castle is fine and good, but how do I prevent the enemy from outflanking me with those gladiators or a raider and hitting me in the MC80’s vulnerable rear?’ A fair point. That’s where Engine Techs comes in. One could argue this is the most essential upgrade on the habitually slow MC80, bringing it up to speed with the ISD, and making it slightly more maneuverable than the ISD with an extra yaw tick at the end of your ‘boost’ to speed 3. Remember, the ISD has no support team slot and can’t increase its speed; just watch out for those pesky Phylon Q7 tractor beams. Another, cheaper support option comes in the form of Engineering Team, which simply allows you to add insult to injury by granting your MC80 an additional engineering point, bringing the total to an astounding 5 a turn, or 8 if you couple the command with a engineering token. That’s two discarded damage cards and a shield recovered in one turn – two if you took redundant shields! Wow. 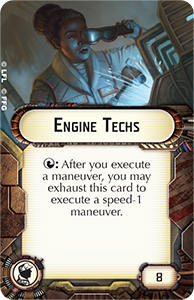 The Hammer and the Anvil

Let’s talk offense. Sure you’ve got the toughest ship this side of Endor, but what about firepower? Look no further than the greatest fish-headed Admiral the galaxy has ever seen, Admiral Ackbar. 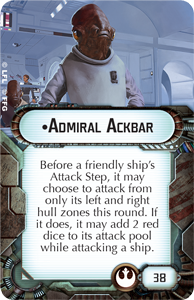 Ackbar capitalizes on the strength of the MC80, its broadside. When it comes to firepower I personally prefer the assault cruiser’s long range four red dice to the command cruiser’s three). Ackbar, though expensive, adds two additional red dice into the mix. Throw in Enhanced Armament or Slaved Turrets and that brings your total red dice value to seven per broadside – eight if your MC80 has the Defiance title and is attacking a ship that’s already activated, nine if you’re concentrating firepower; remember, that’s only your red dice! Be careful if you include the Slaved Turrets upgrade however, as some find its one attack a turn caveat rather limiting. Ackbar can feel restrictive too, if you insist on charging headlong into the fray; he wants you to fire those side-arc broadsides, often from a distance! If you really want to stack on the points toss in an ion cannon upgrade too: I like Leading Shots for its points efficiency: it really lets you get some value out of your dice when you’ve closed to medium range, and it lets you focus on banking those engineering commands/ command tokens instead of looking to reroll dice with a concentrate fire token. 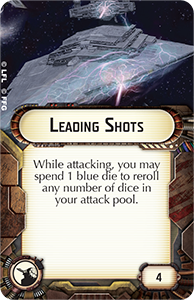 The command cruiser is a medium range bruiser, though again coupled with Ackbar and those turbolaser upgrades its long range potential is nothing to sneeze at. The command cruiser can realize its potential as a carrier: its squadron value is higher, and it has an offensive retrofit slot. Consider Boosted Comms or an Expanded Hanger Bay if you fancy flying those slick rebel starfighters (eight A-wing squadrons did help win a World Championship Final Match, after all).

The Stars are the Ocean

How do you fly these behemoths of the sky? Keeping them at long range of the enemy fleet is the safe choice, though skirting the board edge doesn’t lend itself to playing to certain objectives like Contested Outpost or Dangerous Territory. Fortune has often favored the brave in many naval actions throughout history, and here I’ll (mis)quote Admiral Horatio Nelson: “Never mind the maneuvers, just go straight at them.” Don’t be afraid to break through the enemy line with your MC80 followed by other side-arc monsters like the MC30c torpedo frigate! Your MC80 can (probably) soak the hits leading up to your dividing your opponent’s fleet in two, and then it can make full use of both its port and starboard broadsides firing in the same turn. Just be sure to bank those engineering commands and tokens for the inevitable repairs that follow. Oh, and watch out for those black-dice, ordnance-laden gladiator star destroyers backed up by Admiral Screed. Maybe don’t charge in to close range against those nasties.

And how do you incorporate the MC80 into your fleet? Well, you could make one the impenetrable anchor of your armada, but here’s something I haven’t seen talked about a lot – why not bring two? Heck you could even fit three in a list now that you have 400 points to play with, so bring the big guns and get cracking! Here’s a sample two MC80 list that is a lot of fun:

This list fields no squadrons, and that might prove problematic but for the MC80 Assault Cruisers’ two blue dice anti-squadron armament, coupled with their incredible resiliency. The Tantive IV is in there to either secure objectives and/or hand out command tokens.

Hope you all have fun flying these beautiful, hardy mainstays of the Rebellion. Good luck and good hunting!