Rick Priestley chimes on on Gates of Antares with an updated living errata document to correct the few mistakes. Take a look: 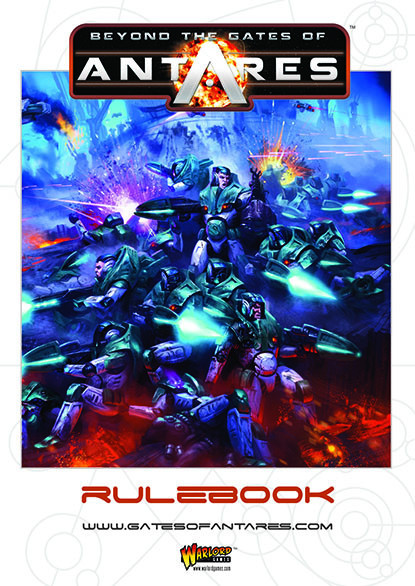 Take it away Rick:

In addition, this second version sees Rick penning a series of helpful Frequently Asked Questions (FAQs) to explain some of the common issues that have left players scratching their heads. Rick will be adding to this list over time if and when more puzzling situations emerge from IMTel!

I’m not sure whether a question can be ‘frequently asked’ quite so soon after a game has launched, but I guess these things are relative. Here are a few questions that have been asked together with my replies – Rick.

Q. Large models can see over units of non-large (let’s say smaller uh!) models – for example a Ghar Trooper can see over a unit of Ghar Outcasts. Can a large model see over smaller models that are part of its own unit?

A. Yes they can. The rule does refer to the situation where a unit of large models is drawing LOS over a unit of smaller models (it’s on p25) because that is the usual situation. However, where a unit comprises both large and smaller models the large models can ‘see over’ their smaller brethren and can be ‘seen over’ them as well. There aren’t many units that mix sizes in his way. However, the obvious case is the Matronite Brood Mother with Hatchling Swarms.

A. Yes they can. Models can always draw LOS over non-large models to shoot at a target that has the ‘large’ special rule. In these cases we imagine the target is sufficiently big that there is plenty of opportunity for the shooters to draw a LOS either over the heads of or past smaller models in the way.

Q. If a MOD unit is obliged to go down for some reason do you take a dice from the dice bag or turn its current dice to down? This is covered for down results on the damage chart (page 37) but not specifically mentioned in other contexts.

A. Yes you would take an order dice out of the dice bag assuming the MOD unit has at least one order dice remaining to play. Obviously, if the unit is going down because you have given it a down order, or failed an order test, or if you are making a down reaction, then use the order dice you are playing as you would for any other unit. If the MOD unit is obliged to go down in other situations treat it exactly like any other unit – i.e. you draw an order dice from the dice bag if there is one still to play, and if the unit has used all its order dice you turn the current order to down.

Q. Do large models get a re-roll of hits when they go down?

A. They do if they are entitled to them as described on page 29.  Infantry and weapon teams (and equivalent command and beast units) get this re-roll bonus regardless of whether they are large or not. Of course – there are very few models that are both infantry and large – but Ghar Troopers are the notable exception and they do benefit from the re-roll if down.

Q. If a heavily armoured target is hit and suffers damage from Spiker Scrub (i.e. on the roll of a 10) does it take a pin?

A. Yes the unit would take a pin in that case, the Spiker Scrub is treated as a shooting attack with a strike value of 0 so a pin is only inflicted where damage is scored.

Q. Can a large model with the Rapid Sprint rule make a sprint even if it doesn’t have the Fast rule? Normally, large models are not allowed to sprint unless they are also fast.

A. Yes if a model has the Rapid Sprint rule then it is allowed to make a sprint or rapid sprint even if it is large and would normally be disqualified from sprinting.

Q. Does a unit making a rapid sprint force re-rolls to hit in the same way as a fast unit?

A. No it doesn’t. Only units that have the fast rule benefit in this way. Although units making a rapid sprint might be making a speedy dash compared to their normal speed, units with the fast rule are generally very agile, rapid and manoeuvrable and this is why they get the bonus. I.e. they are not just moving quickly but also weaving, ducking and diving and presenting a difficult target.

Q. If the Ghar Distort dice is drawn and the next order dice is for a Ghar unit (which means the dice must be used to give a down order) can the order be used to activate a Plasma Dump?

Q. If the Ghar Distort Dice is the last dice drawn from the bag does it affect the first order dice drawn in the following turn?

Q. If an Algoryn AI unit is given SlingNet and/or Overload ammunition as an upgrade, is the +5pts paid for every model in the unit or just for those models armed with micro-x launchers or x-slings. Also, can I choose to so equip some members of the units but not others, or is it necessary to upgrade all models that can be upgraded?

If you upgrade the unit you must give the special ammo type to all the unit’s models able to make use of it, and you pay the points for the models you so equip. So, if you have a 5 man unit with the leader armed with an x-sling and one trooper armed with a micro-x launcher you pay 10pts and both models carry the special ammo. Note this is the same as for grenades – for example – you pay per man but must give the entire unit grenades; with the special ammo types the only difference is that only a proportion of the unit’s models are equipped with weapons able to fire them.

Q. SlingNet ammo specifically doesn’t affect heavily armoured targets, is the same true of Net ammo, and in both cases how do you define ‘heavily armoured’ as neither type of ammo has a strike value (SV).

A. The exception only applies to SlingNet. SlingNet is a kind of low intensity version of the suspensor net that doesn’t affect larger and more powerful targets. All targets with a Res of 11+ once SV has been taken into account are heavily armoured – so although SlingNet has no SV any target with a Res value of 11 or more is ‘heavily armoured’ and therefore immune. Net ammo, on the other hand, affects all targets whether heavily armoured or not, and is therefore equally useful against vehicles, Ghar troopers, Brood Mothers, etc.

If you have any further rules questions, please post them over in the Warlord Forum – where we’ll do our best to address them, and who knows – your question may well find it’s way into a future errata!

~ It’ very very nice to see GoA off to a solid start and being quick and responsive with thier Errata and FAQs!