Collectors and hobbyists alike are snatching up Bretonnian miniatures, BEFORE they go on Last Chance Clearance. Come see!

It looks like Die Hard Collectors of Bretonnia are not waiting for their beloved miniatures to get axed, and have begun to feverishly snatch them up from both UK and US Games Workshop sites:

It has started… We have 3 main zonez – uk-Europe, Usa-Canada and Australia-new Zeland. On Uk
https://www.games-workshop.com/en-IE…at440002a-flat on uk pegasus is sold out, treb and grails are email me bar
on US only 7 positions are not temporary out of stock – but pegasus knight is still here

Australia and New Zeland all is present in Stoick for now – but its not a wonder – you can still buy many tomb king models there, though their range thins down drop by drop… Hurry up guys.

The Bretonnian models are being bought up in the 3 main sales regions: The UK/Europe, US/Canada and Australia/New Zealand regions. In UK/Europe The Pegasus Knight is sold out and the Trebuchet and Grail Reliquae have the “email me” tab. The US site has more “in stock” than the UK region but still has some missing items. The Australia/New Zealand Region has everything in stock and it’s not a surprise as they still have Tomb Kings in stock (basically Fantasy doesn’t move there). 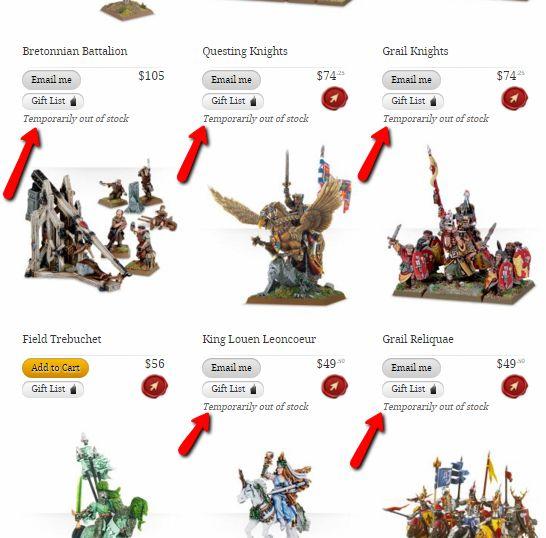 We reported earlier that Bretonnia was on their way out:

The silver lining is that you should look for a rebirth of new “Sigmarized” incarnations of these races (if not their specific sub-factions) with drastically updated and new aesthetics.  Just as the Fyreslayers were a new “puffed-up” take on the 1980s Slayer motifs, you should look for much more dramatic and fantastical takes on the retired factions when they get their turn in the sun.”

With a tagline from the article like: “Jump on those Brets if you like them. Who knows how long they will last…“, it looks like folks did just that!

Charge out one, last, time….