Genestealer Cult and 40k: What to Expect From The Codex

Everyone knows a Genestealer Cult Codex is only a matter of time – but what will be in it?

I don’t think anyone doubts that a Codex Tyranids: Genestealer Cult (if they follow the syntax from Eldar or Adeptus Astartes) is on the horizon in the next 2-3 months. It hasn’t fallen into the rumors yet, but there’s no way GW would put all the effort into making no less than EIGHT new units for a Genestealer Cult and not give them at least the mini-dex treatment a la Harlequins and Ad Mech. I already tried my hands at predicting the Genestealer Cult’s Rules for 40k….now let’s see if we can predict what changes will come with the codex!

These are mostly speculation. You see, we already have the datasheets for the Ghosar Quintus Broodkin and their individual units- each named, with all three HQ choices unique characters. However, with zero options (additional wargear, weapon choices, relics, additional models in a unit, etc), it’s clear these are meant to be used as-is, because they are specific to the Ghosar Quintus cult.

So let’s take a look at what we’re likely to see, make a note that the stats on these units are unlikely to change- same WS, BS, W, etc. 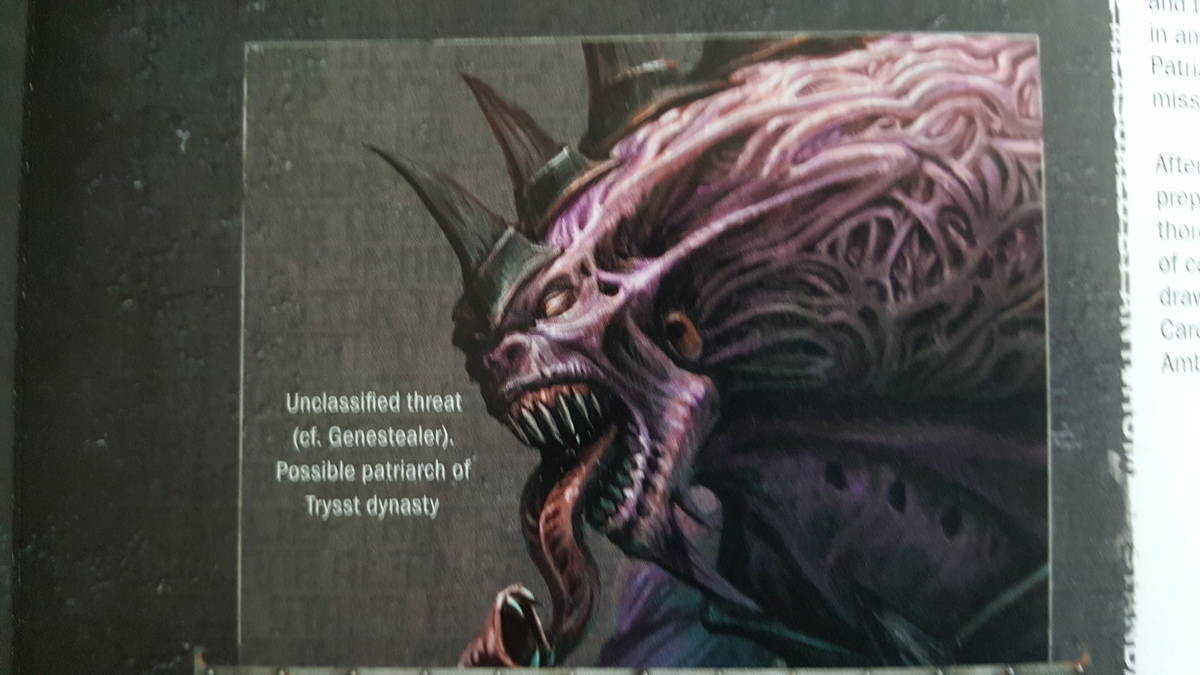 Patriarch Ghosar has a huge number of special rules to him, but these all make sense for a generic Patriarch as well, expect the Genestealer Patriarch to retain all of these rules, and most likely the Patriarch’s Claws weapons and psychic powers as well. Only real options I can see is potentially Genestealer biomorphs (iffy at best) and purchasable Genestealer Familiars- probably 2 of these at most since the Patriarch already has an obscene number of rending attacks. 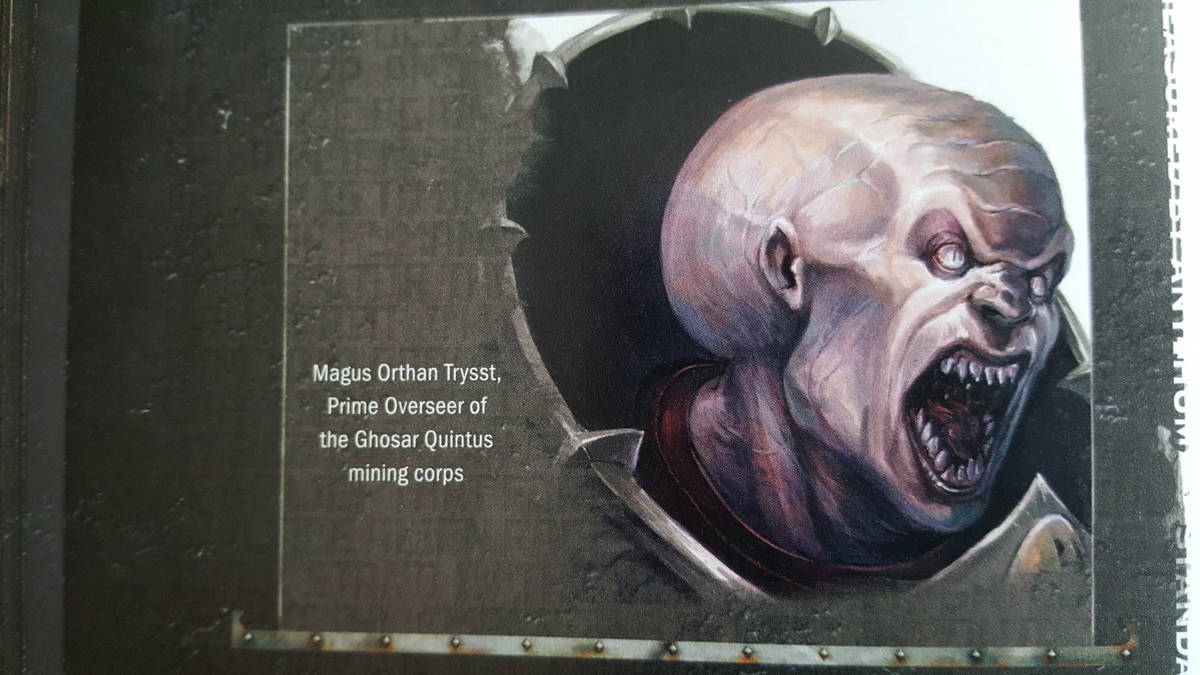 Magus Trysst is a pretty basic unit- Force Stave, Autopistol, Imperial Guard/Astra Militarum commander stats, 2 wounds, and a 5+ save. Mastery Level 2 with Telepathy makes for a useful support unit. With the basic, unnamed Magus, expect more weapon options than just the Autopistol- possibly Laspistol, Plasma Pistol, or a Bonesword. Again, Genestealer Familiars are likely to be a purchasable upgrade, as are relics and probably blasting charges (assault grenades). I still wouldn’t rule out the possibility of buying a Conversion Field Generator or other invuln-granting wargear, considering how important he is to the Cult. Trysst also gets a Force Stave, which may be unique to the character or a purchasable upgrade (or even the standard wargear) for a vanilla Magus, granting him some decent close combat potential if you take into account his WS4 and I4. 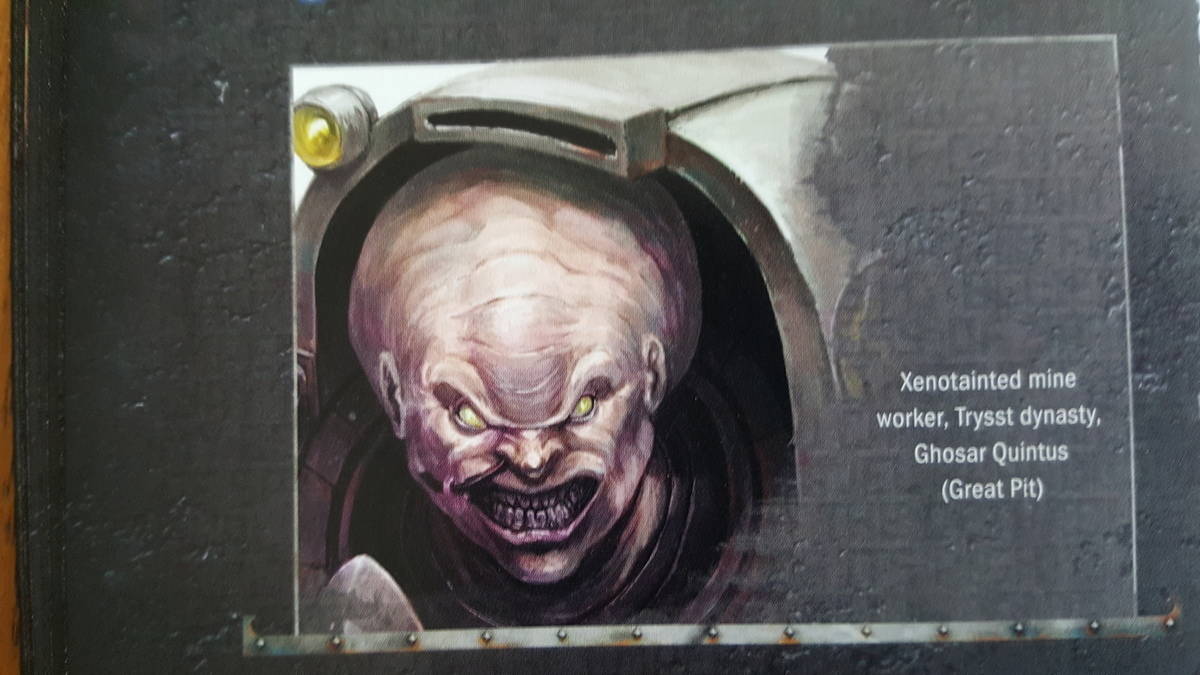 Magus Trysst’s….uncle? father? Whatever he is, the Primus is a straightforward combat character clearly designed to lead a unit of Genestealer Hybrids into battle. Zealot is a potent force multiplier- especially when he’s leading 1st and 2nd Generation “Acolyte” Hybrids with their 4 attacks on the charge. Rending and an AP3, Instant-Death causing Bonesword make him a force to be reckoned with in a challenge, as well. The vanilla version of this guy will likely be very similar, but expect a ton of different weapon options- I wouldn’t be surprised in the least if he has access to autopistols, shotguns, plasma pistols, melta bombs or demolition charges (some kind of mining equipment equivalent), and possibly heavier armor, as that 5+ isn’t going to keep him alive for very long. He’s another strong candidate for purchasable Genestealer Familiars- though since they’re psychic manifestations now, that might be a long shot. 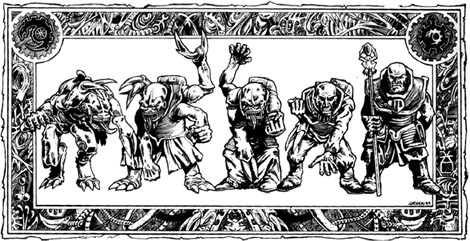 Acolyte Hybrids of the First and Second Circles (Generations), these guys are incredibly cheap at about 7 points a piece, with rending claws, autopistols, and close combat weapons, all with assault grenades, fearless, and high weapon skill, strength, and initiative. The Favored Disciples datasheet is only 12 models…but as a troops choice in the codex, expect Acolyte Hybrids to be a horde unit- topping out at 20-30 models easily. With their cheap points cost and low armor save of 5+, they’ll be dying in droves, so you’ll need/want to take them en masse. For options, I imagine poisoned weapons or some sort of “bone knife” is a likely choice- some of the miniatures in Deathwatch: Overkill seem to be modeled with these already, though of course it could just be aesthetic. Since the 3rd Generation Hybrid with a mining laser is mentioned as being strong enough to heft his weapon with three arms, it may be possible Acolyte Hybrids get access to a heavier melee or shooting weapon too- like the power picks or power hammers of the Aberrants. Or possibly even some sort of mining drill to suit their delverworld heritage.

Neophyte Hybrids- 3rd and 4th generation and thus more humanoid, these guys have guardsmen stats almost exactly- save for I4. They, too, come in a big squad- 16 strong with two special and two heavy weapons: grenade launchers and mining lasers, respectively. The rest of the unit comes standard with autoguns. I’d expect these to be your defensive units, objective-campers and gun line with (if the datasheet is any indication) even greater numbers than their Acolyte Hybrid kin. They seem kitted out for ranged combat, though it’s possible we’ll see some flexibility. Options such as shotguns, close combat weapons (and maybe autopistols), and assault grenades are possible upgrades we could see. At 110 points for the 16-man squad with all the special and heavy weapons, they’re looking at about 5-6 points a piece and a bit more tactically flexible as a ranged unit.

Your classic purestrain genestealers, these guys haven’t changed much since the Tyranid codex, it seems. 30 points for 2 models puts them at a decent price, and the addition of Hit & Run makes them good for stringing multiple charges “bouncing” in and out of combat. However….they’re still pretty squishy against bolter fire. The fact that you only have 2 of them in the Purestrain Princelings datasheet is a bit of a head-scratcher: either they’re going to be exceptionally rare in the Genestealer Cult codex, or we’ll get to use full broods of them with a new plastic kit to match the Deathwatch: Overkill versions.

The Genestealer Aberrant models are gruesome, malformed creatures unveiled when the Genestealer Cult marches to war…and they do not disappoint! Equipped with unwieldy power weapons granting increased-strength attacks with AP3 and AP2, they are going to hit hard. 2 attacks and 2 wounds a piece is pretty meaty, and to keep them in the fight they have Stubborn and Feel No Pain. They’re going to need that, too, striking last and with only a 5+ armor save. You’re going to want to protect these guys. 120 points for 4 makes them pretty affordable, so long as their T4 doesn’t get them insta-killed by high strength guns, but even still they’re large, imposing models that your opponent will target early on. These guys are an entirely new unit, so options-wise I can’t even fathom a guess as to what they may get in the Codex. We may see some armor, or stim injectors or something to improve their Feel No Pain. Considering their *ahem* aberrant nature, we may see mutations or biomorphs for them, as there are a lot of possibilities hinted at in their background. 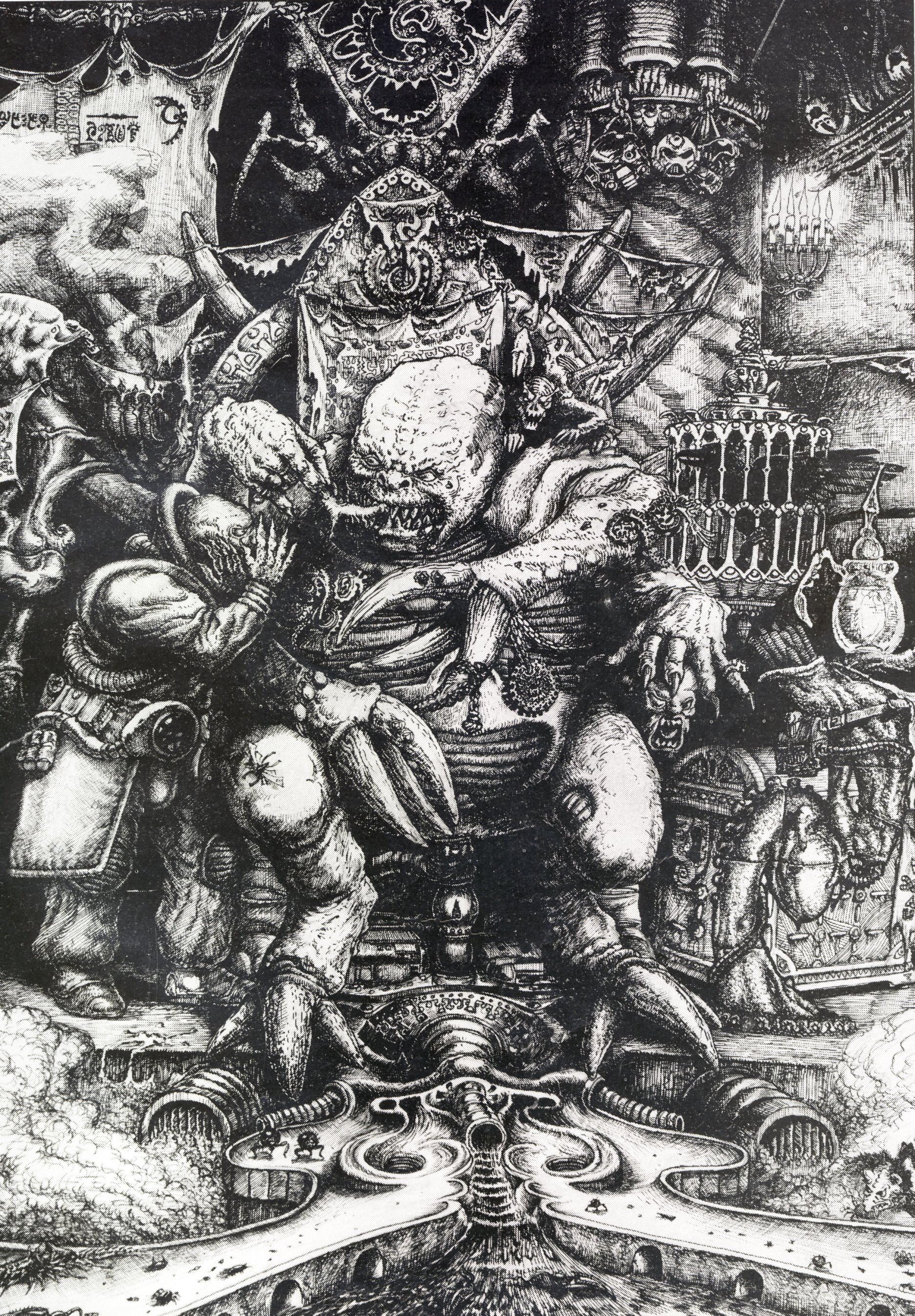 So how will the army play, now that we have a real look at their rules? Well we have a lot of rending and infiltrate amongst the different units, many of which specialize in the Assault Phase. Furthermore, the formation for the cult encourages first-turn assaults. Everything in the army (except for the Patriarch) has a 5+ save and T3-4 max, so fragility is an issue. With both psyker HQ choices being Mastery Level 2 and using Telepathy, you’re very, very likely to get some worthwhile abilities such as Invisibility, Shrouding, or Hallucination to protect your Hybrid and Aberrant squads from early-game shooting. Likewise, abilities such as Psychic Shriek, Terrify, and Dominate can debuff your opponents’ vital units in a big way.

When it comes to running characters joined up with your units, think supervillain. With a 5+ armor save and no invulns available yet, your Magus and Primus aren’t built for challenges. The Primarch can swing with the best but even he might be brought down by 2+/3++ type characters. Decline any challenge and let your minions do your dirty work, then strike when the character is next able to pile in!

The Cult Limousine is an iconic classic from 2nd Edition. With the industrial aesthetic and Delverworld origin of the Ghosar Quintus Broodkin, I expect this to be less….glamorous. Probably no longer a limousine, it will likely be a Cult Technical or the like, a big, rugged truck or mining rig- rumors have pointed to something like an open-topped, stripped-down Taurox. In fitting with the Genestealer Cult’s playstyle, expect something very similar to an Ork Trukk- fast, fragile, and possibly an assault vehicle.

This choice is a tricky one for the Genestealer Cult…they’re an assault-focused army, with few “big guns” and they’re supposed to represent a secretive Cult that’s scraped and scrounged together and stolen whatever it can to make ready for its rebellion against the Imperium. Many fans thus far have bemoaned the lack of an Imperial Guard ally, which would be fitting as the Cult spreads its influence- so a hijacked Leman Russ is not beyond possibility. However, again given the mining equipment and delverworld origin of Ghosar Quintus, I expect some sort of heavy mining drill, similar to the ones used by the Death Korps of Krieg, or the old Mole vehicles from epic.

These are, of course, something of a toss-up. We could get anything here, though most codexes seem to give 1 or 2 relic weapons, a banner or other leadership-granting icon or banner, a utility item or two which grant advantageous USRs, etc. Hell, we may even get the Patriarch’s classic throne just for a good 2nd-ed throwback.

~What do you think the army will get and most needs as it transitions to a full codex?