Fantasy Flight Games has a new update for all you X-Wing Aces out there – come see the latest changes!

Fantasy Flight Games has released their March 2016 Rules changes for all of their Star Wars competitive systems:

The time has arrived for another update to the FAQ and tournament regulations for our Organized Play games. These two documents, along with each game’s original rulebooks, provide players with everything they need to know about their favorite game.

Not Just For Tournaments

Tournament players aren’t the only ones who should read the new FAQ and tournament regulations. In each document, you’ll find answers to many of the most commonly asked questions and rulings. Whether you’re looking to vie for the title of World Champion or play in the comfort of your own home with family and friends, the updated FAQs and tournament regulations offer clarity and structure that will give you a better play experience.

Now in particular I’d like to take a look at the X-Wing changes. There weren’t a ton but they did have some good rules clarifications and erratas.

They updated the FAQ for all the new ships and upgrades (things like the Tractor Beam Reference Card). They also changed the wording on a few cards but the change to Autothrusters is designed to help clear up any confusion:

They also added some clarification on “Inside Arc at Range X” as well: 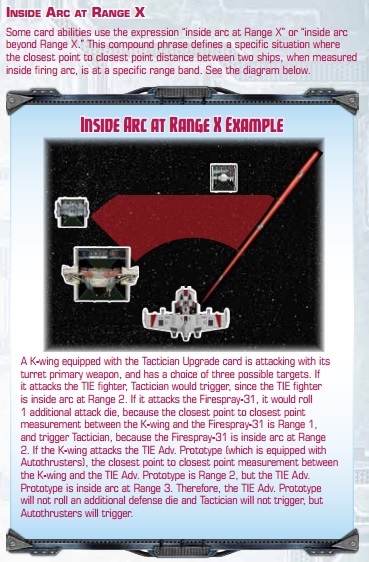 Oh and they also answered a few questions about Boba Fett’s Ability:

I’m really glad they cleared that up because I was worried about how exactly he would interact with some of those other things.

There are many more changes but nothing world-shattering. Overall I’m glad Fantasy Flight Games takes the time to answer these types of rules questions and clarifications as it really cuts down on the arguments and lets you get back to playing the game. Kinda of makes you wish some other company would do the same.

Keep it up Fantasy Flight Games, May the FAQ be with you!