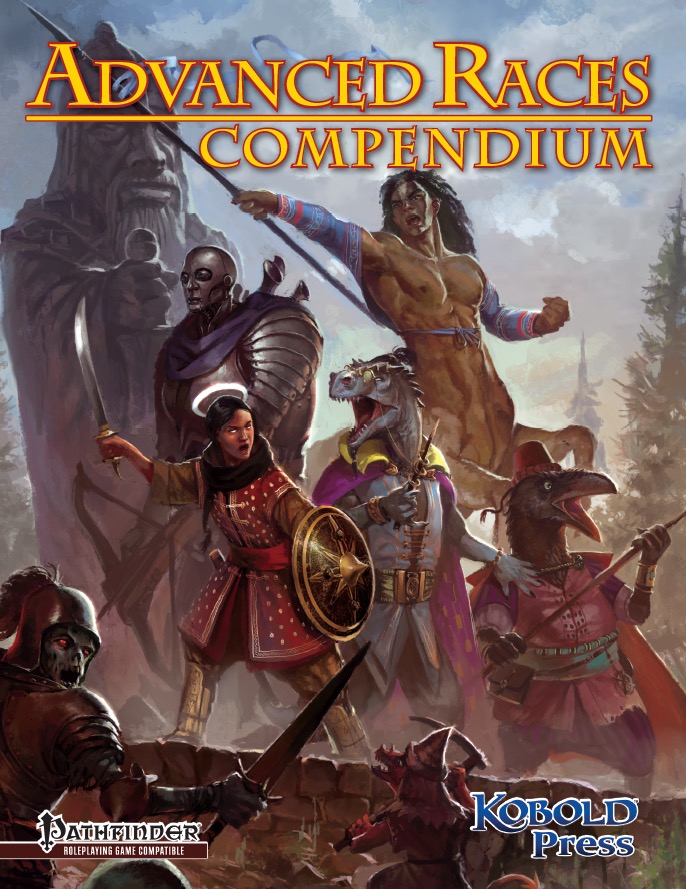 The Tabletop Spotlight is on The Advanced Races Compendium for Pathfinder RPG!

Our friends at Dragon’s Lair Comics & Fantasy brought over a handy play-aid from Kobold Press for this Tabletop Spotlight – It’s the Advanced Races Compendium! From the cover my first thought was “Do Centaurs wear pants?” but aside from that – I had a feeling that this book was packed full with all the “other” races in fantasy RPGs. But what I wasn’t sure of was exactly which races and how in-depth it was:

There were over 21 races with a few more “Were-” races as well. Each of the races has a ton of info about the races ranging from how they look, to how society treats them, as well as how they develop relationships relative to other races as well. The book also has alternate rules and traits that can be used for playing these races so it’s not just a ton of background – it’s got practical rules applications as well. And speaking of rules, this book also has Favored Classes, Racial Archetypes, and race specific magic and magic item. It really does have everything covered for each one of these “other” races to play.

This book is a great resource for GM’s that want to create unique NPCs or even new antagonists to torment the players. Players will get a kick out of this book as well with it’s plethora of player options to choose from for character creation! So if you’ve ever wanted to play a Gnoll, a Minotaur or a Wereshark then this is the book for you!

The Advanced Races Compendium gives you everything you need to play a monstrous adventurer in Pathfinder Roleplaying Game. Its pages are packed with PC racial feats, traits, spells, bloodlines, gear, magic items, archetypes and more for Gearforged, Lizardfolk, Kobolds, Tiefling, Gnolls, Shadow Fey and more—and it’s easy to adjust these classic and new races to suit your campaign’s power level.

Play as your favorite monster and carve out a new legend in your campaign, with the Advanced Races Compendium! Get your dice out, and roll up a:

Get Advanced Races Compendium today and play a minotaur corsair smashing through foes, a sly kobold darting nimbly around and wreaking havoc, a gearforged warrior powered by steam and magic, and much more!

So many options! But seriously, do Centaurs wear pants?