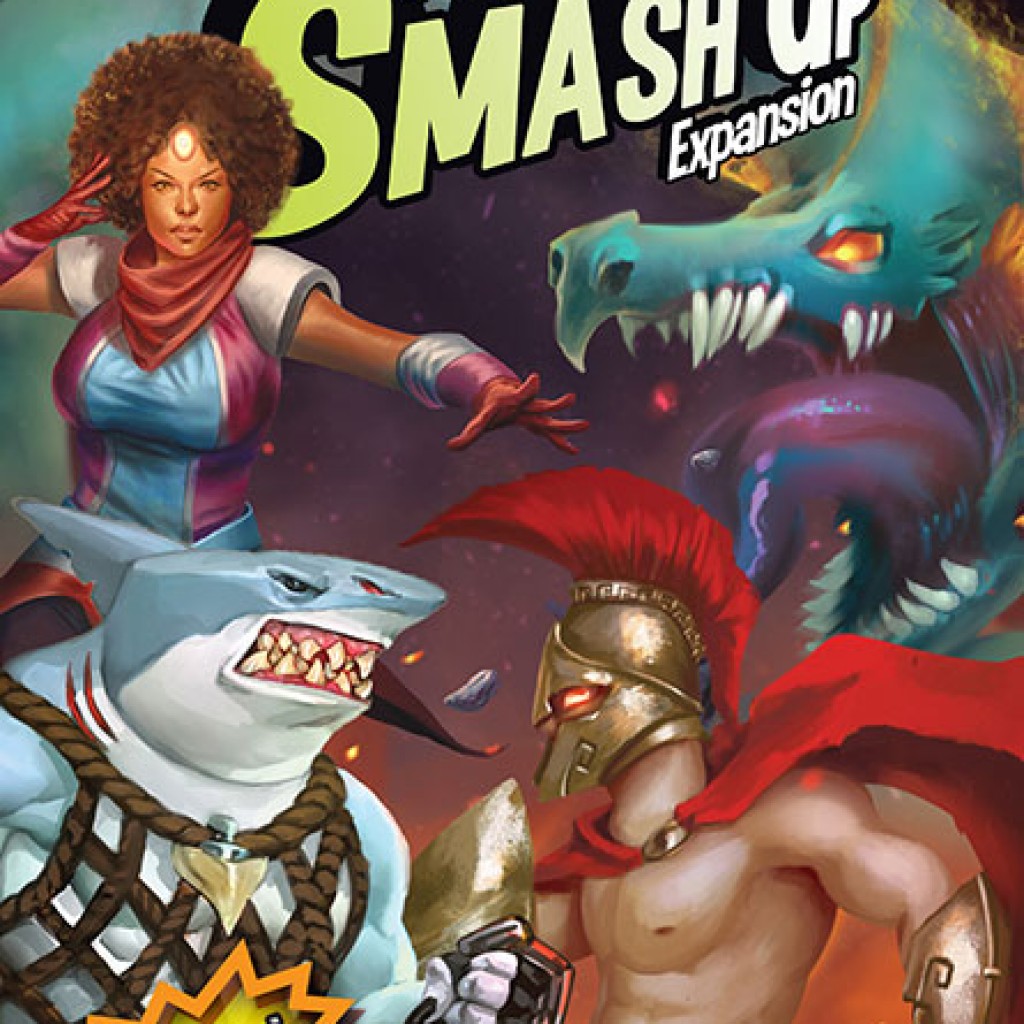 The Tabletop Spotlight is on the latest Smash-Up Expansion: It’s Your Fault!

I a BIG FAN of the Card Game Smash-Up. So when our buddy Drake from Dragon’s Lair Comics & Fantasy pulled the latest Expansion out of his magic bag of goodies I knew we were in for a treat!

I will play Smash-Up with my friends all day if I had the chance. If you’re not familiar with the game here is what AEG has to say about it:

In Smash Up players take two factions, such as pirates, ninja, robots, zombies, and more, and combine their decks into a force to be reckoned with!

When the game begins, players take turns drafting one of several faction decks.  Once each player has two decks, they shuffle them together, combining their distinct abilities into a unique 40-card deck.  Players then deal out a number of Base cards, and play their decks to attempt to have the most power on a base when it is scored.

It does sound deceptively simple but that’s the beauty of this game. It’s really easy to learn but because of all the different combinations of factions and powers things change every time I play. I love learning how each faction works and how those factions pair with and interact vs other decks and factions. And because it’s a race to see who can score the most Victory Points the competition can be very engaging. Once you get a game or two under your belt and everything clicks it gets really interesting – and watching a new player have that “Ah-HA!” moment when it clicks is pretty enjoyable.

So on to this new Expansion Pack: It’s Your Fault! Let me just start by saying Smash-Up is an LCG – so all the expansions have the same cards. No need to go hunt for random packs and “waste money” on cards you just don’t care about. This expansion is particularly unique because it’s made of factions that were voted on by the fans. They had a bracket on their website and the fans got to vote who would win – hence the name! Those big winners were: Sharks, Super Heroes, Mythic Greeks and of course DRAGONS!

If you watched the video you’ll also notice there was a few surprises in the box, too. I won’t spoil it for you but lets just say it has something to do with a “Shark Delivery System” which is another nod to the pop-culture themes this game draws so heavily from.

Overall, this box is a perfect addition to the game of Smash-Up. The art work is full of in-jokes and pop-culture references (just like the base game and the other expansions). AEG also had different artists work on this game so each faction has it’s own unique look and feel. I just picked-up my copy of the game and I’m planning on playing this weekend with some friends with the new factions. I really want to recreate a “Marvel’s Zombie Universe” theme deck by having a Zombie Super Hero deck. Or maybe I’ll try out Sharks with Steampunkers because what’s more JAWESOME than Sharks with Gears? Wizards and Dragons are natural enemies – so maybe I’ll Smash-up those two decks and see how they play together. The combinations are endless* with over 40 factions in the mix these days. I put my own money down for this game, the fans voted on the factions, and it’s hours of fun waiting to be had – Go check this one out!

You’ve done it this time …

We asked for your help and this is what you get — Dragons, Mythic Greeks, Superheroes, and Sharks!

You’ve made one of the best Smash Up sets ever!  We let the fans vote and determine new factions for Smash Up, and you came through with some awesomeness. All four factions in this box were the top of thousands of nominations, and then survived a bracket vote, all to get to you today!

Smash Up: Its Your Fault includes Sharks, who plan to make chum of their opponents. Also inside you’ll find Superheroes, flying off the comics page to defeat enemies.  You chose to bring the legends of Greek Myth to the table, and finally the imposing might and destructive power of Dragons! 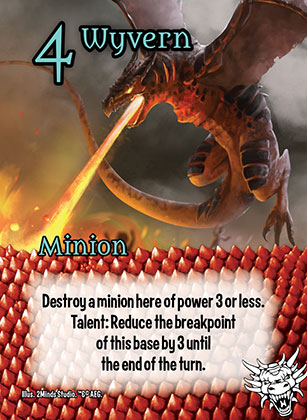 Dragons
Here there be Dragons! These massive monstrosities of legend have come to Smash Up, and they took smashing bases literally. They have little time for your opponent’s shenanigans, for other factions are crunchy, and taste good with ketchup. 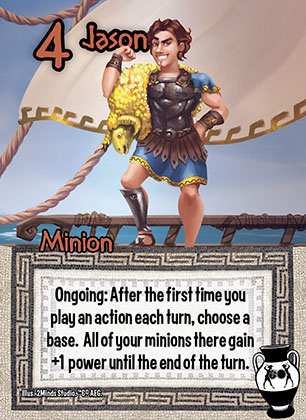 Mythic Greeks
This is the story of a time long ago – a time of myth and legend. When ancient gods were petty and cruel, and they plagued mankind with suffering… The ancient gods and heroes of Greek myth have returned, bringing their factors and  curses, heroics and bravery to your base battles! 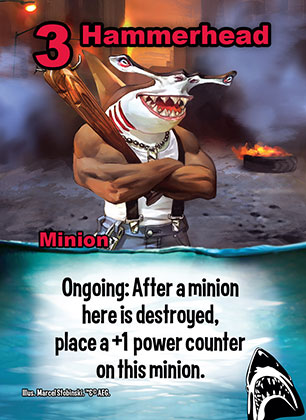 Sharks
The most perfect killing machines. Predators that have evolved to the apex of their realm. And now they want our realm! Sharks are coming on land to show that they have what it takes to be at the top of the food chain in and out of the water. Just when you thought it was safe to go back to the convenience store… 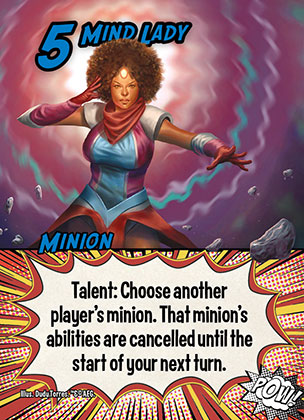 Superheroes
Faster than a speeding bullet. More powerful than an aggromotive. Able to leap tall Nukebots in a single bound… The mighty power of the comic page comes to life!  Defeat your arch-nemesis with super strength, speed, and toughness. Then find out who wins the base in the next exciting issue!

Smash-Up: It’s Your Fault! In stores now – So go pick it up and PLAY!

*It’s not quite unlimited but the math is (40!) – that’s 40 factorial worth of combinations. Fun times.

Author: Adam Harrison
Writer, Editor, Texas Native, and Austinite for 15+ years, Adam covers all things Tabletop Gaming. Which includes Warhammer 40,000, Age of Sigmar, D&D, Board Games and everything else that involves dice, boards, cards and a table. A hobbyist, player, and collector of miniatures and games, Adam's current obsession are his Death Armies for Age of Sigmar, his Blood Angels and Tyranids for 40k, and his ever growing Arkham Horror: The Card Game Collection.
Advertisement
Card Games LCGs Tabletop Spotlight Unboxing Videos
Advertisement 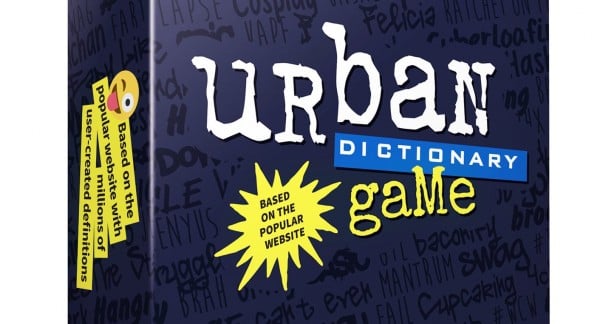