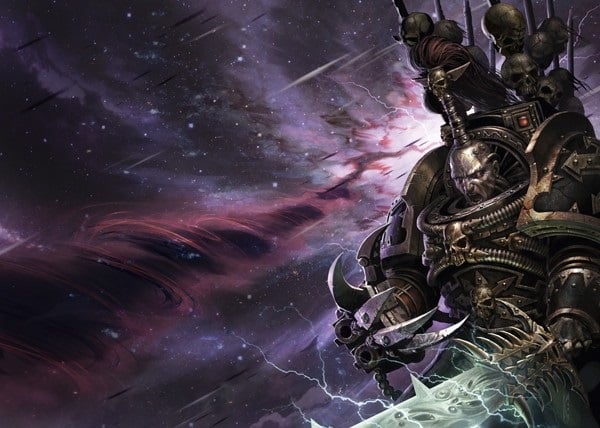 New Chaos Rules? Yes, for the first time in four years Chaos is getting some new rules well sorta… Come see the latest rules for Chaos!

None of the Chaos stuff has made a splash for a lot of die hard Chaos players, it seems like it’s all just Dinobots and Cultists. When you look back at the 3rd edition codex, which I just did a review of here, it’s a far cry from what it was.

This was the first update, over 7th edition, for Chaos in particular. I’m not 100% sure if this is new or old, my iPad updated itself and it let me update the new book early. I saw the new cloud icon and woooop there it was. Thanks Steve Jobs!

I’m going to apologize in advance for the screenshots I wanted to get this done and out to you as soon as possible because we have SO much coming out this week right?

First off the book  has all the normal Supplemental infos, the Introduction, the fluff and background, et cetera.

In the actual army book section, it tells you how it works, and that of course just like the Ork book it tells you that you can use the Chaos Artifacts in addition to the Chaos artifacts from this Codex as well. Booya! 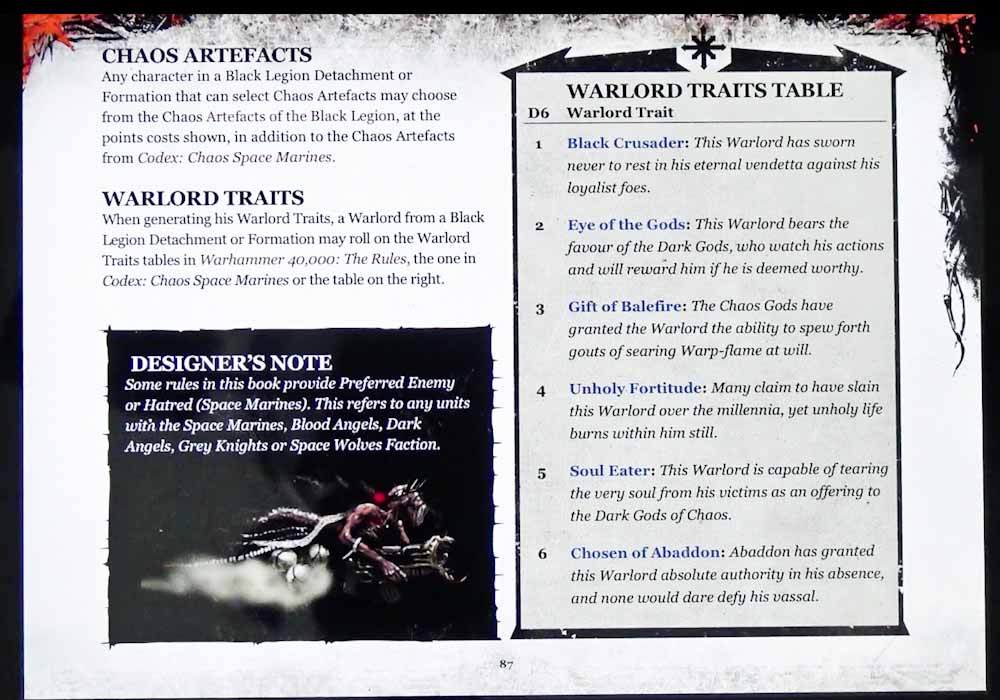 The warlord traits look the same; but remember this new codex overwrote my old version so I can’t say for sure. If you notice this is different please tell us in the comments!

The big highlights in the Warlord Tables are the Preferred enemy and the It Will Not Die traits. Having played Heldrakes at Adepticon the it will not die warlord trait was great in my opinion, like MVP almost!

As for the Artifacts, I like the Crucible of Lies, it’s a solid choice. I also like the Skull of Ker’Ngar, which for 40 points is great and even gives Eternal Warrior (one of Chaos’ big weaknesses). 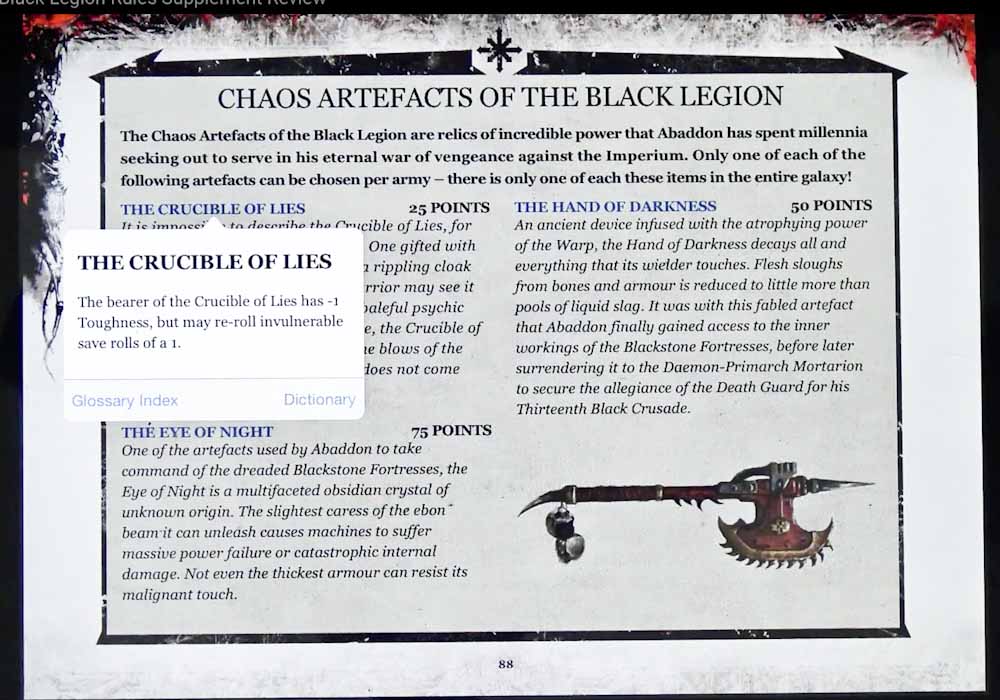 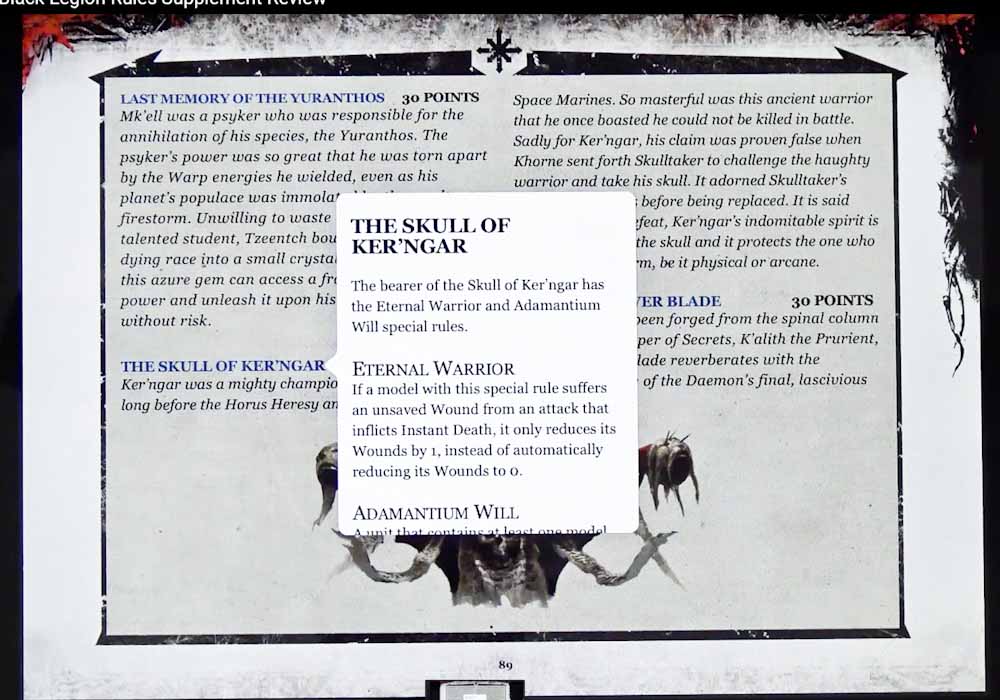 I like the Bringers of Despair, it gives a WS and BS boost as well as granting a Re-Rolls for Look out Sir for Abaddon himself. The true gangsta of Chaos. 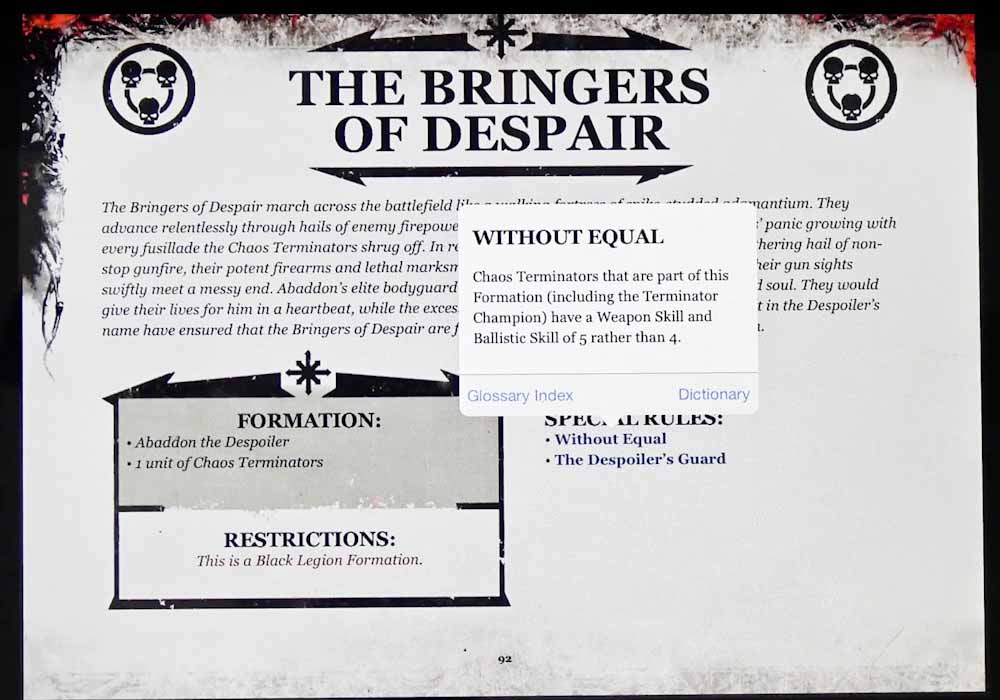 The chosen of Abaddon is also amazing because it confers Fearless, that’s huge for Chaos. Bring a squad of terminators in a Spartan and that’s a solid choice. 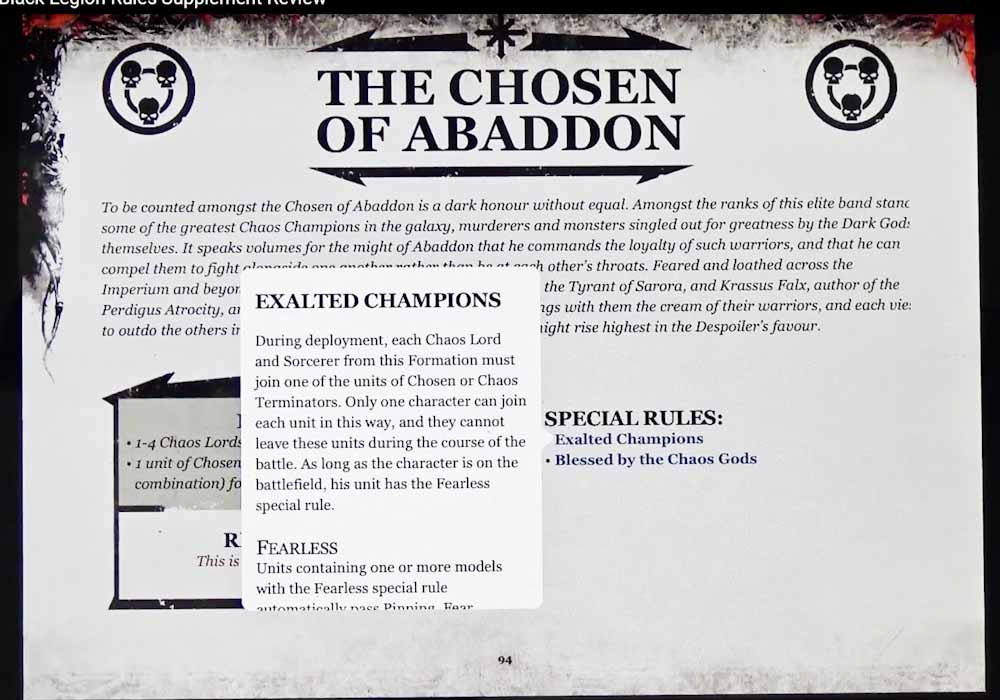 The Hounds of Abaddon is great because it lets you take the Mark of Khorne for free and anytime you can generate more attacks with rage is a good time. It also grants Let Slip the Hounds, which lets units in the formation run and charge once per game after the first turn. Khorne’s Favor gives +1 strength if you make a charge roll of 8 or more which could be great if you can get your enemy down to Toughness 3 to start dealing out instant death.

There isn’t a Decurion style formation, only a Black Legion Warband Formation which is pretty nice but in the grand scheme of things it doesn’t give it enough to make it competitive.

The book, in general, isn’t enough to make Chaos Competitive again; sadly I think this is just a fluffy book.

These are just a few of the highlights from the book, if you want a page-by-page, rule-by-rule review of the new book check out the video!

Author: Robert B
Robert is a veteran tabletop and miniatures gamer, and writer with over 20 years of experience. His specialtiesies are the worlds of Game's Workshop's Warhammer. He began writing for BoLS In 2010.
Advertisement
Chaos Marines Review Rules Videos Warhammer 40k
Advertisement