Fantasy Flight Games’ latest War Pack for the Death World Cycle has been unveiled – The Search for Truth Begins! 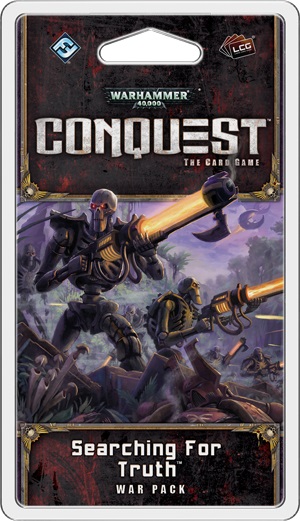 Fantasy Flight Games is proud to announce Searching for Truth, the fourth War Pack in the Death World cycle for Warhammer 40,000: Conquest!

Journey once more into the treacherous jungles of Nectavus VI with Searching for Truth, the fourth War Pack in the Death World cycle for Warhammer 40,000: Conquest! Like the rest of thiscycle, this expansion focuses on the new Deep Strike keyword, offering plenty of new cards that you can play facedown, only revealing them when it’s most advantageous to you. Elite units continue to gain power, and a new Necrons warlord invites you to reap the rewards of repairing your warriors and keeping your armies fully operational. Nectavus VI will run red with the blood of warring armies, but only one faction can claim the final victory. 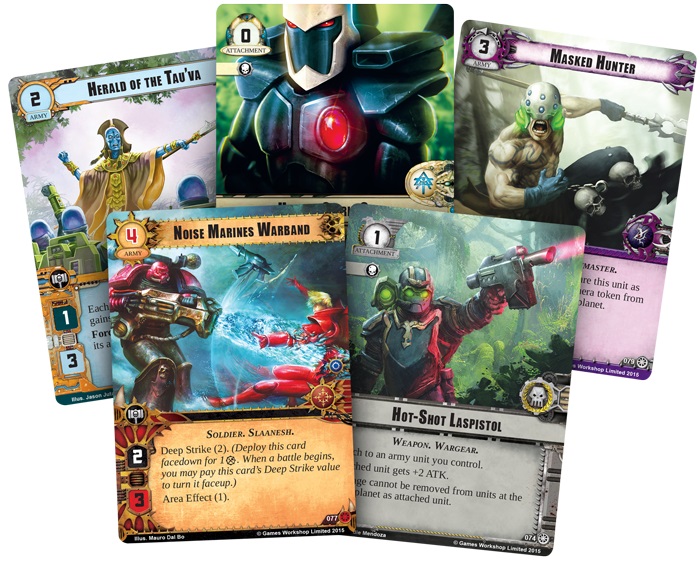 A Scholar of Life

For hundred of years, a Necron lord has waited on Nectavus VI—waiting for the day when the Warp would break free and he would behold the death of an entire planet. As that cataclysmic event erupts around him, Illuminor Szeras calls upon his lurking armies and begins to pursue his own inscrutable goals. 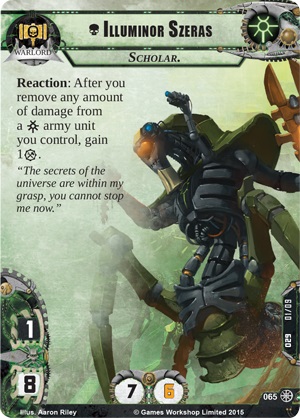 Fittingly, Illuminor Szeras’s ability rewards him for repairing his warriors: whenever you remove any amount of damage from one of your Necron army units, you may immediately gain a resource! You’ll also notice that these additional resources are balanced by Illuminor Szeras’s starting stats. Although he begins the game with the standard seven cards, he also starts with six resources—one less than a typical warlord. As the game goes on, however, you’ll quickly find that Illuminor Szeras’s ability translates into a significant economic advantage, especially with cards like Reanimating Warriors (Legions of Death, 20) and Reanimation Protocol (Legions of Death, 29). 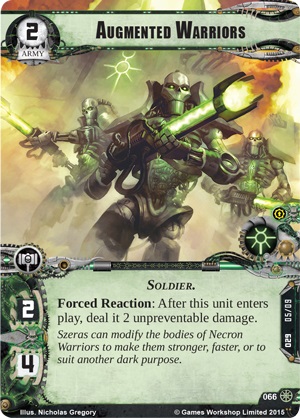 Of course, you can’t repair your units’ damage until they’ve taken damage, but many of the Necron armies sent to Illuminor Szeras aren’t yet operating at their peak potential. For instance, Szeras’s signature squad includes four copies of the Augmented Warriors (Searching for Truth, 66). This unit boasts a higher HP than usual for a unit of its cost, but when it enters play, you must immediately deal it two unpreventable damage. This may seem like a downside, but if you can easily repair it and gain a resource with Illuminor Szeras, this initial damage may be a small price to pay for such hardy units. 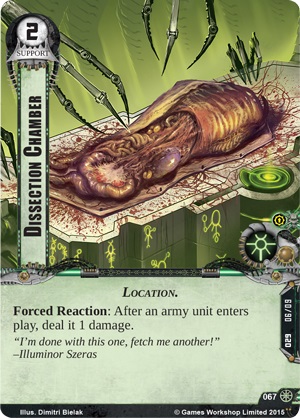 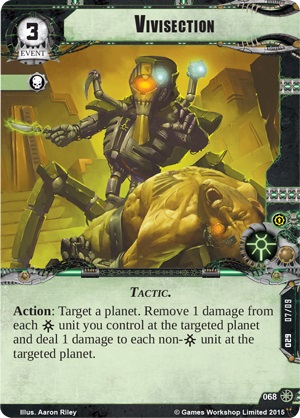 One way that you can repair your units and deal extra damage to your foes comes in Szeras’s signature event, Vivisection (Searching for Truth, 68). This event can be played at any time as an Action, and it allows you to choose any planet, remove one damage from each of your Necron units there, and deal one damage to all non-Necron units! Though this may damage a few of the units you’ve enslaved from other factions, chances are good that it will hurt your opponent far more, especially if you choose your planet wisely. 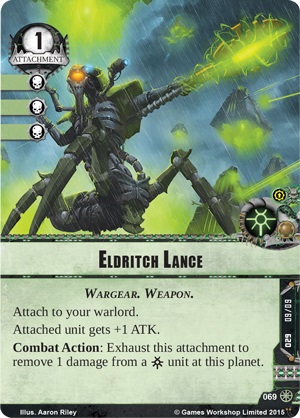 The signature squad concludes with a card that gives you the ability to heal your own units almost on demand: the Eldritch Lance(Searching for Truth, 69). This attachment can only be given to Illuminor Szeras, and it immediately boosts his ATK. Much more importantly, however, you can exhaust this attachment as a Combat Action to remove one damage from a Necron unit at the planet—healing your units and providing a constant flow of resources for combat tricks and additional units.

You can read the full preview from Fantasy Flight Games HERE. It’s got more gruesome details to read and more tips on how to play the Necrons in this War Pack.

While this Preview may focus on the New Necron cards in this War Pack, keep in mind everyone will have something useful to pick-up when this hits stores. Plus Necrons can do that whole “enslave” units thing…

Gather this ancient knowledge when Search For Truth hits shelves in the third quarter of 2016!