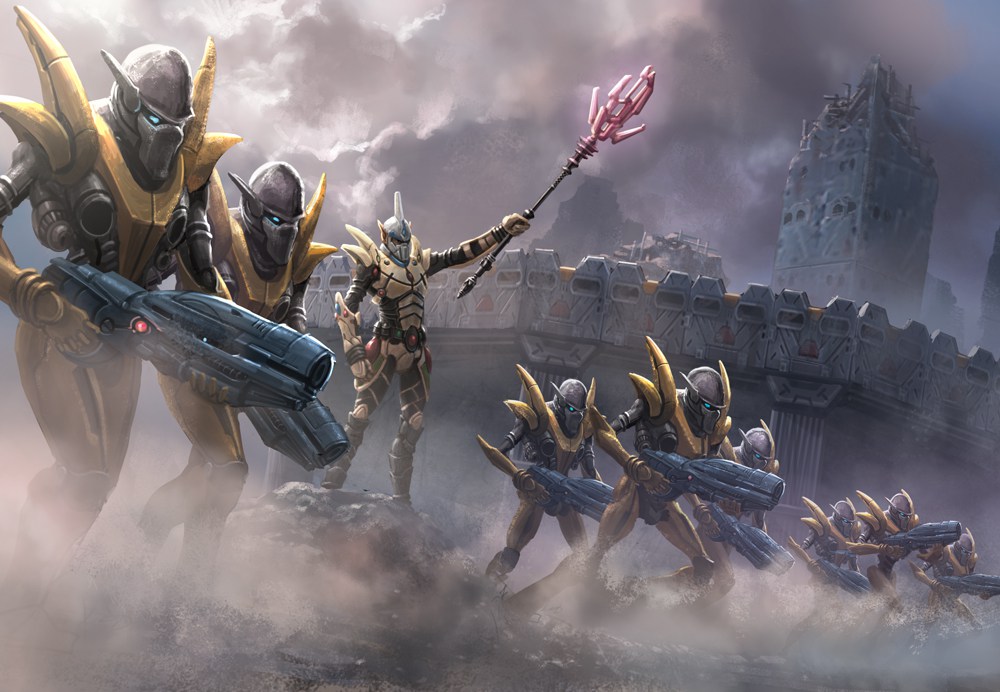 When balance is truly threatened the Asterians jump into action…

The Asterians are constantly hidden by shadows and misinformation. They stand apart from the rest of the galaxy, not interacting with other unless it suits their needs. Whilst most see them as aloof and uncaring, this couldn’t be further form the truth. The Asterians know the cost of life and strive to continuously maintain balance. They avoid warfare and the chaos that it brings, preferring to influence others into action, rather than intervene themselves. When balance is truly threatened, the Asterians employ their advanced and powerful technology to protect it. Cyphers and Marionettes, sophisticated artificial constructs, allow them to fight on the battlefield without physically risking harm to themselves. These warriors are piloted remotely from cloaked ships in orbit, far removed from the enemy. Wielding reality-bending weaponry, such as Noh Rifles, Plasma Vortexes and Fission Beamers, they can swiftly eliminate their targets before disappearing once more.

Some Asterians know the importance of experiencing combat first-hand. From the skilled Overseers to the feral Kalyshi, these individuals are seen as mavericks and risk-takers, albeit necessary ones. Humanity unleashes unspeakable terrors on the galaxy such as the Plague and Veer-Myn, while the Forge Fathers brutally strip worlds bare, uncaring of the consequences. In such a time, the Cypher Clades have been place on constant high alert. The Asterians know that if disaster is to be averted, then they must fight more than ever before in their history. If you are ready to fight to maintain the balance of all things, then the Asterian Faction Starter is a great place to start. Packed with Cyphers – the elite infantry of the Clades – as well as specialists, drones and a commander, this set contains everything you need to build an Asterian Strike Team or Campaign Army. The Cyphers are are on of the troop units for the Asterians. While they are vulnerable, they make up for it by being impossible to pin and being skilled at range. They can carry either Noh Rifles – a basic ranged weapon – or Charge Gloves – melee weapons capable of knocking opponents from their feet. This set includes five plastic Cyphers with Noh Rifles and four plastic Cyphers with charge Gloves, enough to base your force around either type, or a take a mixture. Cypher Specialists have stronger chassis, which allows them to bear heavier weaponry – such as the model with the Fission Beamer include in this set. When the Cyphers are outmatched, the Asterians can draw on more powerful units. The dedicated drone platforms mount devastating weaponry or advanced shielding technology in support of Cypher Strike Teams. These drones are considered to be entirely expendable compared to Cyphers and so are often committed in favour of ground troops. Another specialist within the Cypher Clades are the enigmatic Black Talons. Heavily specialised constructs equipped with Jump Packs, they are regularly deployed via aerial insertion. It takes an operator of unique skill and agility to master a Black Talon unit and such individuals are rare. The Asterian Faction Starter includes one plastic Black Talon with a Noh Rifle and two plastic Drones, who can be armed with either a Fission Beamer, Plasma Vortex or Shield Generator.

Seen as a role of selflessness and responsibility by the Clades, the Overseer is the leader of an Asterian Strike Team on the ground. Experience and combat doctrine combined with adrenaline and a first-hand perception of the field makes these commanders highly effective. It is a noble endeavour to risk one’s safety in the name of balance and the Overseer bears this burden with care. They will direct troops on the ground, making up for the inevitable detachment that Cypher operators experience from combat. Should an Overseer fall, the Strike Team will not be rendered useless, as many operators will hold the same rank as the Oversser. The loss of life and reduced effectiveness, however, is of serious concern. It is for this reason that Cyphers will protect their commanders, sometimes at the expense of all else. The Asterian Faction Starter includes one plastic Overseer to lead your Cyphers in the Deadzone.

The Asterian Faction Starter is available for pre-order now and contains all of these fantastic models! This set will be released in all good hobby stores at the end of June.

Mantic’s Asterian Faction has a unique look to it – what’s your take on the lithe aliens of Deadzone?