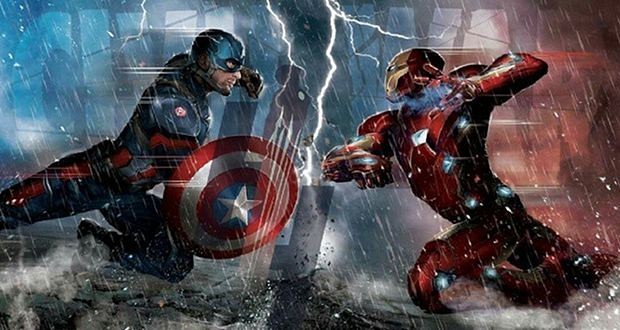 WizKids takes you into HEROCLIX: Civil War with a look at the the upcoming Captain America and Iron Man.

The Storyline OP begin this June so be sure to visit the WizKids Info Network to find stores hosting official Marvel HeroClix: Civil War Storyline OP events near you.

These Marvel HeroClix: Civil War Storyline OP events will be different from previous OP events as the set was designed and tailored to the characters and their factions . Each Civil War five-figure booster pack contains characters from the Pro-Registration, Anti-Registration, and Neutral factions.  Each character’s HeroClix base is colored to denote their faction:  Pro-Registration characters are red, Anti-Registration characters are blue, and Neutral characters have black bases.  For the Civil War Storyline OP set, the characters numbered #001 to #032 were designed in “pairs” of figures that have a similar point cost.  All the odd-numbered figures are part of Captain America’s team while the members of Iron Man’s team are even numbered. This character balance will come into play during your team drafting at the events. 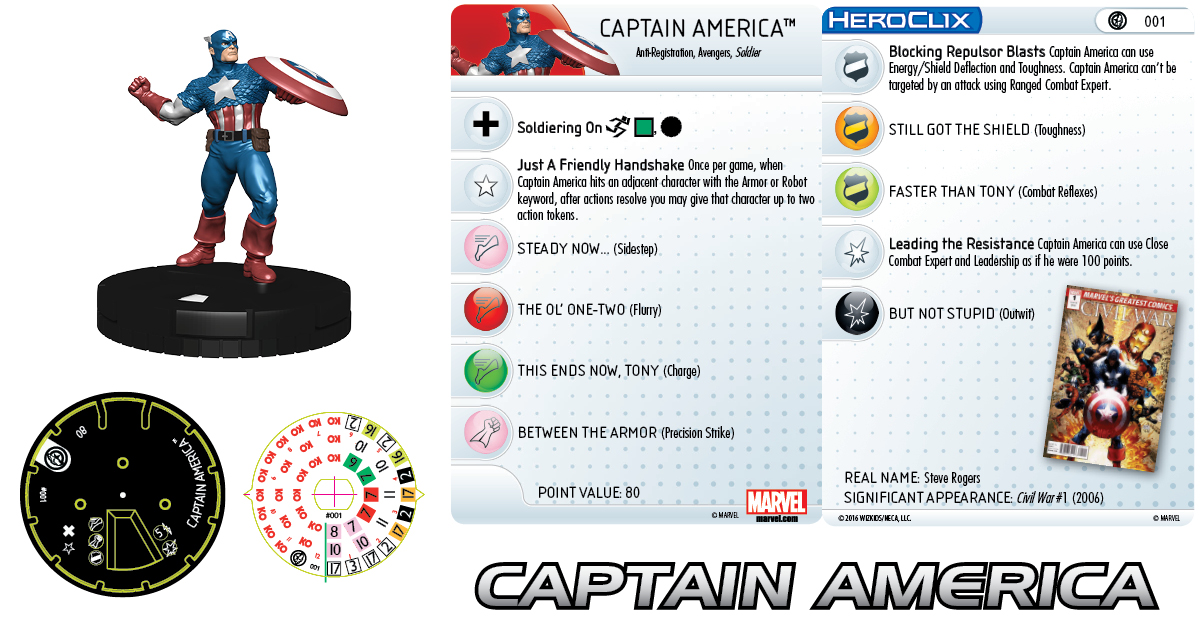 Here’s the basics on Captain America 001:

“Captain America comes in at 80 points and has the standard movement, attack, and damage symbols.  He also has the Indomitable defense symbol, which lets him act on consecutive turns without fear of taking pushing damage. Captain America’s Improved Movement ability called Soldiering On, lets him ignore hindering terrain and characters when he moves. As the leader of the Anti-Registration forces, Captain America has the Anti-Registration keyword along with Avengers and Soldier to aid you if you choose to include him on a keyword-themed team.

Moving on to traits and powers, Captain America hits the battlefield with a trait called Just A Friendly Handshake, which he can only use once per game. Just a Friendly Handshake allows Captain America to neutralize Armor or Robot characters, like Iron Man, for a turn by giving them two action tokens when he hits them with an attack while adjacent. Captain America also has special powers in his defense and damage slots, respectively.  In his defense slot is a special power called Blocking Repulsor Blasts, which lets Captain America use Energy Shield/Deflection and Toughness, while also preventing characters from attacking him with Ranged Combat Expert. Captain America’s Energy Shield/Deflection and immunity to Ranged Combat Expert from Blocking Repulsor Blasts help him get into battle even if he is being attacked at range. The special power in Captain America’s damage slot is called Leading the Resistance which lets him use Close Combat Expert and Leadership as if he were 100 points.“ 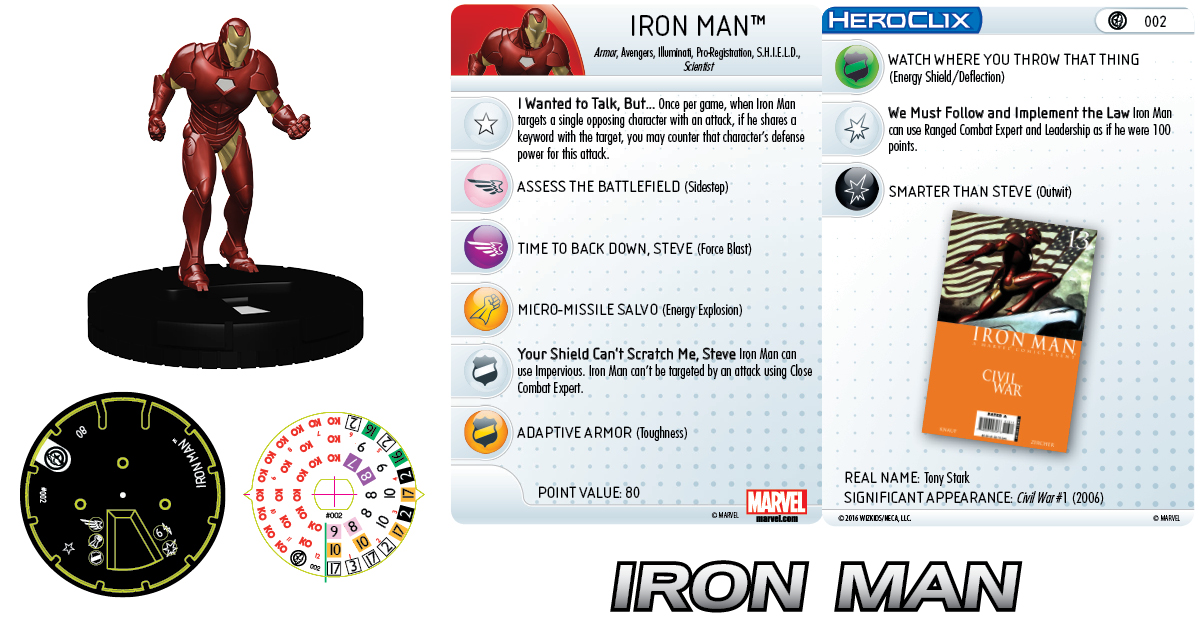 “Also coming in at 80 points but with the ability to shoot a single target six squares away, Iron Man has the standard attack and damage symbols and the Indomitable defense symbol.  He also has the wing speed symbol, which lets him fly and carry teammates.  As the head of the Pro-Registration faction, Iron Man has the Pro-Registration keyword along with Armor, Avengers, Illuminati, S.H.I.E.L.D., and Scientist.

As for traits and powers, Iron Man enters play with a trait called I Wanted to Talk, But… which can be used once per game when Iron Man targets a single opposing character with an attack.  If Iron Man shares a keyword with the target, he may counter that character’s defense power for the attack. With a lot of Avengers keyword characters involved in the Marvel HeroClix: Civil War Storyline OP, there are a lot of targets for this ability. Like Captain America, Iron Man has special powers in his defense and damage slots.  Iron Man’s defensive special power, Your Shield Can’t Scratch Me, Steve, lets him use Impervious. Additionally, Iron Man can’t be targeted by an attack using Close Combat Expert if any characters get too close. Iron Man’s damage special power We Must Follow and Implement the Law, allows him to use Ranged Combat Expert and Leadership as if he were 100 points.“