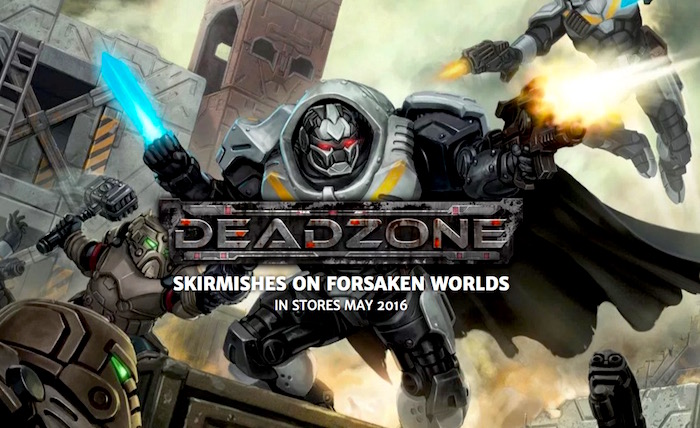 Mantic’s close combat skirmish game is easy to pick up… check it out!

Deadzone is a simple and intuitive ruleset for playing game in a claustrophobic urban battlezone. It’s slick and can be picked up quickly so that you can be playing with your friends in no time.

In this blog we show you a video of a game between Dave and Sunny, who battled against each other with the factions found in the new Deadzone 2nd Edition Starter Set. We also provide an overview of the rules below.

Movement is based on cubes. Deadzone is played on a grid of 3”x3” squares and the scenery is built to match these. These square also extend upwards to form cubes. Models move from cube to cube as in a boardgame and each model‘s movement speed is expressed in cubes. A model can be placed anywhere inside a cube, but there is a limit to how many models of different sizes can fit into a cube. Usually this is four Infantry models, which decreases as the models increase in size. Models can move up or down levels if they are able to climb, or have a jetpack.

Cover is crucial in games of Deadzone. If you are caught out of cover, then you are dead. If you are caught out of cover by a sniper, then you are very, very dead. As a result, games tend to be very brutal with models being killed on a regular basis. You’ll almost always play a claustrophobic, close-run game as you and your opponent dive between areas of cover and try to capture objectives, or fire shots off. Some models can only kill up close – sneaking out of harms way until the very last moment.

Weapons assume that your target is almost always in cover – so you’ll only get bonuses for a clear shot, instead of a penalty for the opposite. Each faction has a range of weapons available to them, form basic rifles and pistols, to more devastating burst lasers or fission beamers. As some warriors are heavily armoured, there are heavy weapons that can ignore the armour. There are also suppression weapons to pin your opponent down, or saturation weapons that cover a whole cube, rather than targeting one individual alone. Shooting, Combat and some other special rules are based around the all mighty dice test. For the vast majority of actions, you roll three eight sided dice and compare them to a result. For every dice that equals or beats that result, you score one success. Rolls of eight ‘explode’ – you get to roll one more dice each time this happens. Modifiers may affect the number of dice you rolls, but never affect the result you need to roll – this stays the same.

The special rules in the game have all been rewritten to be more streamlined and not slow the game. These can have varying effects, from setting a model on fire, to throwing them off a building. All of these work with the core mechanics, not adding any unnecessary complication and using the same basic principles.

Each Strike Team has access to a number of Command dice. These are rolled at the beginning of the turn. Each of the symbols on their six faces grants you a bonus action or dice that you may use on your models. These can give you that extra boost at just the right moment to survive longer or fight harder. Author: Adam Harrison
Writer, Editor, Texas Native, and Austinite for 15+ years, Adam covers all things Tabletop Gaming. Which includes Warhammer 40,000, Age of Sigmar, D&D, Board Games and everything else that involves dice, boards, cards and a table. A hobbyist, player, and collector of miniatures and games, Adam's current obsession are his Death Armies for Age of Sigmar, his Blood Angels and Tyranids for 40k, and his ever growing Arkham Horror: The Card Game Collection.
Advertisement
Deadzone Mantic Rules
Advertisement