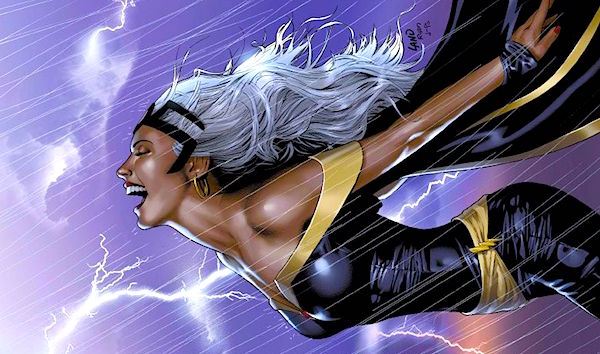 WizKids points you to a glimpse of some strong female characters from the Uncanny X-Men expansion – just released!

Today we take a look at the 4 X-Women that just arrived HeroClix in the Marvel HeroClix: Uncanny X-Men series.   Take a look. 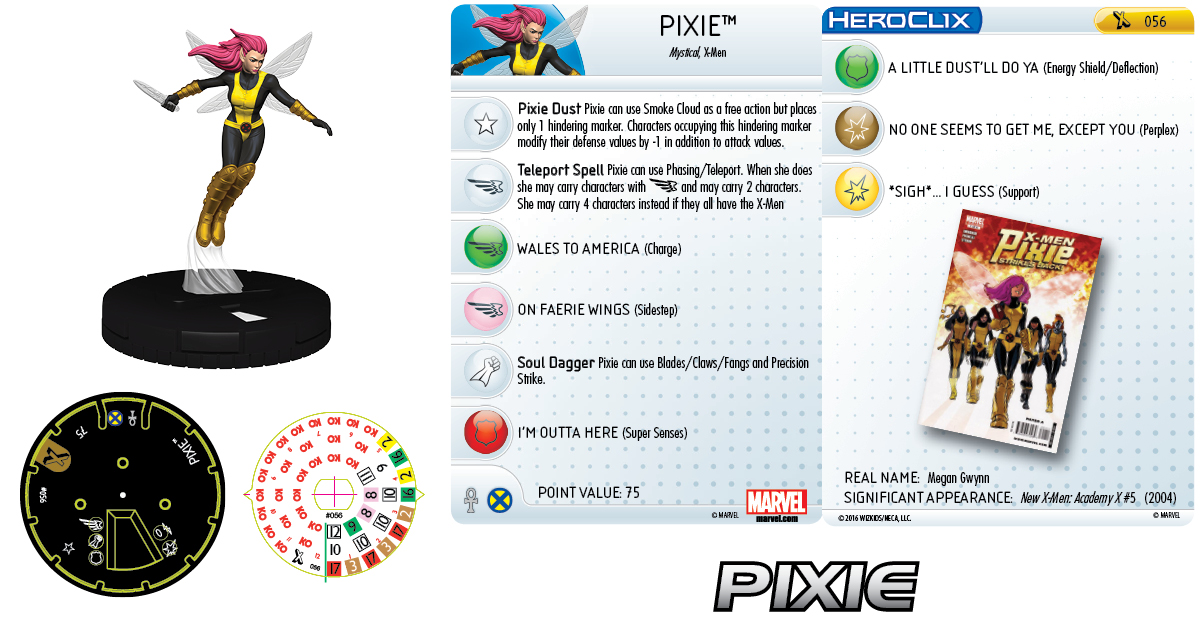 A 75-point piece, Pixie features both the ­–Mystics and X-Men team abilities. She also features a trait called Pixie Dust, which allows her to use Smoke Cloud as a free action, however, she’s only allowed to place 1 Hindering Terrain Marker. Characters occupying that Hindering Marker modify their defense values by -1, in addition to attack values. Pixie also brings two special powers – the first appears on her first and last click, called TeleportSpell. This ability allows Pixie to use Phasing/Teleport. When she does, she can carry up to 2 characters with the Wing movement symbol; instead, she may carry 4 characters if they all have the X-Men keyword. On the middle three clicks of her dial, on attack, lies the special power Soul Dagger. This power states that Pixie can use Blades/Claws/Fangs and Precision Strike. 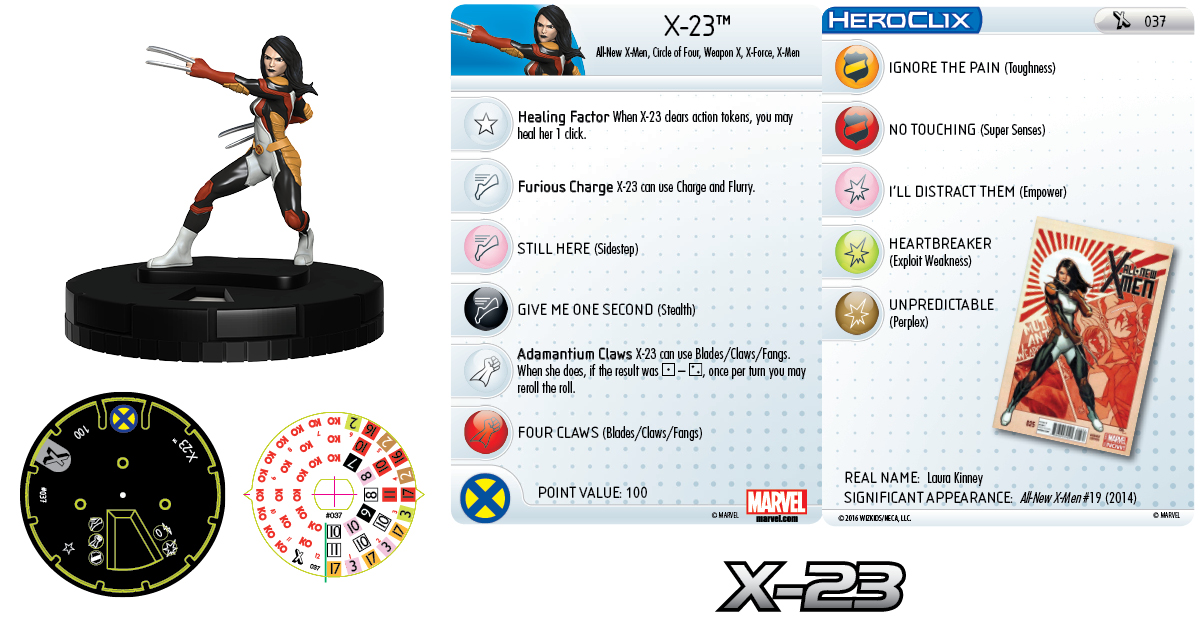 X-23, who – as a clone of Wolverine – specializes in close combat. Laura starts with a trait called Healing Factor, which states that when X-23 clears her action tokens, you may heal her of 1 click of damage. Now, X-23 is Indomitable – so you’re left in a bit of a catch-22 here – do you push her to get an extra attack, or clear her to give her more health? She also brings two special attacks to the fight – first, on her 1st and 4th clicks of movement, is Furious Charge, which states that X-23 can use Charge and Flurry. Her second special power is on her first 3 clicks of attack, and is called Adamantium Claws. This power states that X-23 can use Blades/Claws/Fangs, and when she does, if the result is a 1-2, you may reroll that result once per turn. 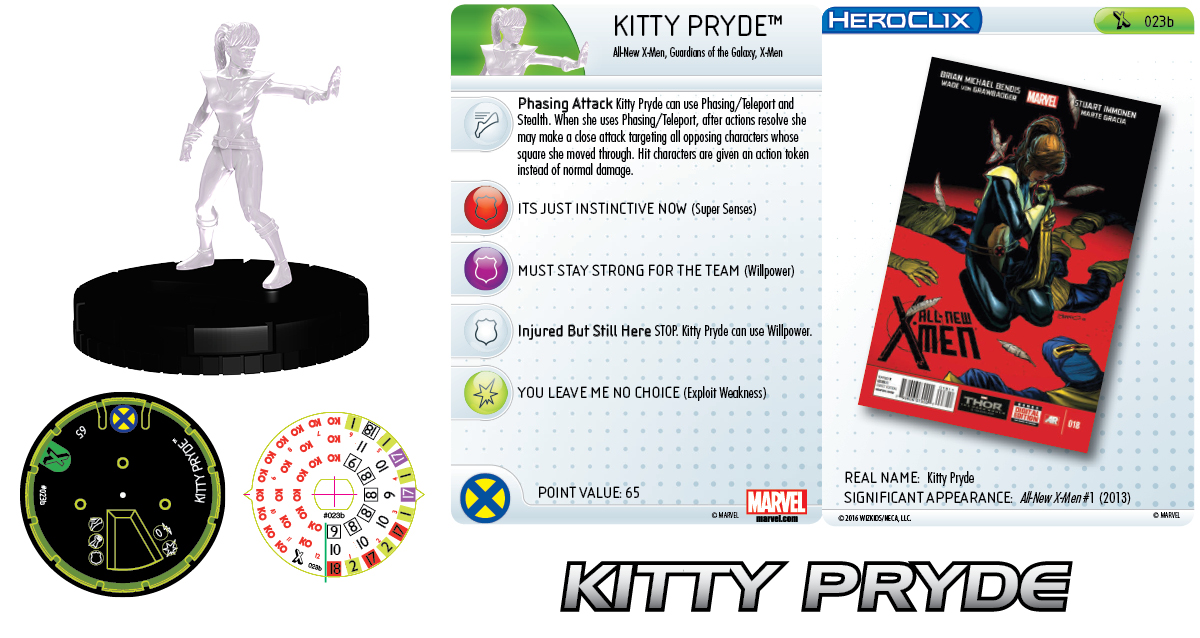 Here’s the basics on Kitty Pryde 023b:

This version of Kitty is from her time with the Guardians of the Galaxy, but she was still a loyal member of the X-Men! Across her entire 6-click dial, Kitty features a special movement power called Phasing Attack, which states that Kitty Pryde can use both Phasing/Teleport and Stealth. Additionally, when she uses Phasing/Teleport, after actions resolve, she may make a close attack targeting all characters whose square she moved through – and, hit characters are given an action token instead of normal damage! Kitty Pryde also has a STOP click on her defense called Injured but Still Here, which states that in addition to the dial stopping, Kitty Pryde can also use Willpower. 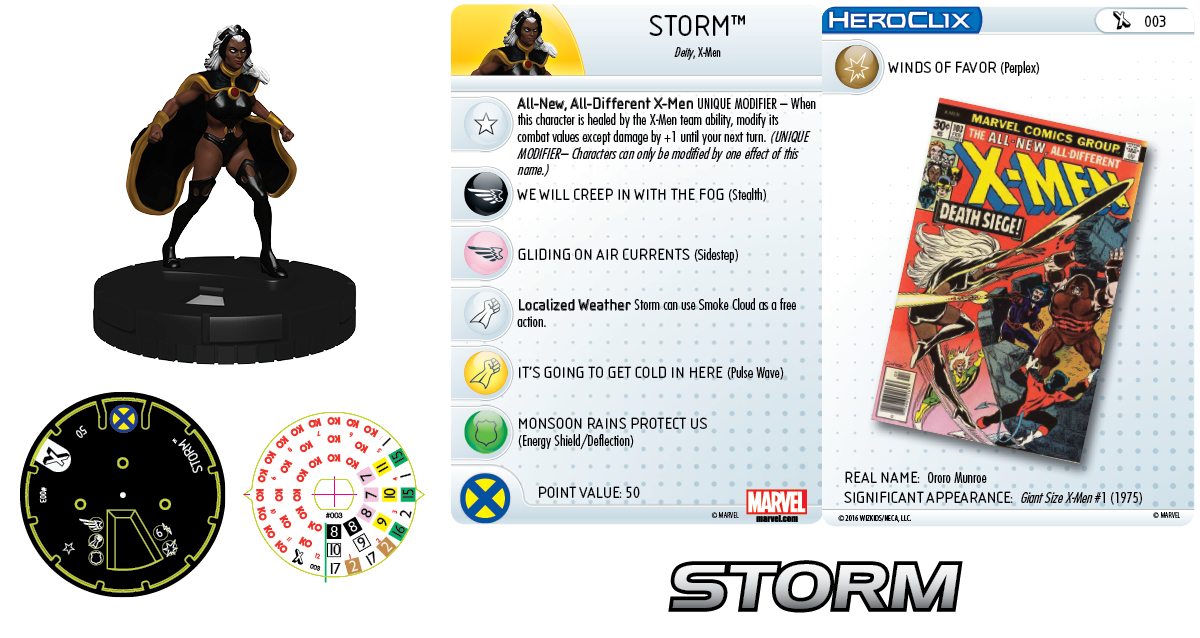 Storm—this common version of the weather goddess brings a lot to the table for a mere 50 points. First is her trait, All-New, All-Different X-Men, which is a unique modifier that states that when Storm is healed by the X-Men team ability, you will also modify her combat values by +1 until your next turn. She also has a special power on her first two clicks of life called Localized Weather, which allows Stormto use Smoke Cloud as a free action – this combos incredibly well with her Flight ability, as well as her own natural Stealth.

The Marvel Heroclix:Uncanny X-men is out on shelves!

Have at it HEROCLIX fans.