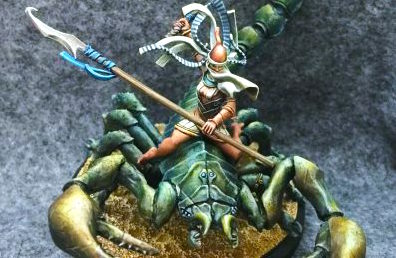 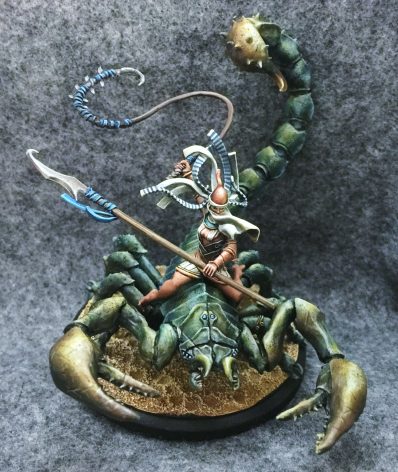 Today I’ll take you step by step over how I painted Sereqet for Arena Rex.

Sereqet is the Titan for the Morituri faction. 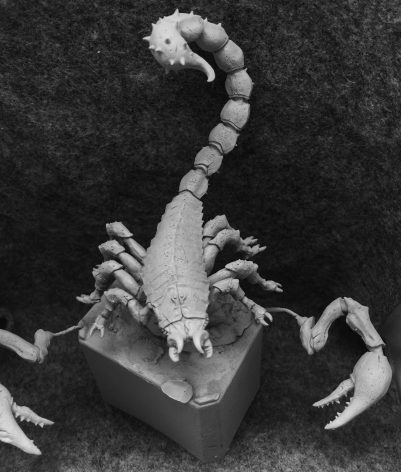 I started off by pinning him to a “handle”: just a nice hunk of plastic that I could hold onto easily. The pin was just glued right into the bottom of the model and the little hole I drilled there for the pin is impossible to see now that the model has been based. The claws were not attached yet because they sling back over the legs and make them difficult to reach. They got their own pins as you can see. 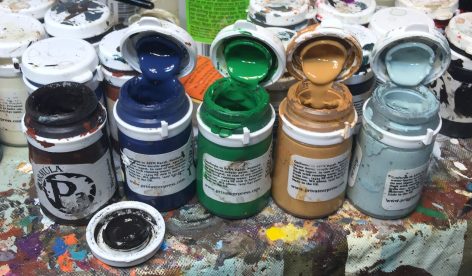 I wanted to try something a little weird with Sereqet. I didn’t think that the brown and tan or jet black colors you usually associate with scorpions would make for the most engaging paint job. I also had always wanted to try to paint something on kind of an iridescent beetle scheme. It seemed like this could get some cool results on this scorpion. I started with a pretty vibrant array of colors with the plan to tone it down a little with washes and glazes later down the road. 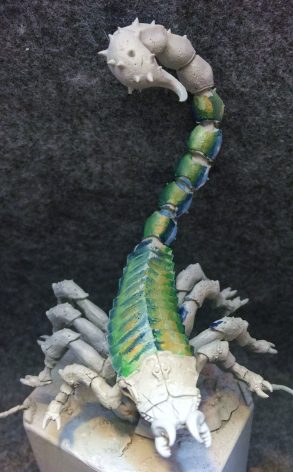 Here we are a little way in. I attacked it pretty quickly, wet blending everything together to get some nice transitions going. The light blue (Underbelly Blue) is the brightest highlight at this point, blended down into the orange/tan (Rucksack Tan) then into the green (Iosan Green) finishing off with the dark blue (Exile Blue). Note the reflected “light” on the base of the tail to help drive home that iridescent look. 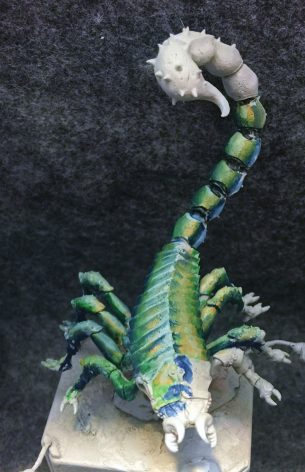 I begin painting my way out in to the legs and face. 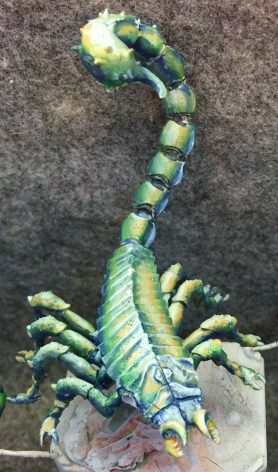 Then all the way up into the tail, and out onto the jaws. 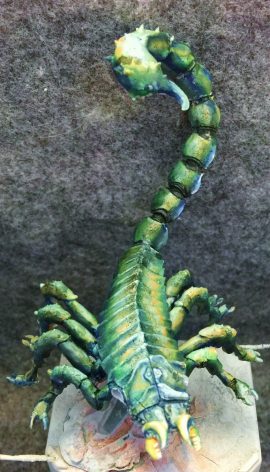 This is where I began to tone the color down some. Iridescent is one thing but I didn’t want people calling him the rainbow scorpion. I use a wash of Agrax Earthshade around the edges and anywhere I think it needs to be darkened/desaturated. 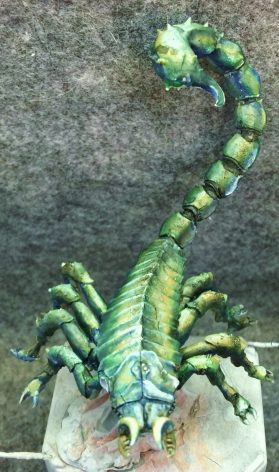 Next I begin adding a bit of blue and green ink into the Agrax and continue using the mix to darken the edges. 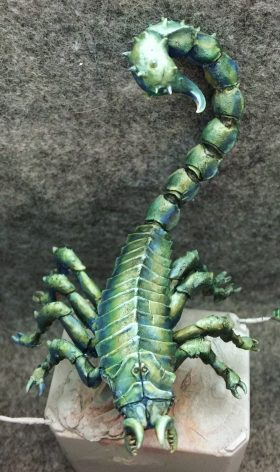 I keep adding a little more of that ink mix until I get him about here. I also added a lot of definition to the highlights, most prominently down the middle of the back and along the edges of the armor plates. 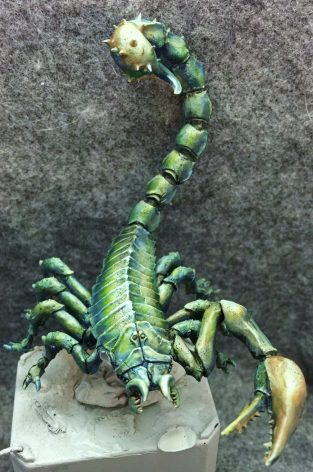 I felt the legs were far enough along that I glued a claw back on. This was around the time that I decided to give the claws and tail tip more of an orange tint to help give the model a bit more variation. I used a lot of Bloodstone for this look, along with some Yellow Ink. I also added some yellow ink in a few places around the rest of the creature. 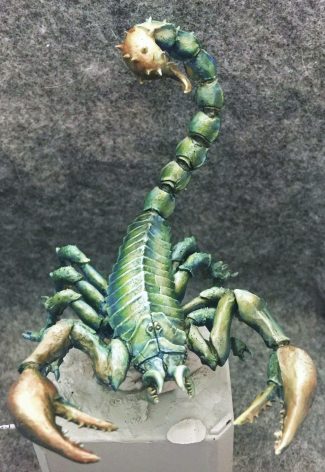 I glue the other claw on and pump up the orange even more on the tail. 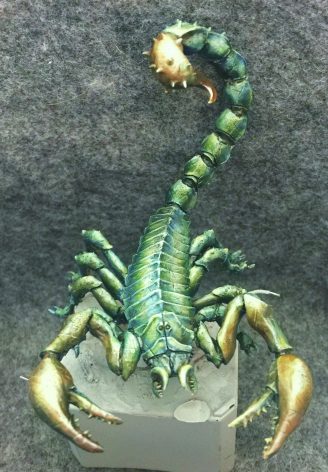 Still not satisfied I darken the body even more. I add some shading closer to the middle of the back. This narrows the bands of highlight down the armor plates. Making them more stark should increase their contrast and better convey the illusion of iridescence. I also added some scratches and dings on the claws and some other areas. This is a giant fighting scorpion after all. 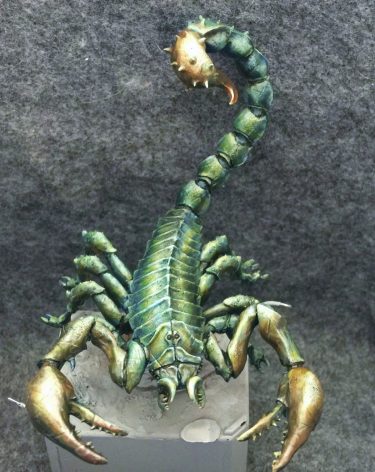 But… its still not as dark as I want it. In this last stretch I actually add some pure black in with the green and blue ink and apply it as a very thin glaze around the edges and in a few recesses. On the claws I mix the black with Agrax and Bloodstone for a warmer toned glaze. I leave the starkest highlights untouched. 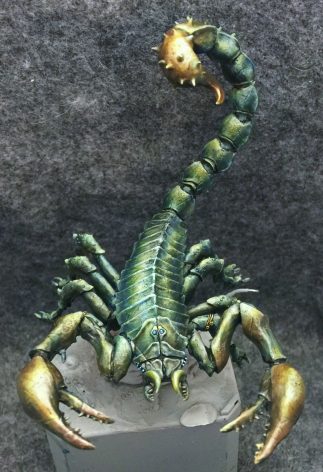 Once I finally have all the shading done to my satisfaction, I paint the eyes a nice spooky pale blue, and paint that bracelet on his leg gold. 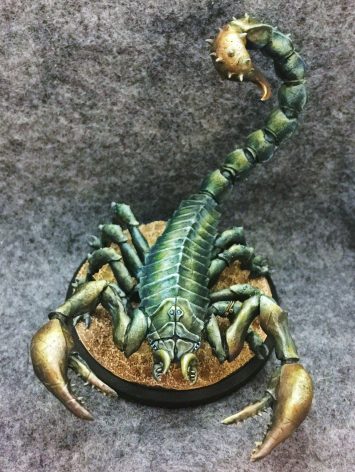 Then I just have to glue him to the base. 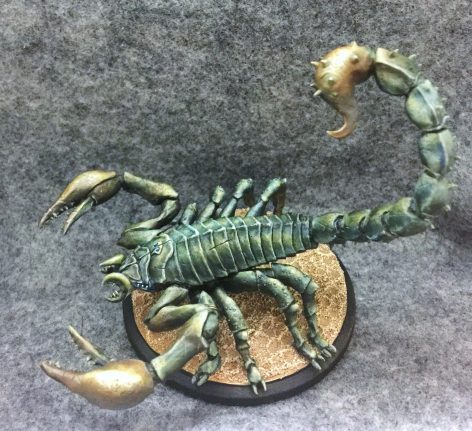 Here are some more angles. 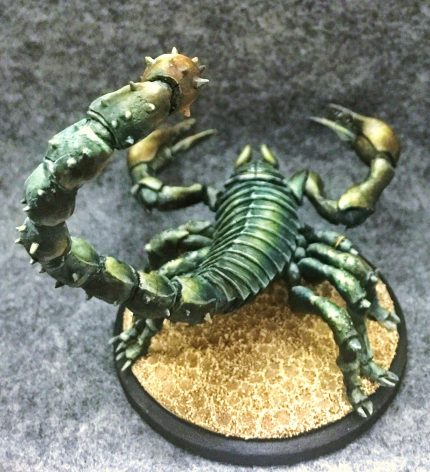 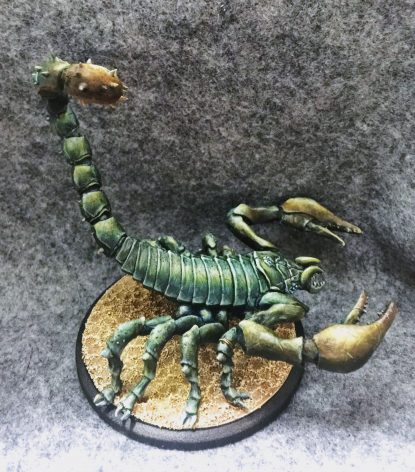 ~Hope you enjoyed the article. This will be it for Sereqet as I did not take any WiPs of Zahra, his rider. I plan to have an article for a different Morituri model, Khepros, at a later time.