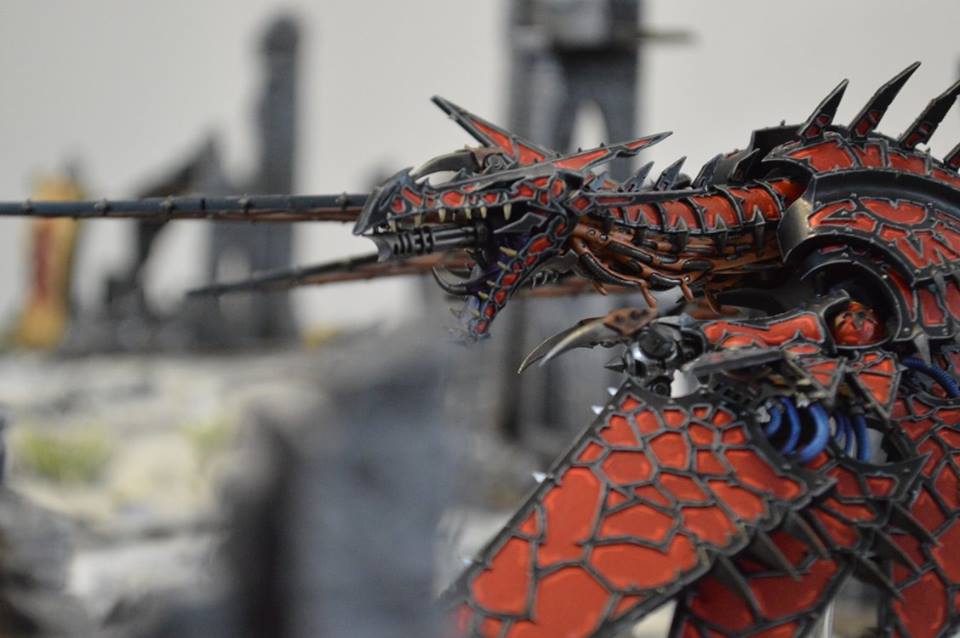 Casualty read-outs and status reports continued to scroll through Haesulth’s retinal display. Defeat always tasted bitter but to be forced to withdraw from his own fortress… for a son of Perturabo it was unbearable. Already those Khorne-worshipping dogs were defiling his demesne with their blood daubed banners, their voices thundering with fanatical praise to their brutal God. No. Defeat tasted bitter, but today it would not be Haesulth the Ironbound that would taste it. No sooner had the faintest outline of a plan began to form in his mind than he quickly began bellowing orders via the vox. His forces had been depleted but not destroyed, the opportunity for vengeance would be the beacon, the rallying cry to arrest their flight and reform to face their foes once more.

Haesulth’s words boomed and crackled as his squads began forming an ever growing battle line, vehicles gunning their engines in eagerness to redress their earlier drubbing. To launch a counter attack against an enemy that outnumbered him and that had the advantage of fortifications was, Haesulth knew, suicidal. But, his foes were Khorne’s favoured, defence was anathema to them especially when they were buoyed by their earlier victory. All the Iron Warriors had to do was to form a line of battle and make the semblance of a counter attack to draw the undisciplined mob out into the open. Already, he could see the first crimson armoured warriors begin to appear at the cities edge. They were coming. The Iron Warriors would be ready for them, eager to pay back the blood spilt.. with interest.

Points: 1750pts
Deployment: Hammer & Anvil
Mission: Purge the Alien
Special Scenario: For every enemy unit on the opposing players half of the table (other side of the fence) at the end of the game the player receives 1vp.

Will you look at this beauty of a table!!! After two weeks of hard work selecting the chosen 32 players out of 61 applications from all over the globe for the exclusive No Retreat 3 tournament in October, (trust me it was hard work) we are now back to what we do best! Battle Reports… Boom! …..and here you have it, an amazing setup by the team making good use of these custom made (by us) Khorne banners that fit perfectly with the ruins. This, combined with the amazing trees by Studiolevel makes it a perfect board for a fight to the death between our studios Iron Warriors and Chris’s KDK. Hold on to your seats guys, this is going to be an awesome ride!!!

We are ready to start…. We roll for night fighting and on a 4+ there will be darkness on turn one!

With Chris and his Daemonkin winning the roll-off to see who would get to choose whether to start or not, he decides to go first and starts to deploy his amazing KDK army in his deployment zone.

With not much space in his deployment line due to the obstruction of ruins and other units, Chris deploys some if his units further back the line just behind the hounds.

Here is a view from the other side of Chris’s deployment. Such a cool shot and so very Khorne! You can really feel the Khornate army rushing forward into the enemy! Amazing. Cant wait for this to kick off!

Here come the Iron Warriors….. Steven starts to deploy, interestingly he is also very close to the deployment line….. He starts by deploying three of his rhinos on one flank carrying three squads of marines. These will pack a punch when they all disembark at the same time. Love the paint jobs on these Iron Warrior tanks.

The badass Vindicator deploys in the centre of the table giving some cover to the Lord and his Sorcerer who are now a unit together… Hmmm how will this work out?

Here is Steven’s final deployment and you can see that he has also chosen to deploy as close to the enemy as possible… I guess he is going for a counter attack. This will be interesting. Both Shooty helbrutes stay a bit further back giving some much needed covering fire.

Turn 1 (Khorne Daemonkin) With Steven and his Iron Warriors failing to steal initiative on the roll of a 5, Chris starts to move his forces up the Battlefield. Epic! Bloodthirster already scoping possible targets for his colossal axe!

Turn 1 (Khorne Daemonkin) With most the KDK units rushing up the battlefield its time for some shooting….I actually think its the only thing that can shoot……. The Soul grinders phlegm bombardment fires at the Rhinos catching all three under the blast (Big mistake by Steven) Luckily Chris’s scatter dice don’t hit and the blast scatters onto only one of the rhinos and even better for steven it fails to even glance… so much for ordnance…

Turn 1 (Khorne Daemonkin) With nothing else in range to shoot he opts to run with the rest of his units. Who let the dogs out?!!

Turn 1 (Khorne Daemonkin) Another great picture here capturing the full force of the Daemonkin charging forward into the enemy! As you can see the bikes at the bottom have sped off into the first fence that divides both armies whilst top hound squad has already began crossing it! I’m so excited!!!!! WAAAGH…

Turn 1 (Khorne Daemonkin) The Bloodletters also run out from inside the Ruin creating a great threat to Steven’s Marines. If these creatures get into combat with those Iron Warrior marines they will prove deadly. Loving those swords too!

Turn 1 (Iron Warriors) Straight on the counterattack and trying to hit as hard as possible from the start, Steven Disembarks two of his units from the first two rhinos moving them up towards the red wave. Iron Within, Iron Without!

Turn 1 (Iron Warriors) On the other flank the two other squads also disembark from their rhinos that’s 4/5 units now disembarked and ready to unleash hell on the red enemy line!!! Chris take your hands out of your pockets! you should be excited like me!

Turn 1 (Iron Warriors) This is how Steven’s forces look like after the movement phase. The Sorcerer and Lord making good use of the Demolisher which has moved forward using it as cover whilst the Helbrutes stay back and target their first enemy unit. Looks so cool how the Daemonkin army is creeping out of those ruins in the distance. what a sight that is! Those banners adding to the awesomesauce!

Turn 1 (Iron Warriors) Steven gives his Sorcerer Warp Speed in the Psychic phase and then moves on to the shooting phase straight after. The first Marines, which he thought were in melta range to target the soulgrinder, was not so Steven instead targeted the Blood Letters who had just ran out of the building. Some great shooting here and with the support of the 3 rhinos behind firing their combi bolters they manages to remove 8 bloodletters from play.

Turn 1 (Iron Warriors) The vindicator fires its deadly blast targeting the last hound and luckily also catches the Maulerfied (Clever Steve) it lands a direct hit and manages to kill the closest 2 hounds but a good cover save from the fence and night fighting see’s Chris pass his 4+ on the maulerfiend.

Turn 1 (Iron Warriors) These two marine squads fire all they have at the approaching Blood Thirster, amazingly removing 2 wounds off it after Chris gets some horrible rolls! The two rhinos behind them and their havoc launchers fire at the Hounds infront removing one from play and sending it back to the warp. “From iron cometh strength! From strength cometh will! From will cometh faith! From faith cometh honour! From honour cometh IRON!”

Turn 1 (Iron Warriors) Chris places his wound counter on the Blood Thirster…. 2 wounds down and already not looking great for Daemonkin!

Turn 1 (Iron Warriors) Finally the two helbrutes fire at the soulgrinder manging to hit it twice with their lascannons but some great cover saves from chris again only sees one go through, which only managed to glance its Daemonic hull!

Turn 2 (Khorne Daemonkin) Here come the Drakes!!!! Using the warlord trait that allows Chris to reroll his reserves, all three Hell Turkeys…. sorry Heldrakes come in creating instant havoc for Steven and his Iron Warriors. With so many marines outside of their vehicles this is surely gonna hurt!