40K Conquest: Welcome to the Jungle

The Jungles of Nectavus, the newest War Pack for Warhammer 40K Conquest, hits stores this week! 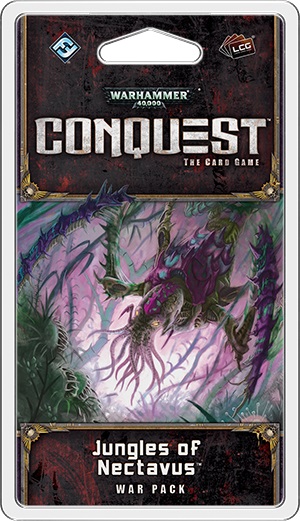 As the first War Pack of the Death World cycle, Jungles of Nectavus offers an array of new cards, including plenty of units, attachments, and events that use the new Deep Strike keyword to arrive on the battlefield unnoticed. Other units enhance the combat prowess and staying power of your Elite units, the Tyranids gain a new synapse unit, and the Necrons receive their first influx of cards after the Legions of Death deluxe expansion. Even though it doesn’t include a new warlord, Jungles of Nectavus promises to revolutionize your games with new cards for every faction. 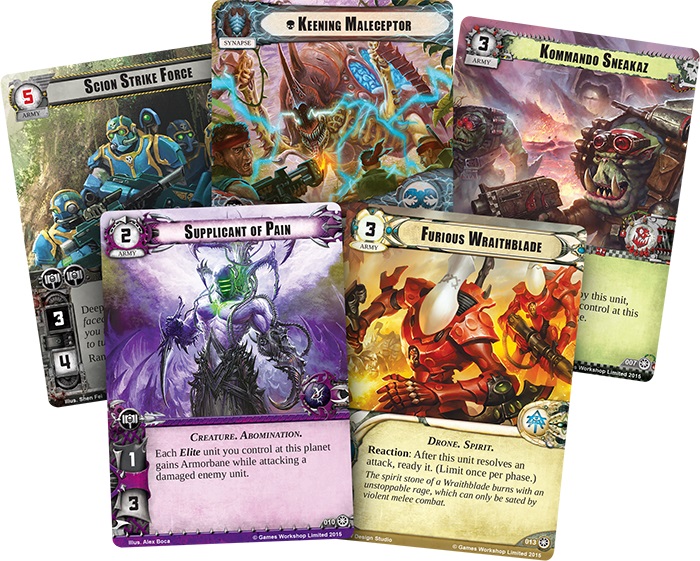 Deep Strike, the new keyword that’s introduced in this cycle, allows you to play cards facedown in reserve at the planets of the Traxis sector. Then, before a battle begins at that planet, you can pay the card’s Deep Strike value to bring it into play, potentially swinging the tide of battle in your favor. It’s obvious that the prime value of many Deep Strike cards is linked to the surprise of revealing them. After all, if your opponent knows what’s coming, he can plan and prepare. That’s where the Seer Adept (Jungles of Nectavus, 12) comes into play for the Eldar and their allied factions. 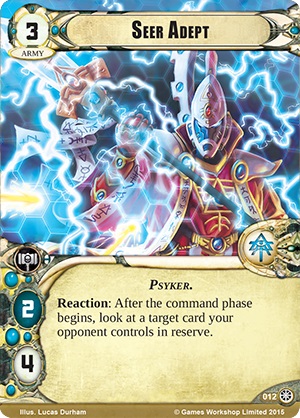 In some cases, the best way to adapt to your opponent’s plans may be an overwhelming offensive, and fittingly, the two other Eldar cards in this War Pack greatly boost your attack prowess. The first card is Furious Wraithblade (Jungles of Nectavus, 13), an army with solid ATK and HP that readies immediately after making an attack! If you’re able to get off two attacks per round with the Furious Wraithblade, you’ll quickly slice through even the sturdiest defense. As a final touch, this unit also bears the Drone and Spirit traits—two useful traits for your army units to have. 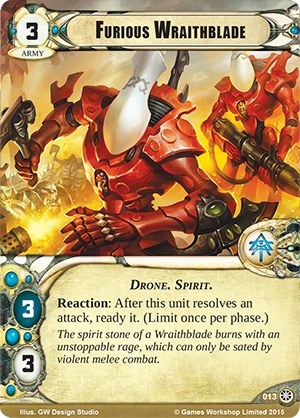 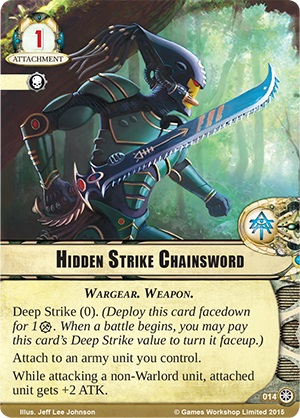 If you’d like to read more about this set you can check out the full article from Fantasy Flight Games here. We also did a run down on some of the other cards in a previous preview post so be sure to check that out as well.

What’s really exciting about this set is the introduction of the new Deep Strike mechanic. In case you missed it, here’s a quick run down from FFG on how Deepstrike works:

“Deep Strike, the new keyword that’s introduced in this cycle, allows you to play cards facedown in reserve at the planets of the Traxis sector. Then, before a battle begins at that planet, you can pay the card’s Deep Strike value to bring it into play, potentially swinging the tide of battle in your favor.”

This ability to play cards on a planet and then pay to flip them when you’re ready to strike can be invaluable in a card game like 40K Conquest. And from the looks of things we’re going to see more of that from every faction in this new Death World Cycle. As always, this is an LCG or Living Card Game – that means each pack of the same name comes with the exact same cards so you know exactly what you’re getting (ie, no more disappointing rare cards to bemoan).

Jungles of Nectavus is in stores now – get ready for battle on a harsh new planet in Warhammer 40,000: Conquest!

If it bleeds, we can kill it…

Author: Adam Harrison
Writer, Editor, Texas Native, and Austinite for 15+ years, Adam covers all things Tabletop Gaming. Which includes Warhammer 40,000, Age of Sigmar, D&D, Board Games and everything else that involves dice, boards, cards and a table. A hobbyist, player, and collector of miniatures and games, Adam's current obsession are his Death Armies for Age of Sigmar, his Blood Angels and Tyranids for 40k, and his ever growing Arkham Horror: The Card Game Collection.
Advertisement
Card Games FFG - Fantasy Flight Games LCGs Tabletop News Warhammer 40k
Advertisement