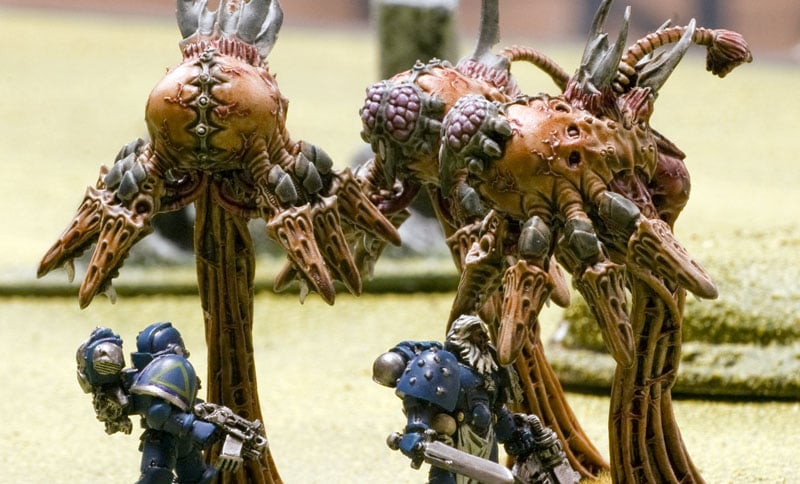 Today Loremasters we examine the destroyers of life from beyond the veil, the ancient horror of the Enslavers.

The Enslavers, also known as Psyrens, Krell, dominators or puppeteers, are entities that are native to the Warp.

The history of the Enslavers is traced to the War in Heaven that was fought millions of years ago between the C’tan-led Necrons and the Old Ones, along with their successor races. In this era, the Old Ones had engineered a number of species with a strong connection to the Warp to serve as warrior races of Psykers against their enemy. The growing pains of these Young Races disturbed the peaceful Empyrean, turning it into a hellish environment filled with now-deadly Warp predators. Eventually, they broke the boundaries between dimensions and amongst the most proficient of these Warp-spawned creatures were the Enslavers. Using their mental powers, they dominated the minds of the Young Races and used the transmutated bodies of Psykers as portals to bring more of their kin to the material universe. The arrival of these Warp entities brought the final downfall of the Old Ones’ reign as their own creations fell victim to the command of the Enslavers. Breaching the Immaterium in epidemic numbers, the Enslavers would take what was left of the galaxy whilst the C’tan retreated to ride out the storm. Thus, the galaxy became a wasteland until the psyker swarm died off and allowed the galaxy to emerge with new life.

The Necron Overlord Trazyn the Infinite who is a keeper of rare artefacts is known to hold the ossified husk of an Enslaver amongst his relics. By the Age of the Imperium, the origins of these creatures are largely unknown to Mankind and remain a complete mystery to them. They were known by a variety of other names in different parts of the galaxy such as Krell, Psyrens, dominators and puppeteers. Descriptions of these creatures are rare and fragmentary but data has been gathered on their appearance as well as feeding habits. The Ordo Malleus and Ordo Xenos have a dual interest in Enslavers for their warp origins and their existence as an alien species. Numerous Enslavers were encountered by Inquisition forces in the Scintilla System in 260.993.M41 and subsequently destroyed. Further evidence reveals that the creatures were embedded within a rogue-psyker smuggling ring headed by criminal organizations, most notably the Faxlignae. The Enslavers are believed to be the potential threat related to the Dark Pattern that is unfolding within the Jericho Reach. 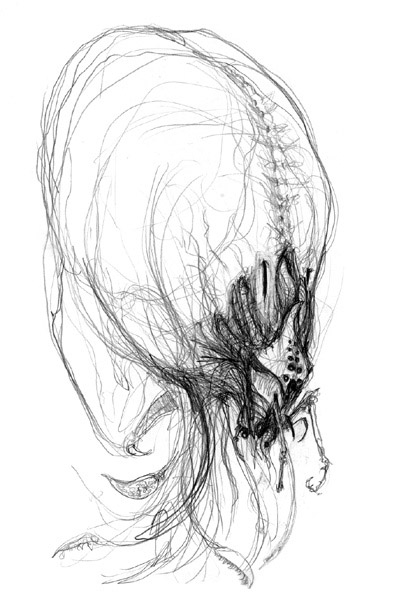 These other-dimensional beings have physical forms that are unlike any other known lifeform. They seem to possess physical bodies but appear to exist in Warp space for at least part of their life cycle and are known to pose a terrible threat to all living creatures when in the material realm. In shape, they appear as barrel-shaped or basic spheroids that measured approximately 2 meters in height and had a tough leathery skin. They are able to change their skin tone at will though are typically leathery brown. A single large sensory organ coloured either red, pink or orange sometimes referred to as an eye sits at the very top of the body though its actual function is unknown. Around the upper portion of the body is a cluster of pale or white or pinkish tentacles that range between 8 to 12 in number that are all one and a half meter long. Typically, two of these are longer than the others and end in suckered pads. The tentacles serve as the primary sensory as well as manipulative organs for the Enslaver. Though they lack any legs, they do move about their environment by floating and sometimes use their tentacles to aid them when they wish to move precisely or fast. This method allows them to move quite rapidly and allows them to change direction or speed in a manner comparable to Humans or other more orthodox creatures. An Enslaver can float up to 3 meters high but are unable to actually fly though they are able to climb.

They have the ability to transcend normal space allowing them to easily traverse the galaxy and perhaps beyond. Enslavers are able to travel through warp space by using the psychic vibrations of other creatures. The name Mankind has given them stems from the fact that they are able to mentally enslave other creatures to their will. Through mental control, they are able to take over the minds of other races with a single Enslaver able to dominate the minds of up to 10 creatures. The victims of this mental control retain all their abilities, knowledge and physical attributes though all of these are under the command of the Enslaver. Victims of the Enslavers become helpless and complete puppets to their alien master’s will and perform even the most self-destructive actions without hesitation.   Through mental command, however, is limited to a range of up to 50 meters.

Their attraction to the mind of Psykers dictates the movements of the Enslavers with the strongest and easily traced psychic emanations coming from unprotected Human Psykers. Such vibrations can be detected as far away as ten light years with them being tracked by an Enslaver where three of their kind often merging into a band to create a mental bond with their prey. Such victims can be unaware of this at first but in time gradual changes are forced upon their body chemistry. They become lethargic and tired with their skin becoming discoloured whereupon in a period of 50-75 hours their forms swell as body tissue disintegrates as well as reforms into a living gate of ruptured pulsing flesh. This becomes the end of the victim as their body is transformed into a special form of Warp Gate that serves as a link between the Materium and the Immaterium through which the trio of Enslavers travel unrestricted. Once in the material world, they begin to enslave more Psykers including protected ones such as Astropaths who are turned into similar gateways that permit more trios of Enslavers into the Materium.

Mankind has been unable to determine if the Enslavers are intelligent in Human terms. This is because they are able to act in a rational manner and make reasonable decisions about their actions. They have never communicated with other races though whether this is because they are incapable of doing so or refusing to do so is unknown. In addition, they have never been observed to make use of tools or any other form of equipment. Theoretically, an Enslaver is certainly capable of using a weapon but has never been seen to do so. Instead, manual labour is conducted by their psychically dominated slaves.

Enslavers are slightly larger than a grown man, however other size ranges are possible as the former has been the average assessment. These xenos have sac-like bodies which contract with movement and are almost completely transparent, the front is recognizable by numerous tentacles originating from the anterior end and down to the posterior along the bottom. The face of the Enslaver is an almost mask like visage with numerous eye-holes of differing sizes. An Enslaver also possesses the abilty to phase in and out of the Materium as it manifests from a psyker. The creatures possess psykers as daemons would, yet do not show any outward signs of possession, instead working clandestinely to further it’s own ends — ultimately the possession of other psykers to allow the passage of more Enslavers. Unlike daemons, Enslavers can control non-psykers, which they consume the minds of, furthering their own power and allowing the control of more potential slaves. Eventually, with enough Enslavers or one of extraordinary power it may be able to control an entire Hive of humans and then spread across the planet, after which the only acceptable plan of action is Exterminatus.

Upon the death of a possessed psyker, the body is destroyed and the Enslaver emerges, the psyker having served its purpose. Despite the virus-like actions and considerable threat the species represents to the Imperium the Enslavers cannot possess sanctioned psykers as easily due to the preparation their minds have undergone and can be overwhelmed if enough minds are present as it will have too many minds to try and assimilate at once. Unfortunately the protection sanctionites have is temporary and with enough pressure upon their mind, they will break and be obliterated by the Enslaver. Yet even so, the resistance would be adequate for the psyker and others around them to mount a physical attack.