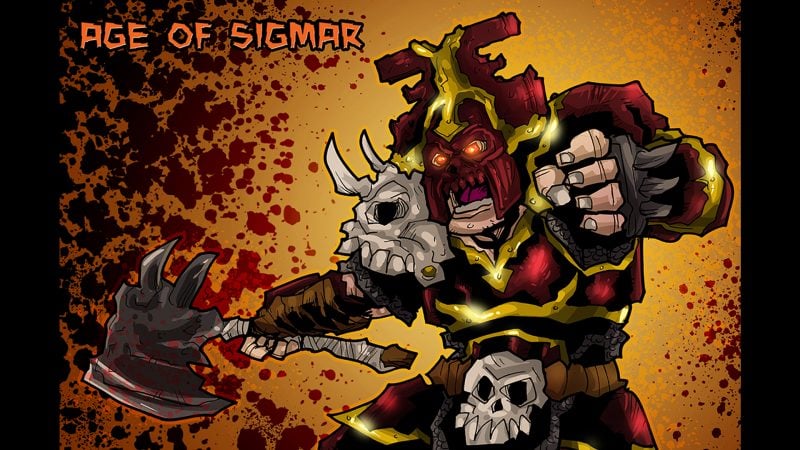 Raw Dogger and Reecius duke it out in a WRITTEN Age of Sigmar learning league bat rep! Wood Elves vs. Chaos. Who will prevail?

We agreed to 25 wounds a piece for the first round of games. I, (Reecius) brought the following: Our armies are deployed and ready for battle!

We played a modified ITC Scenario, which you can read about, here.

We played on a 4×4′ table due to the small army sizes and we agreed to roll for initiative once at the beginning of the game and keep the initiative order for the rest of the game. I lost the roll to deploy and go first, Raw Dogger opted to take first turn. The forces of Chaos, ready to charge into battle! The Wood Elves prepare for battle.

We had an objective in the middle of the table, one in the ruin in my deployment zone and one next to a hill in the Chaos deployment zone. The primary mission was Kill Points, and secondary was Mealstrom so I was looking to try and keep my squishy units alive while taking out Raw Doggers much beefier units. I’d need to win the ranged battle to pull that off! Luckily though, my units are pretty quick so I had at least a few turns to pull this off. Also, my War Hawk Rider was going to be very good for taking objectives so I wanted to keep him alive. Chaos ran towards objective 1, trying to snag it as it was one of their maelstrom missions, however, they fell short by 2″ The Wood Elves loose a volley of arrows as they fall back!

The Wood Elves fell back to the edge of their range, the War Dancers protecting their Lord. The Lord unleashed his Hail of Doom Arrow and killed 3 Blood Warriors! Brutal. As a result, he did so much damage that the Glade Guard were mostly out of range as Raw Dogger pulled casualties from closest to them. Had I put them closer, I could have used their once per game -3 Rend attack to finish off the unit! Oh well, lesson learned. I did manage to pick up a maelstrom point this turn, though, giving the Wood Elves an early lead. Chaos continues their headlong rush! They moved so fast the picture got blurry…I swear! lol

Raw Dogger continued his charge (really need to add some shooting to a list in this game if you are on foot) and moved to within striking distance. His Lord allows a mortal Chaos unit to roll 3d6 taking the two highest when charging so those Blood Warriors had good odds of making it into melee…if they lived! The Wood Elves strike first! The War Dancers charge the Blood Warriors and use their Whirling Death dance and minced the Blood Warriors, huzzah! Then, my Glade Guard unleashed their special attack on the Khorgorath for -3 rend, but biffed their rolls and only did 2 wounds, doh! My Lord fired his bow and pet Hawk into the monster as well, dealing another 2 wounds. Great turn for the Wood Elves! The Mighty Lord of Khorne charges into the War Dancers to avenge his Blood Warriors, but whiffs completely! He takes two wounds from the War Dancers in return. The Khorgorath failed its charge against the Glade Guard, giving them another chance to save themselves… The Mighty Lord of Khorne destroys the War Dancers!

The Glade Guard line up their shot on the Khorgorath…and whiff again, doh! My Lord manages to deal a single wound of damage to the beast, but it is not enough to take it down. In melee, the Chaos Lord’s dice go hot and he kills 4 of the 5 War Dancers and the 5th fails his Battle Shock test–even with the Wood Elf Lord nearby buffing his Bravery–and runs away. Uh-oh, now I have two melee threats bearing down on me and Chaos has tied the Kill Point count AND earned a Maelstrom objective! I did manage though, to snag one of my own Maelstrom Objectives with my War Hawk Rider in Raw Dogger’s backfield. Chaos has only 1 option at this point: CHARGE! And so they do. Raw Dogger gets lucky with a 10″ charge on the Khorgorath who makes it into my Glade Guard. Yikes! He gobbles up 4 of them, regaining a lost wound but due to my lord’s Bravery buff aura, only 1 of them runs away due to Battle Shock. The Mighty Lord of Khorne runs towards my Lord to try and set up a charge next turn. My options at this stage are equally limited! Like a true Elf, I run away, muahaha! My Lord falls back, peppering the Chaos Lord with Arrows and his pet Hawk, dealing another wound. In Melee, the poor Glade Guard continue to get eaten up, but hold firm while the Khorgorath regains another wound! So good. Meanwhile, my War Hawk swooped up another Maelstrom point in the backfield, huzzah! The Khorgorath eats a handful of Glade Guard, once again gaining a wound. But, they pass their Battle Shock and keep the big beastie stuck in place. To make matters worse, the Khorne Lord failed his long charge into my Lord who was had kept falling back from him. Subsequently, my Lord then filled him with arrows and killed him, snagging me a kill point!

Once again, my War Hawk swooped onto a maelstrom objective, this time in the mid field. Raw Dogger was also able to grab one as well as his Khorgorath was in my deployment zone.

The final turn and Wood Elves are looking good! In the Chaos turn, the Khorgorath gets ready to finish off the last Glade Guard but flubs his attacks and only eats 1 of them, while the lone survivor passes his Battle Shock test!  My last surviving Glade Guard subsequently leaves combat in my turn, ensuring that he does not become a kill point.

Seeing that they are not going to slay the Khorgorath and that victory was already theirs, my lord and his one surviving Glade Guard fade away into the forest! The Khorgorath will have to be destroyed another day!

What a fun game! Unlike other games of Age of Sigmar we’ve played, the inclusion of scenarios makes the game SO MUCH more interesting. Where previously our games ended up as relatively dull scrums in the middle of the table, using ITC style scenarios made the game dynamic and very enjoyable. You had to think about mission objectives and how you’d move your units into position where they would both fight the enemy and score points to win the game.

The game is just fun! Raw Dogger and I were both laughing and enjoying ourselves quite a bit. After the game, we both immediately sat down and started brainstorming how we’d make our lists better with the next 25 wounds. Raw Dogger wants more speed to make up for his weakness to shooting. He’s adding some Marauder Horsemen and possibly some Chaos Knights to really add some punch!

I am going to add in a Treeman because the model is bad ass and because I need something that can take a punch. My War Dancers hit like a freight train, but cannot take a punch at all. My Lord was a baller, and that Hail of Doom Arrow is just awesome! It took out 25% of Raw Dogger’s wounds on the first volley…brutal! I think I will also add some Sisters of the Thorn as their speed and awesome buffing spell will really help my forces out. I may add another War Hawk Rider, too, as he was certainly the man of the match, scoring almost all of my points by himself!

In all I must say, I had a great time. Age of Sigmar has such fantastic models, but the rules out of the box are too simple. With a little structure and some fun scenarios to play, the game is very fun, a completely different experience than when we first tried it. I am excited to continue to play. Thanks for reading!

As always, remember that Frontline Gaming sells Age of Sigmar product at up to 25% off, every day!