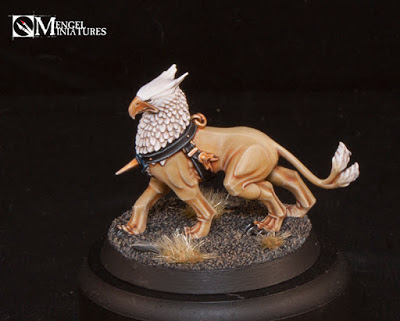 The Gryph-Hound is one of the coolest little companion pieces I have seen GW make, so I put together a tutorial on how to paint this one up!

The Gryph-Hound is one of the coolest little companion pieces I have seen GW make, so I was pretty eager to paint mine up. I went for a lion crossed with a bald eagle for mine. If you want to paint your’s similar then you’re in luck because I put together a tutorial on the whole process. 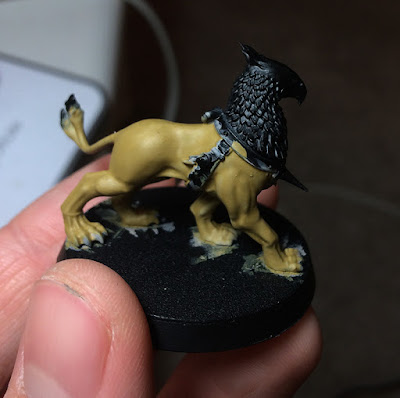 I primed this model black, so the first thing I did was paint all of the skin with a solid coat of Rakarth Flesh. This was juts to give me a nice neutral base color to work off of. It all then got a solid coat of Desert Yellow, an older GW paint. The new color equivalent is Tallarn Sand, but it’s not 100% the same. 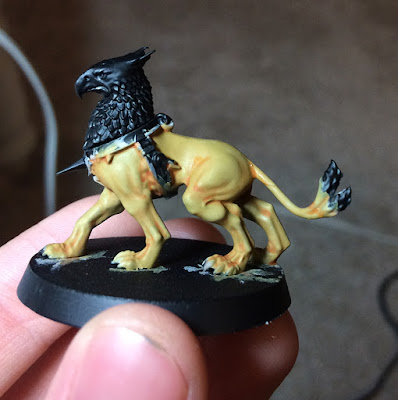 I then created a wash by mixing Skrag Brown with Lahmian Medium to shade the model. I carefully painted this into the areas I wanted it in instead of just washing the whole model with it. This saves you time on clean up later.

I darkened down the wash from the previous step by adding a little Rhinox Hide into it. I then picked out a few select areas on the model to accentuate the shadows with this new mix, mostly between toes and around a few muscles.

After that was done I went back with Desert Yellow and neatened everything up. This required me watering the paint down a lot to get some nice transitions between the colors, doing several layers. 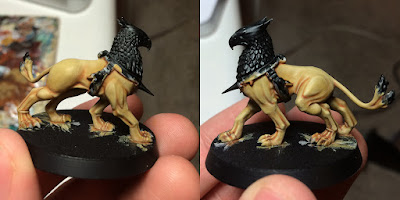 I mixed some Screaming Skull in with the Desert Yellow for the first layer of highlights. These ranged from sharp line highlights, to larger, broader highlights like across the back. For the larger highlights you will need to water it down enough to get a translucent quality to it and do several layers to build up the color. 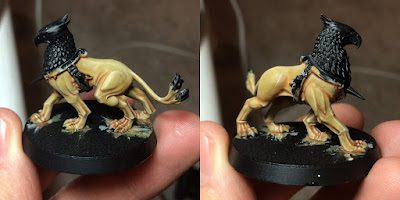 The final highlight was pure Screaming Skull which was used for line highlights only. You want to be really selective and thin with these highlights. 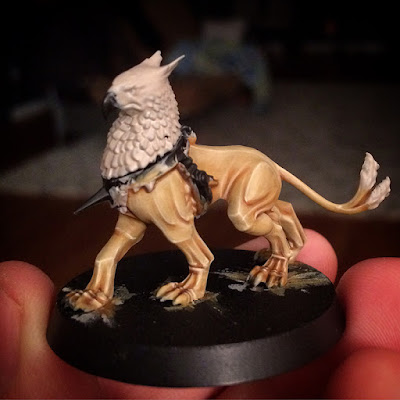 The head was base coated with a solid coat of Rakarth Flesh. 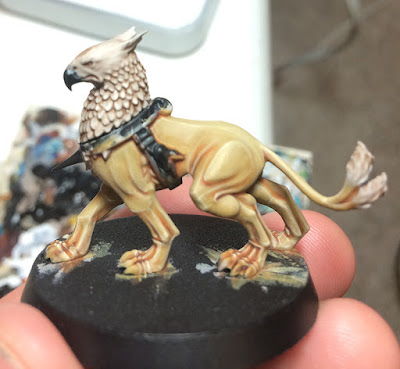 This then got a wash of Agrax Earthshade. I did this all over, but watered it down a bit so it wasn’t super dark. 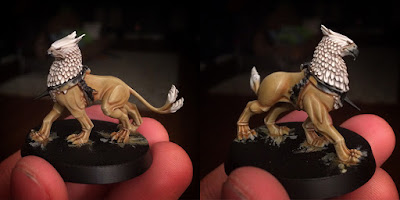 The last few steps meant going back in with a Rakarth Flesh/White mix and layering on top of the shade. I made sure to leave the Earthshade showing between all of the feathers and in the other crevices. This was then finished with a final line highlight of pure white. 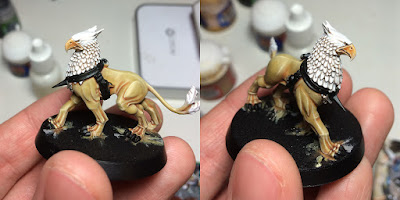 Sorry, I got carried away and forgot to take pictures of this step. I base coated the beak with Tau Sept Ochre. I then mad a wash with Skrag Brown just like I did on the skin. I carefully applied this exactly where I wanted. This got darkened down a bit more with some Rhinox Hide mixed in, especially in the nostrils and between the two parts of the beak. I had to tidy up a bit with the original color, this was mostly just to ensure a smooth transition. There is a bit of back and forth with this step to ensure the best blend you can. I then highlighted it by mixing in Screaming Skull and a final highlight of pure Screaming Skull. 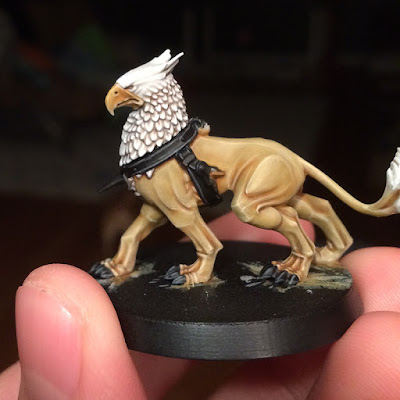 All of the black areas, the straps and claws, were repainted black and then given their first line highlight of Dawnstone Grey. 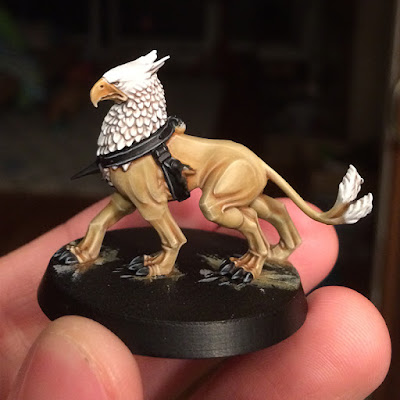 This was followed by a second, more refined highlight of Adminastratum Grey. At this point the straps are done. 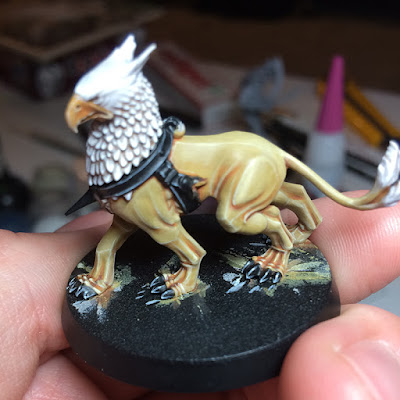 The claws were given one more highlight by mixing in a bit of white to the previous stage and focusing it on the tips. They were then finished off with a dot of white at the tips and along the top ridges to make them look shiny and extra sharp. 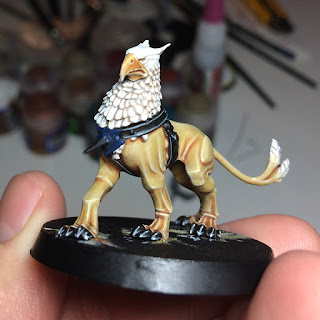 The blue was base coated with Kantor Blue then given a wash of Nuln Oil. I just focused this wash around the one areas that would have shadow near the spike. 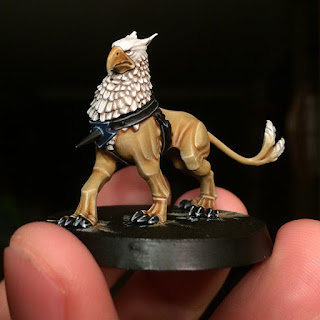 This then got two layers of line highlights by mixing in Screaming Skull, getting brighter and more selective with each layer. 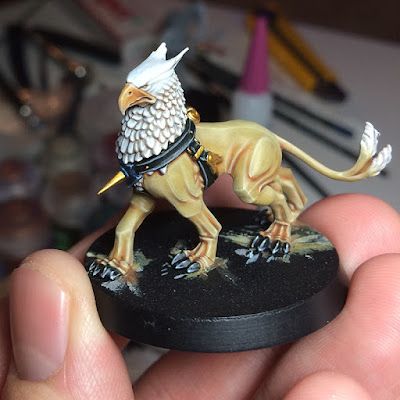 The gold areas, which consists of the spike, the comets, the clasp on the back of the straps, and the studs on the straps, were base coated with Retributor Armor. 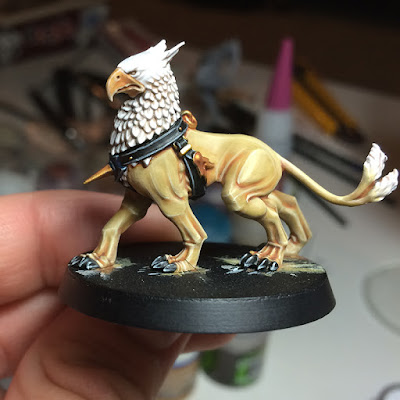 This was then given an all over wash of Reikland Fleshshade. The studs did not get a wash. 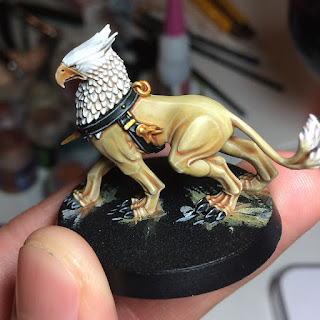 A layer of Auric Armor Gold was then applied, leaving the previous step showing through in the crevices. 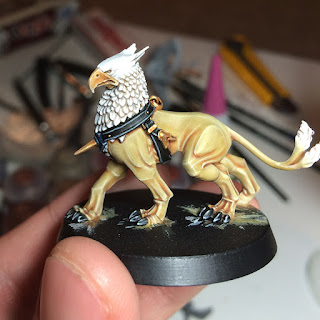 These were then given a line highlight of Liberator Gold and a final selective highlight of Runefang Steel and that’s it, the Gryph-Hound is done!

I hope that was helpful to anyone out there looking to add a loyal companion to their Lord-Castellant. If you have any questions on the process just let me know in the comments below and I’ll answer them as best as I can.