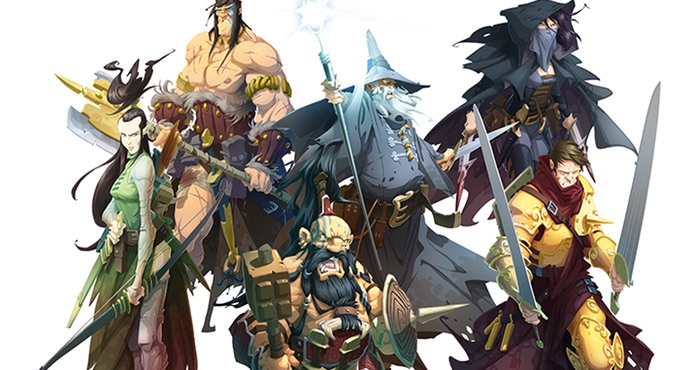 The Darkness that was vanquished long ago has returned, so now 1 to 6 players must take on the rolls of heroes searching for the legendary Lightbringers’ ancient artifacts. With them, the heroes will be able to push back the Darkness and save the world! With no game master and streamed lined rules, players will be able to focus on defeating the darkness together in this fully cooperative game.

As players progress through the campaign of Massive Darkness, they will customize their heroes with new equipment and abilities that are based on what Class they’ve paired their hero to, making sure each players has their own unique experience. You’ll be able to track your progress and equipment on the plastic dashboards included with the core game.

As heroes make their way through the dungeon, they’ll encounter several types of enemies hiding in the darkness. The most common foe faces will be Mobs, which are led by a Boss. To get to the Boss, players must make their way through his Minions first. Agents also lurk around every corner, posing a threat by themselves but also have the ability to call in reinforcements. But that’s not all because heroes must also fear the Roaming Monsters. These gargantuan foes will require strategy and teamwork to be brought down. If stopping the Darkness wasn’t reward enough, Bosses, Agents and Roaming Monsters spawn with a random piece of equipment that heroes can gain after defeating them, but beware, the monsters will use it against you first!

All combat in Massive Darkness is resolved with a single dice roll. There are two levels of Attack dice and two levels of Defense dice. Players add the attacker’s dice and defender’s dice together (taking into account any extras from equipment or skills) and make a single roll, quickly determining the outcome of the combat. Both the attacker and defender may possess special enchantments that will be triggered if their dice roll special symbols. It’s that simple!

One of the most exciting features of Massive Darkness is Shadow Mode. While in Shadow Mode, heroes cannot be seen or attacked. Enemies will ignore them unless they happen to bump right into them. The hidden hero can attack while in Shadow Mode, causing the oblivious target to lose some defense. The Darkness is a vile enemy, so our heroes must use everything they can against them, even if that means sticking to the shadows.

All of the action in Massive Darkness will play out through scenario generated dungeons built using tiles, allowing for a large amount of customization. And all heroes and monsters are represented by highly-detail plastic miniatures. Backers will also receive a Kickstarter Exclusive Roaming Monster Cyclops Cliffbreaker with their Lightbringers Pledge. Inside the core box, you’ll get:

Massive Darkness is now on Kickstarter!