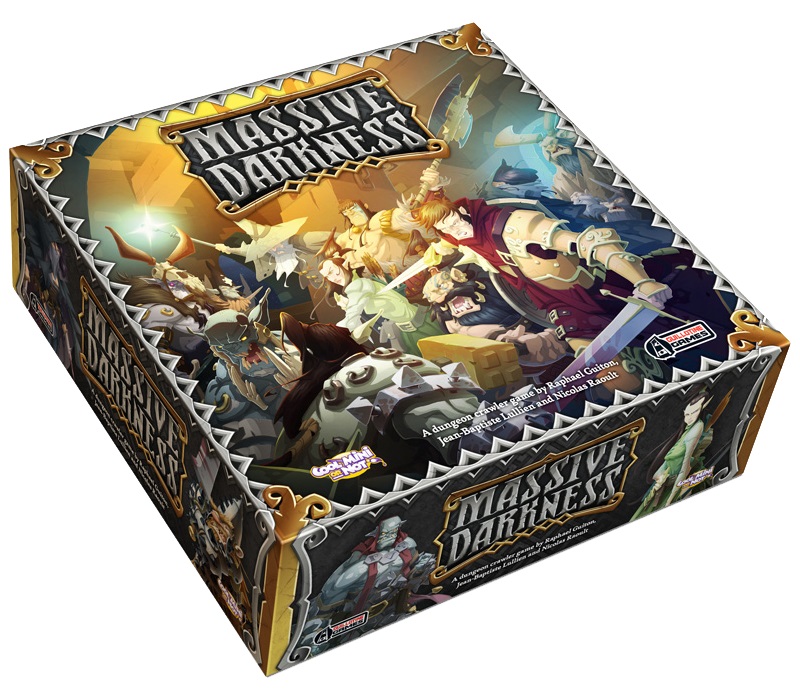 via Cool Mini or Not:

CMON and Guillotine Games’ Massive Darkness, a new, cooperative, dungeon-crawl board game is coming to Kickstarter June 7th at 3pm EST. The new game from the team that brought you Zombicide will put players in the roll of epic heroes exploring dark dungeons full of monsters. The dungeons are created using a wide variety tiles and are based on different scenarios. And because the game is fully cooperative, no one will have to play as a DM, allowing each player the chance to explore the dungeon alongside their friends, racking up the XP and advancing their Heroes!

The adventure begins with players picking their Heroes, each with special skills. Then they will pick a Class, which gives them further skills to choose from. While certain Heroes might favor a particular Class in their starting stats and skill, you can assign the Hero to any Class, further making it you own character. The Classes have unique skills and abilities to unlock as Heroes gain XP and progress further in the game.

But what are the use of skills if you don’t have cool loot to go along with them! As Heroes hack and slash their way through the dungeon, they’ll find a wide variety of weapons, potions, and other magic items that can be equipped, traded or transmuted! Some loot will come from treasure chests while others you’ll have to pry from the hands of defeated foes. When new monsters spawn, the leader of the group will get an equipment card to use against you! Meaning Heroes will have to fight for that nice, new weapon before using it. As new loot is acquired, players can use the Transmute rule to change old items into more new ones! To keep all that loot in order, you’ll be using plastic dashboards as made popular by Zombicide: Black Plague.

Heroes will be putting all of that loot to good use against the hordes of monsters roaming the dungeon. Monsters are spawned when Heroes open rooms. But that’s not all! Each round, Event cards are revealed that can create Wondering Monsters, so Heroes are never safe. Enemies will range from your average but deadly dungeon fodder to hulking brutes sure to make any Hero question their line of work. Of course, all of the monsters and Heroes are represented by beautifully sculpted miniatures!

Combat in Massive Darkness is resolved in a single roll of the dice. Players create a pool of dice based on their equipment and skills, while also adding the enemy’s defensive dice. Certain weapons and armor can also be triggered by special symbols on the dice, making them more powerful in the fight! Once rolled, you compare the attack dice to the defense dice, eliminating successful hits by the number of successful defensive rolls. And it’s as easy as that!

And now we get to one of Massive Darkness’ biggest new mechanics: Shadow Mode. Players can spend one of their three actions a turn to enter Shadow Mode or maintain it. Being in Shadow Mode allows a Hero to get an advantage on their enemies, resulting in bigger attacks and less death! Cooperation and strategy between players is key to surviving the dungeons, and wise use of Shadow Mode is highly recommended.

Learn even more about Massive Darkness and see the wonderful monster and Hero miniatures when the Kickstarter launches June 7th at 3:00 PM EST!

Ready for a new adventure?