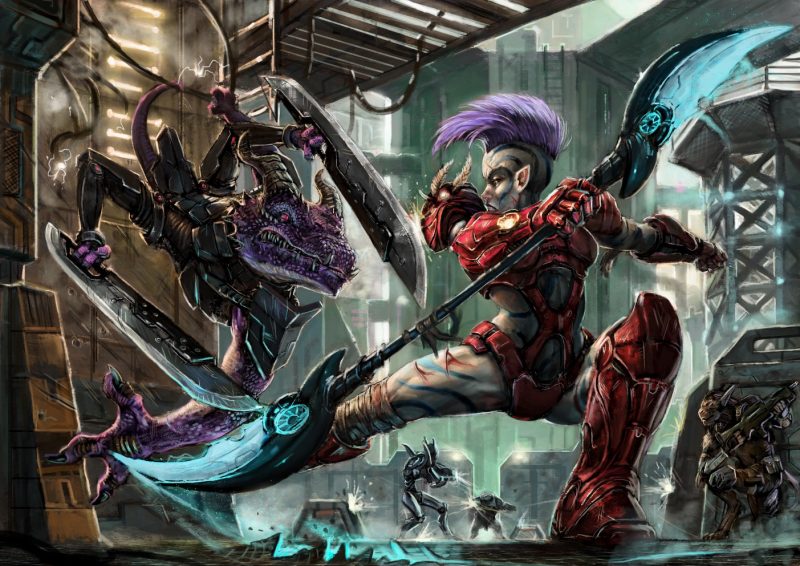 Build your Deadzone force with this new booster from Mantic Games!

The Asterians‘ technology is vastly superior to that of other races. From their powerful, yet low-energy anti-gravity systems, to their lightweight armour and materials, each Asterian soldier is a marvel of technology. The Cypher Clades take many different weapons to the field to support operations, including Missile Launchers, Force Rifles and Fission Beamers. Even the close combat weapons carried by the noble Cypher Primes are highly advanced – blades sharp enough to separate individual atoms and sophisticated energy field generators that are small enough to be handheld. Despite the abundance of benefits that technology brings, there are still those who shun it. The Kalyshi are a sub-sect of the Asterians, who believe that their kin have become too detached from ‘the old ways’. These rogues freely mix with other races from across the galaxy, preferring direct action rather than the more subtle methods of their peers. The enjoy the visceral nature of combat, taking to battle in light armour and experiencing the thrill of the hunt for themselves. While thought to be savage, this does mot mean that they are primitive. Wielding Energy Bows and mono-molecular Glaives, they are ferocious and terrifyingly fast, able to best many foes both in melee and at range. The Asterian Faction Booster contains more exotic troops to add to your Strike Teams. You can either use these to complement your existing collection, or use the box set on its own to build a Strike Team from scratch. As with other box sets, there are enough models included to build a full campaign army for Deadzone. If the Cyphers are the elites of the Asterians, then the units contained in the Faction Booster are even more so. You’ll find a Black Talon and a Cypher Specialist with a Fission Beamer, as with the Faction Starter. On top of that, there are two Cypher Specialists with Force Rifles – blast weapons to deal with concentrated enemy troops – and two more with Missile Launchers – to deal with heavily armoured foes. There are two Sky Razor Jetbikes, which can cover the board quickly in objective game and lay down withering amounts of firepower with their twin Noh Rifles.  If you’re looking for an alternate commander from the Asterian Overseer, then consider the Cypher Prime. Slightly less expensive, yet better protected than his flesh-and-blood comrade, he’s equipped for close combat – something the rest of your force may be lacking.

Speaking of close combat, the Asterian Faction Booster includes the brand new Kalyshi. There are five metal models – each individual – armed with Glaives and Energy Bows. They are highly skilled in melee and very quick on their feet. While the rest of your force can overwhelm the enemy with ranged firepower, the Kalyshi are more than capable of getting in close and cutting the foes down to size. Use them alongside your Cypher Prime as close combat specialists, or fire their bows when you aren’t able to close in.

The Asterian Faction Starter and Faction Booster are available to pre-order now and can be found in all good hobby stores from the end of June.

Who out there is planning on building an Asterian force?