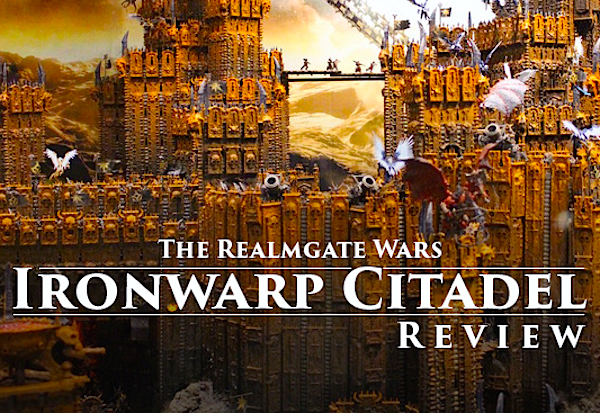 The Ironwarp Citadel is a limited edition Age of Sigmar book with Battleplans and Battalions seen nowhere else. Take a look inside!

I was lucky enough to be able to get ahold of one of the Warhammer World exclusive Ironwarp Citadel books recently. This book is meant to go along with their new giant Age of Sigmar display at the museum and is chocked full of awesome pictures of it. Not only that but it was three new Battleplans and a handful of new battalion formations as well! 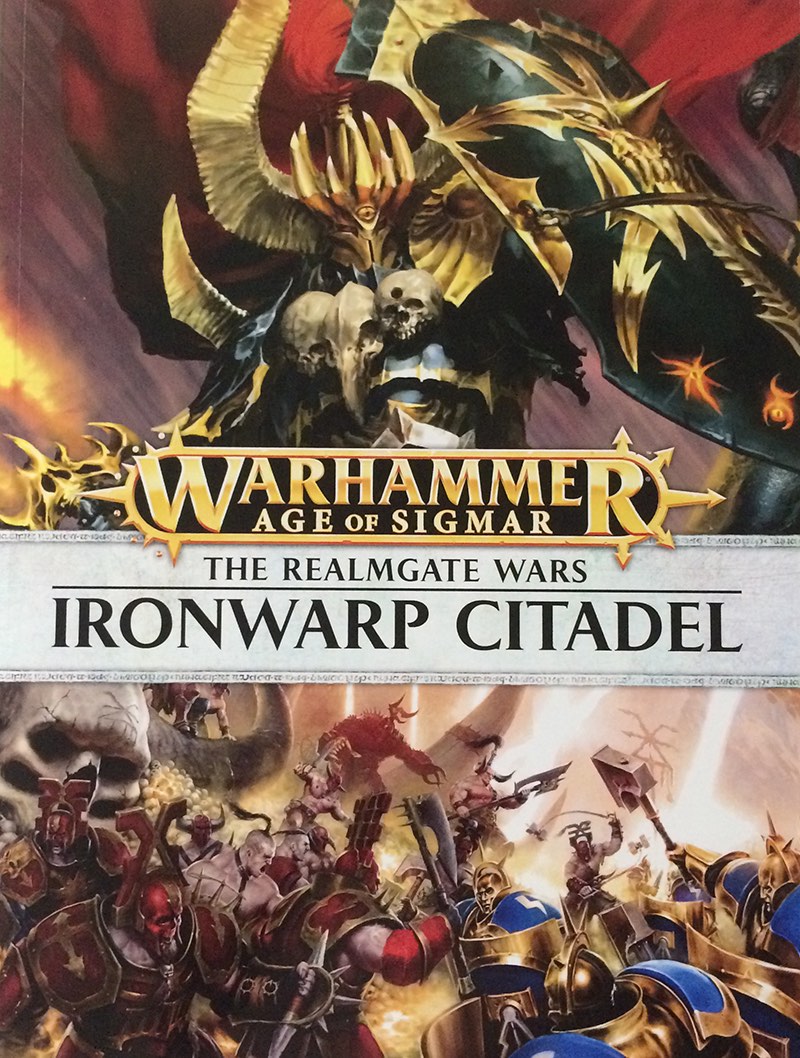 Unlike every other book for Age of Sigmar so far, this one is soft cover instead of a hard cover book. This is perfectly fine though, considering how small this is and the fact that it’s really meant to be more of a tie in to their new AoS display. Even though it’s soft cover the production values are just as high as we have come to expect, with a cover that makes it fit right in with the rest of the campaign books. 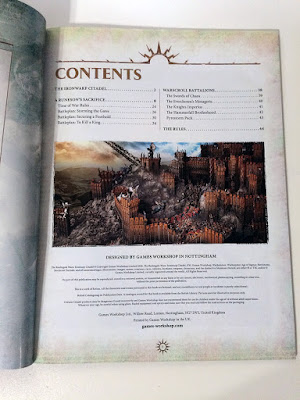 Once you open the book you are greeted with an awesome shot of the whole display, the Ironwarp Citadel itself. Man is this thing awesome looking. It’s around eight feet tall and has over 2,000 individual miniatures on it. It’s really hard to capture how awesome it is in words, so just take a look at some of these pictures. I really wish I had been able to see it in person, and hopefully someday I will make it over to Nottingham and get to take in the whole museum. 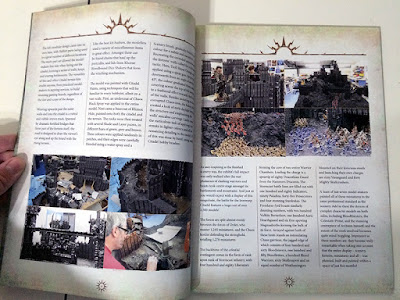 The first couple of pages are the most interesting to me. It goes over the entire construction of the display, from conception to the final dot of paint. I love this type of stuff personally. How to articles are a fantastically interesting read to me, and this one spares no expense. There are also a handful of work in progress shots of the display, ranging from across the whole process. If only I had the access to the amount of models and scenery they did, as well as the time. This whole thing took only around five months to finish. 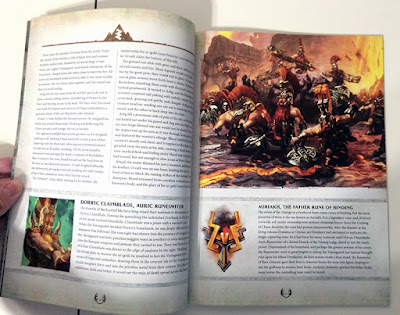 After that section is done we move on to a little bit of story. Now this whole plot with the Ironwarp Citadel is actually from the Godbeasts book from when Archaon is fighting to take control of Ignax. Instead of just retreading the same story you may have already read they decided to delve deeper. In the display there is a really cool part where the Fyreslayers are bursting through on of the citadel’s walls with the help of a couple of Magmadroths. These are of course the Runesons who were tasked with striking a very special rune onto Ignax to try and wrest control of it away from the Everchosen. It’s a fun little part and we get to see a ground level view of these Runesons fighting their way through the chaos horde. The writing is really entertaining and I was a little sad when it ended, but only because I wanted more. It’s a nice addition to the book and helps flesh out the larger story from Godbeasts. 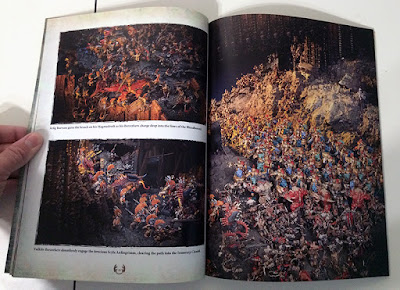 Next we get several pages of beautiful shots of the display, mostly a bunch of close up vignettes such as the Dracothian Guard charging through the citadel’s gate right into the heart of the Chaos horde. 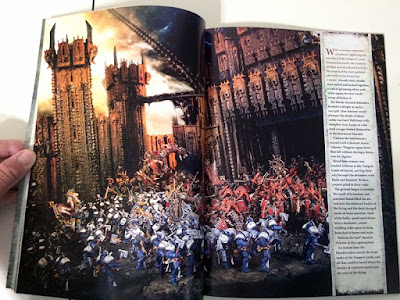 My favorite shot is of the Royal Victrians facing off against the Khorne Bloodbound led by Skaarac. Again, it’s not even worth me trying to describe them, the pictures speak for themselves. 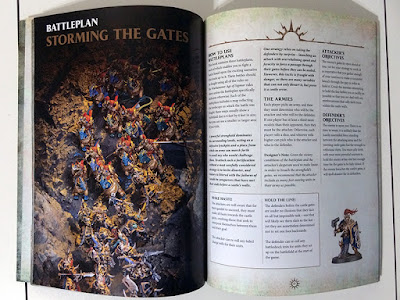 After all of this we come to the rules section, starting with three battleplans. The first one is meant to recreate the charge of the Dracothian Guard and has one player trying to get at least three units into the other player’s table edge. Both players can bring on reinforcements throughout the game and it recommends that the attacker take as many fast moving units as possible. I feel like this can easily swing to either be very difficult for the attacker, or fairly easy. It all depends on the army selection by both players. 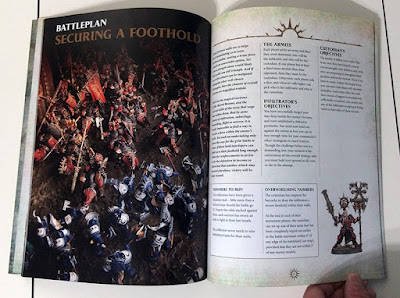 The next battleplan has one player staging a desperate last stand as they try and hold the beachhead they have secured. They must deploy their entire force in the center of the board and the other player can deploy all around them. To win they just need to have some models left at the end of the game. I think this one again can swing to being very difficult to fairly easy to win. This scenario is meant to recreate the Royal Victrians as they launched a lightning strike within the citadel’s walls. 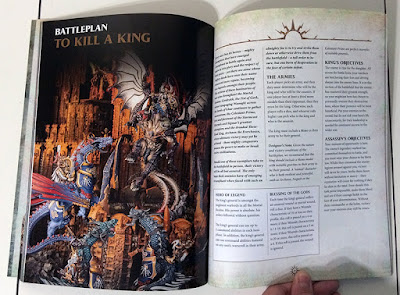 The last one looks to be the most fun to me and has one player attempting to assassinate the other’s general. This is supposed to represent Lord-Celestant Imperius trying to take down Archaon, and I think it would really benefit from using characters as tough as them too. For the attacking player to win they must either kill the opposing general or have the general flee the battle, although that only nets them a minor victory. If at any point you inflict a quarter or more wounds on the enemy general without killing them in that round they have to take a special Bravery test to see if they flee the field. I really like this mechanic, since even though you still win, you really want to kill the general. This forces you to either try and take them out in one go, or risk them fleeing. All three of these battleplans look like they would be a lot of fun to play and provide a nice challenging game for both players. 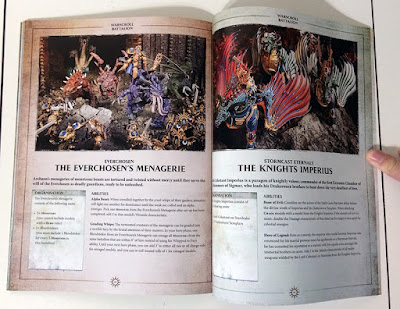 Lastly we have the battalions. There are two Chaos ones and three for Order. The Chaos battalions consists of a Menagerie of Monsters, which is literally just any five monsters as well as a Bloodstoker, and my favorite, the Sword of Chaos. This one makes you take 3-9 units of Varanguard with at least three models in each unit and gives them some pretty nasty bonuses in return, like getting to charge again if you wipe out the enemy unit on the first charge. Order also has some fun ones, like Imperius’ Stardrake charge against Arachaon, a set of three Magmadroths to represent the Runesons, and the Celestant-Prime with a bunch of Retributors. By a bunch I mean 5-10 units, but again, they get some really good bonuses from it, so if you can take the units, it’ll be worth it. I liked all of the battalions in here. They all seemed fairly useful, and most importantly, they all seemed very fitting to the story being told. The whole thing then finished off with the four pages of rules and even more gorgeous display shots. 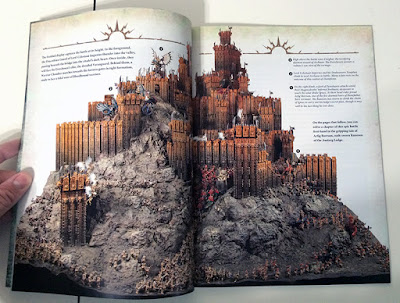 If you are in Warhammer World I would definitely recommend picking this up, especially since it is only £12, or even have a friend pick it up for you if you are unable to go there in person. Being able to look through the close up shots of the display later is worth the price alone, but all of the other content just makes it even better. Now, to find a plane to stowaway on to Nottingham…

You can find a bunch of great pictures of the display itself here on the TGA Community thanks to Ben Curry of the Bad Dice Podcast, who also has his own coverage of the book here. That’s where I nabbed that fantastic shot of the display that graces the cover image of this review.