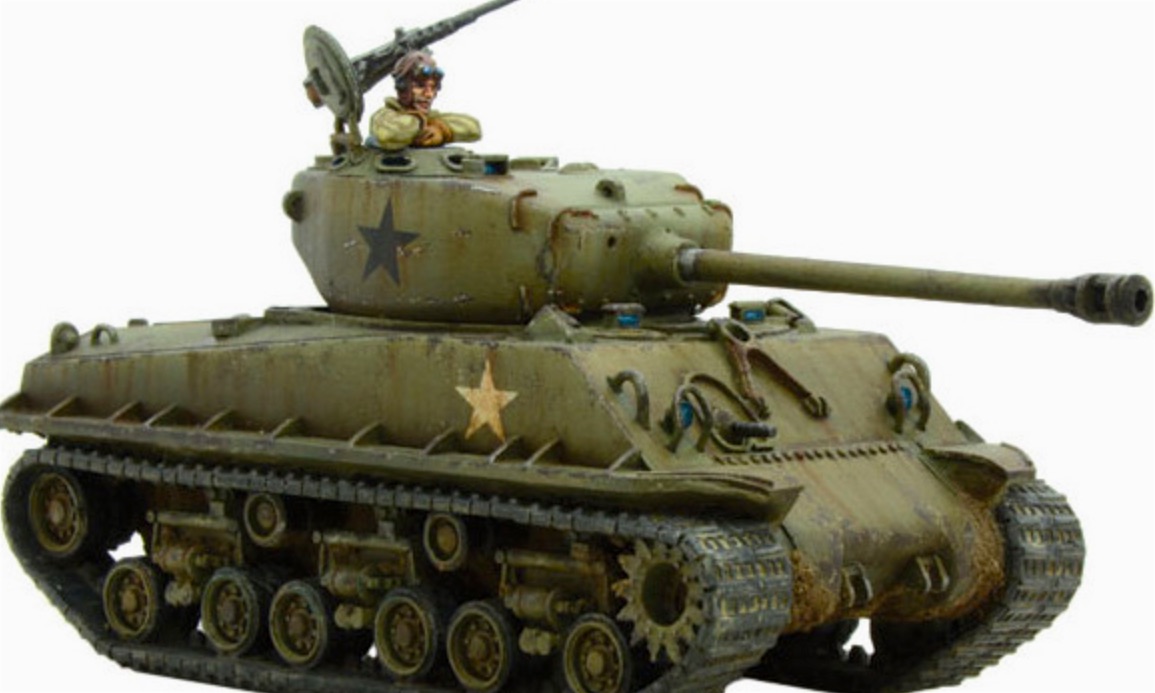 Andy Singleton puts these two late war rivals head to head in this episode of Vs: the German StuH 42 assault gun, and the American M4A3E8 76mm. Both fill specific rolls – how do they fit in your Bolt Action forces? Find out…

The StuH 42, or ‘Sturmhaubitz 42 Sdkfz 142/2’ to give It it’s full name, entered service I late 1942 and was an adaptation of the StuG III. Initially a variation of the Ausf F variant was used, but from mid 1943 the Ausf G variant (As depicted in the marvellous Warlord plastic kit) became prevalent. The key difference between the StuG and the StuH is the main armament, with the StuH being fitted with a 105mm howitzer. This weapon packed a lower muzzle velocity than the StuG III’s 75mm gun, however also had a much larger and more effective high explosive round, rendering it very effective with its intended role of neutralizing hostile infantry and artillery positions. StuG and StuH’s that served in their own independent Sturmgeschütz brigades were intended to feature three batteries, with each battery consisting of two platoons of four StuG III’s, and the third battery being made up of 4 StuH 42’s, though actually achieving this level of formation was uncommon. The Brigades were also intended to have a further 2 StuG III’s as command vehicles. By March 1945 approximately 1200 StuH 42 had been built, and none served with Germany’s allies during the Second World War, however post war several found their way to Syria and may have served up until 1967.
The model used in this article is my conversion of Warlords plastic kit, and you can read how I carried this out here.

The StuH 42 is available for most German theatre selectors from about 1943 onwards, and is a very tempting addition to any force. For 190 points at regular you get an armour 9+ MMG with a 360 degree rate of fire, and a casemate mounted medium howitzer. For an extra 10 points you can equip the vehicle with Schürzen plates, to give it a little more protection from infantry anti-tank weaponry. On the table, the StuH’s medium howitzer has +3 pen, and 2D6 HE. This makes it extraordinarily effective at taking out infantry, even veterans who have taken cover in a building will fear this vehicle, as even average rolls are likely to remove most squads from the game, (If you can hit them anyway…), the MMG is worth remembering too as it is a very respectable way to put a pin on some lurking infantry.

With +3 pen, the StuH can threaten up to enemy medium armour, and can also potentially put pins onto even the heaviest of vehicles.
With the small size of the StuH being a further asset, the vehicle is relatively easy to conceal, and can be used to shore up a flank, or spear head an assault. This vehicle is so effective I thoroughly recommend trying one out!

The Sherman tank is probably the most famous tank of all time, at least in the western world, and was produced in huge numbers from 1942, with nearly 50,000 being produced before 1945. One of the last wartime variant’s to see mass production, was the M4A3E8, an improved version of the M4A3 that had served with the US and Free French forces notably in the Normandy campaign, but also throughout the rest of the worlds conflict as well. The M4A3E8 featured a redesigned suspension, and was built with a 76mm gun. The new suspension gave a far smoother ride than had been present in previous models, and also gave the tank far greater punch against axis armour. Production of the M4A3E8 started in August 1944, and around 4000 of this variant were produced. The Easy 8 went on to see significant post war service, notably with the US forces in Korea, and also with the fledgling Israeli military, where the tank was upgraded to levels that couldn’t even have been dreamt of in the Second World War. Today, the Easy 8 is one of the more common variants of Sherman to see in museums, and is also the titular star of the movie ‘Fury’ (More or less).

The Easy8 is not specifically distinguished from other 76mm armed Sherman’s in Bolt Action, however in my mind it’s far, far prettier!

At 235points for a regular, armour 9+ heavy anti-tank gun with two MMG’s the Easy8 isn’t cheap, however where it really starts to shine is with the optional upgrades you can load onto it. For an extra +15 you can equip the tank with a third MMG, and for 25points this can be a HMG instead. This upgrade gives you the potential to be using 3 weapon systems in a turn, and potentially pinning or killing 3 enemies with one activation. The 76mm heavy anti-tank gun allows you to reach out and touch any enemy vehicle, even a super heavy can be hurt at very respectable distances, although with only medium armour you will still have to think a little about how you position yourself in case the dice Gods go against you. To make this an easier (Geddit?) option, you can upgrade your tank to veteran, and whilst costing a slightly eye watering 292 points, it gains the gyrostabilizer rule, allowing you to fire on the move with no penalty, thus allowing you to position from the safety of terrain after the potential threats have activated, and then either follow up by escaping next turn, or trying your luck with a further shot.

To sum up, both of these vehicles are exceptionally useful, but Easy 8 is a great all-rounder, with good anti-tank capability, but also a strong presence of machine guns to pin down enemy troops, it’s only downside being that it can rapidly become expensive once you start upgrading and choosing all the toys for it. On the other hand, the StuH is a cheap, and efficient infantry support vehicle, which excels in its role of backing up your boots on the ground, and whilst not a particularly brilliant tank killer, can still give most enemies pause for thought before engaging.

How would you use these two in your Bolt Action forces?