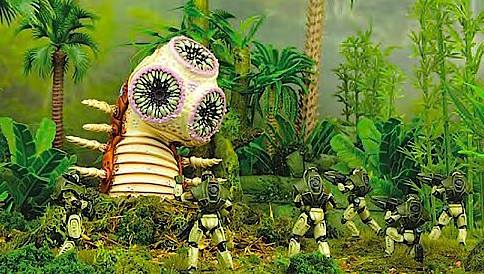 Battle the monstrous appetites of the Gulpers of Xilos in this new, free scenario…(BURP)

If the IMTel can be described as one thing, inquisitive would certainly be a contender. With the landing on Xilos successful, the opportunity to learn more about the planet jugged at the binary circuits. A whole Builder world to explore and learn the secrets of. Biological algorithms returned as unacceptable the risk of leaving the secrets of the planet behind should they need to evacuate. Military level intelligence passed from the Algoryn to the Concord indicated the higher activity density regions of the new enemy, the Ghar.

As with the majority of information shared to a shard, it was not long until a decision had been made for a couple of survey teams to be dispatched. The small number of survey teams being dispatched reflected the current tactical situation as only limited number of armed Strike Teams could be made available.

With news of Ghar movement the survey teams were recalled. Limited information was recovered, but even a little information can lead to an advantage. But within much of the success one of the recon drone had returned without its survey team. Along with many mundane pictures of vegetation, rock formations and small mammals, it carried back a shocking image.

Telemetry patched through from the missing survey team’s recorder probe suggested the ‘creature’ had been moving underground with reasonable velocity. Once the beacon within the probe had become stationary the IMTel had a decision. Retrieve the probe and risk further casualties. Or risk the data collected from the probe from being exploited by the recent arrivals of mercenary Freeborn or Boromites. As risk adverse as the IMTel is, the risk to not collecting the survey probe was too great, the loss of vital information could not be permitted. A small team was assembled and dispatched to make the recovery.

Check Out the Full Scenario Refer to Xilos expansion book ‘The Battle For Xilos‘ page 70 for the rules for Gulpers.

Additionally for this scenario, the Gulper may make a Ground Burst Attack.

Ground Burst attack:
If the Gulper is not already on the table when the Dangerous Fauna Dice is drawn, then the Gulper enters play using this Ground Burst Attack Method. First, check to see if any of the crater nests have any players unit’s in them. Any that do are considered to be under threat from a Ground Burst. If none of the crater nests have any player’s units in them then ALL crater nests are under threat. Randomise between the crater nests under threat in a mutually agreeable manner. D3/D2 or if just one, then that automatically is attacked.
Place the Gulper model on the direct centre of the attacked crater nest, or as close to the centre as possible where player’s unit models permit. Measure 5” from the edge of the Gulpers base. Any unit with a model within this distance take D3 automatic pins as the ground shakes beneath their feet and the ferocity of the surprise attack. Suspensored units ignore this effect. If a unit is within contact with the Gulper, this takes D6 pins and is immediately forced into a round of Hand to Hand fighting (the unit may react with a Down reaction if permitted, taking half the number of pins in keeping with being Down). Note that no Point Blank Range firing takes place for this assault, as the beast is upon them immediately.
If the Gulper does not win the round of Hand to Hand combat it will immediately burrow back into the ground and prepare for a Ground Burst next turn.

Normal movement:
If the Gulper is already on the table when activated, it may only be given a run order. The player that won control of the Dangerous Fauna may move the Gulper up to 10” in any direction, even launching an assault against a unit. In this situation, where an assault is launched while the Gulper is already on the table, the usual round of Point Blank Shooting precedes the striking of blows in Hand to Hand combat as normal. The Gulper ignores all terrain, but may not pass through buildings etc as noted on pages 72/73 of the Xilos expansion. If the Gulper is destroyed, the unit that caused the killing blow scores the appropriate Victory Points.

Check Out the Full Gulper Rules

This looks like a blast to play – I can’t wait to use this scenario onto the table top.

Are you playing The Battle for Xilos – what do you think of the expansion?