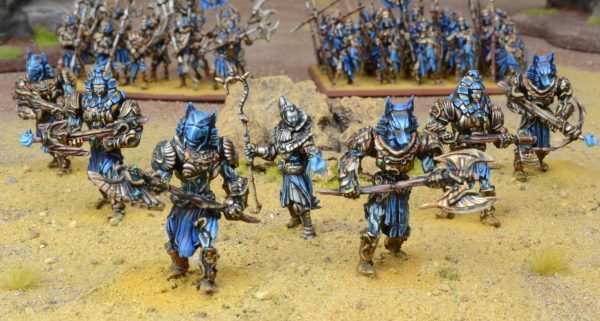 The Ahmunite empire, stripped of their power by the Ophidians, wages a war on the living and the dead. They march across the scotched desert fueled by hate, and compelled by necromancy.

These powerful desert spirits will crush your opponent, with their incredible strength, their magic and even the sight of them would create fear in your enemies’ eyes. This unit has should be enough to scare any foe into routing. These models have a high degree of detail and quality, which’ll provide hours of painting enjoyment. Add this unit to your army to make it look amazing. You choose how the models look by deciding what weapons they hold for battle and how you win the game with them.  They can be built with either large, two-handed axes or enchanted heavy crossbows.

Although the Enslaved Guardians are not numerous they should still be kept in your army list. Their Windblast power can push attacking enemy units back out of charge range. The two weapon options allow them to be fielded either as powerful range troops or crushing melee regiments. Never leave home without them.

Enslaved Guardians are now available for pre-order. Pick up yours now!

Will you be adding these to your army?