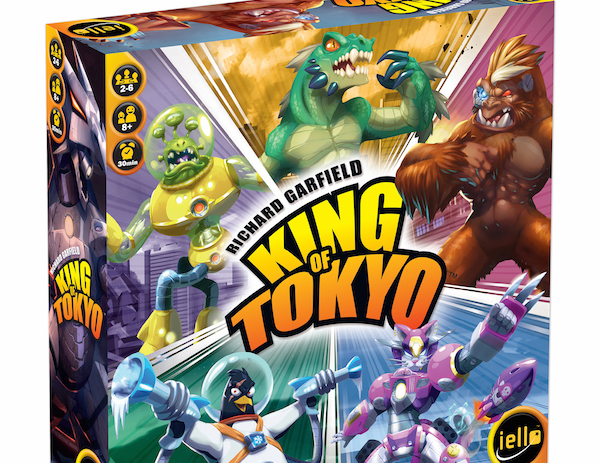 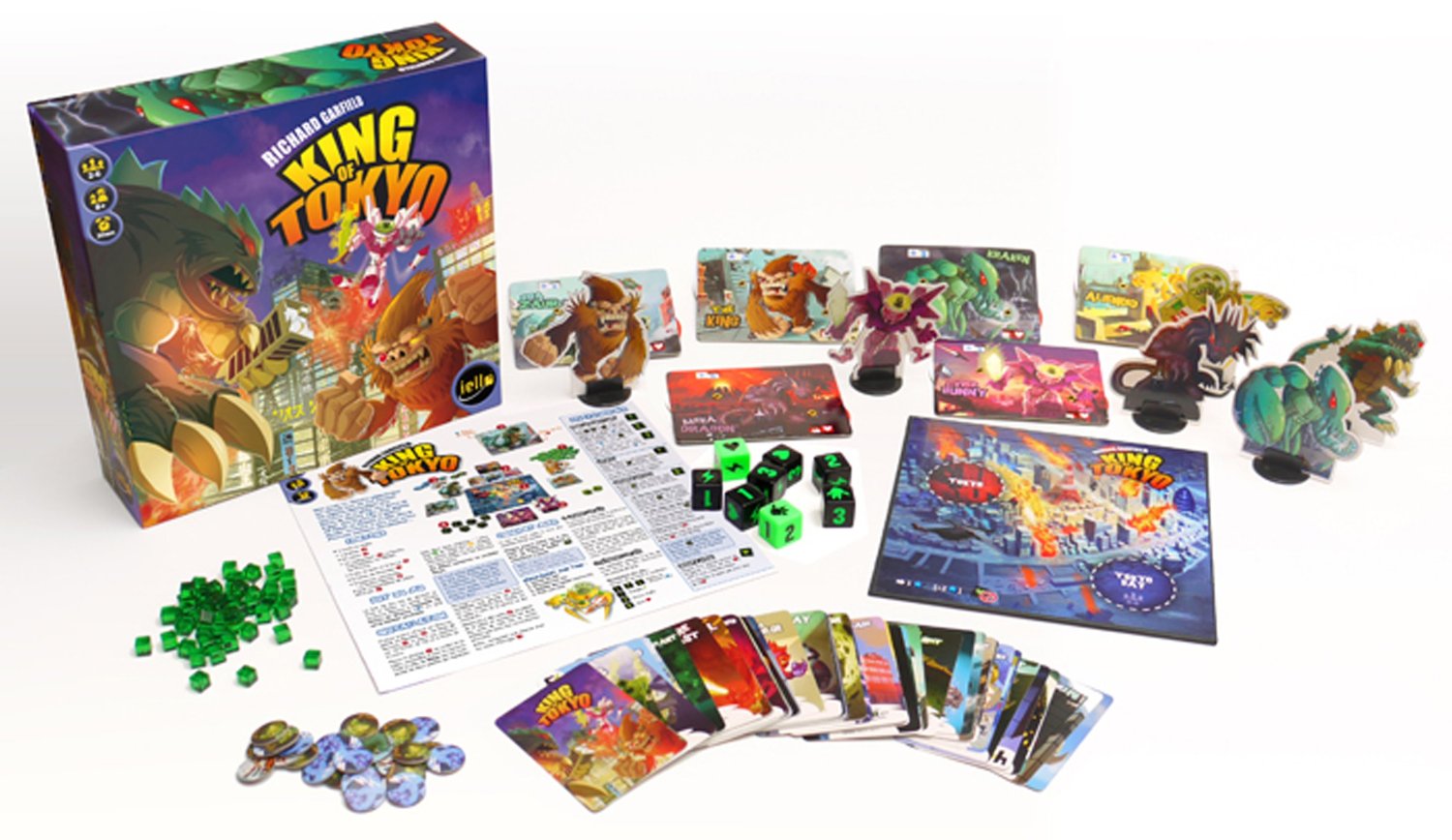 The Tabletop Spotlight is on King of Tokyo!

Our friends and Dragon’s Lair Comics & Fantasy brought over a class that has been updated with some new illustrations, updated rules and two new monsters! It a throw-down on MONSTROUS proportions:

I’ve played lots games of King of Tokyo – it’s quick and fun. With a little luck and some smart play the game can be very rewarding. And it should be – the game designer is none other than Richard Garfield. You might know his as “The Magic: The Gathering” Guy. It’s got the pedigree and this updated version has some changes even veterans of the game will appreciate.

The first big change is that all the art was updated. The picture at the top of this article is from the original box set. All the monsters and cards have been re-illistrated for this 5 year anniversary edition: 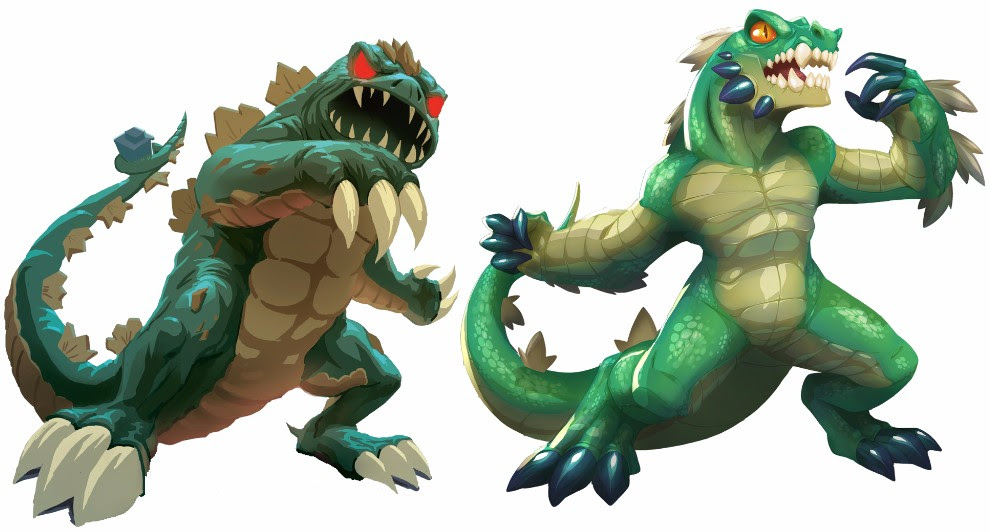 Old Gigazuar on the Left, New on the Right

The new set has a new cover as well as the Space Penguin (who used to be a tournament exclusive) and Cyber Kitty. 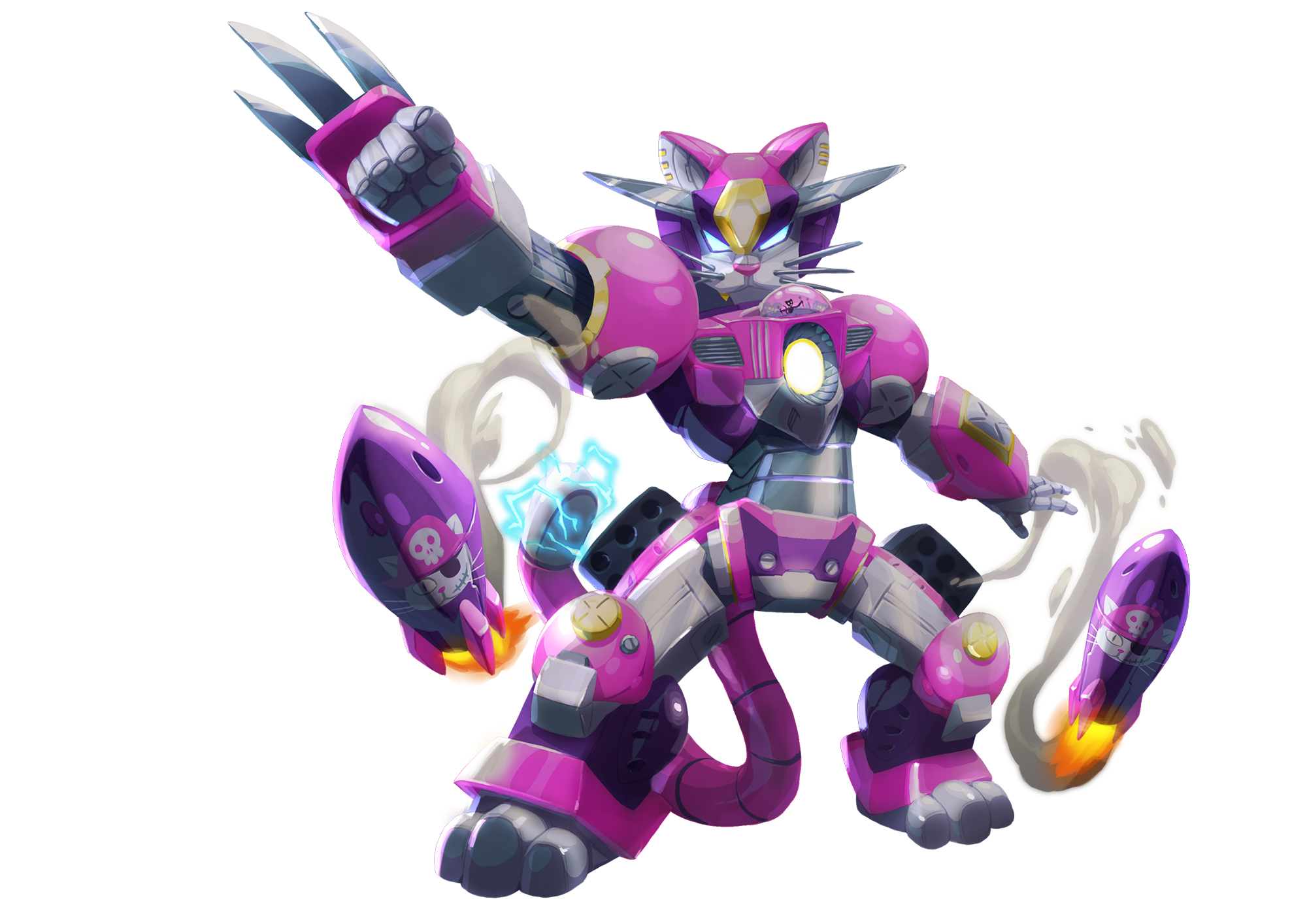 Functionally, these new monsters are the same – they just provide more options for players and might cater to different crowds. This is a pretty fun family game after all – not everyone wants to play as a “scary” monster. I prefer  “The King” myself because cybernetic enhanced super apes are cool to me. Maybe you’re more of a “Meka Dragon” player. Whatever the case this game has you covered.

The game play is really easy to understand. It’s a race to 20 victory points or to be the last monster standing. Monsters can jump in the middle of the board and do some serious damage and rack up the points, but monsters on the outside can target them and retaliate. You can also heal on the outside, unlike the middle. The dice mechanics are also super easy to understand. It’s ages 8+ so it would need to be. But don’t think the simplicity is going to mean adults will be bored. There is a certain amount of  “table politics” at play as well. Will you work with your fellow monsters to take out the current “King of Tokyo” or will you skip out on the alliance to take care of yourself?

King of Tokyo is a really fun game to play with your family and your friends. It’s a modern classic and if you haven’t given it a shot this updated box is the perfect time to hop in! 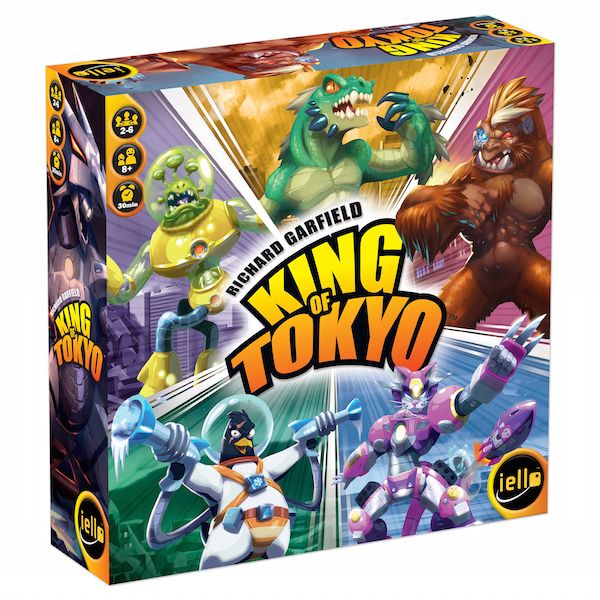 On the 5th anniversary of the release of the best-seller by Richard Garfield, King of Tokyo gets a facelift with a new version, entirely redone by a group of artists* lead by Régis Torres, who previously illustrated the Halloween expansion pack and King of New York.

In addition to these exclusive illustrations, this new version will have a new rulebook that was reworked to be clearer, as well as two new monsters: the ever-so-popular Space Penguin (the original version, highly sought-after by players, was only available through tournaments) and Cyber Kitty.

Play mutant monsters, gigantic robots and other monstrous creatures, rampaging the city and vying for position as the one and only King of Tokyo!

Combine your dice to gather energy, heal your monster or just slap the other monsters down! Spend your energy to trigger permanent or one-shot special powers: a second head, body armor, nova death ray…

Stop at nothing to become the King of Tokyo… but that’s when the real trouble begins for you!