Jump into the DeLorean with Doc Brown and time hop forwards and backwards with the first Weekly White Dwarf.

We’re on the cusp of a new era for White Dwarf  and sometimes to see where you’re going it’s good to look back to where you’ve been. Today, we’re going to cover not only the first White Dwarf but also the first Age of Sigmar Start collecting book to try and compare to what’s coming this week! The weekly White Dwarf was unleashed on an unsuspecting public in February of 2014. This ushered in a product assault that’s been keeping us on our hobby feet for the past two years.

On page one, you can see that they used to bunch up all the new releases on one page; now they have them spread out. I’m not sure why they did this exactly. If I had to guess it’s because someone could take a picture of the first page and say, “hey guys, look what’s coming out this week!” and then it was all over the internet and stealing Games Workshops thunder. Stuff is still getting out and I’m sure once they move to a monthly there will still be leaks; albeit not weekly of course. It’s hard to have a product like this and not have it end up on the Internet sooner or later.

February was a short month and the magazined featured some short dwarves. These models where great for the time but they just don’t stack up well against the new Fyreslayers so I’m looking forward to seeing how the Steelheads turn out. They had an interview with Jervis Johnson in this first issue and I cant’ remember the last time I saw him featured in a White Dwarf, I think this was the last one. 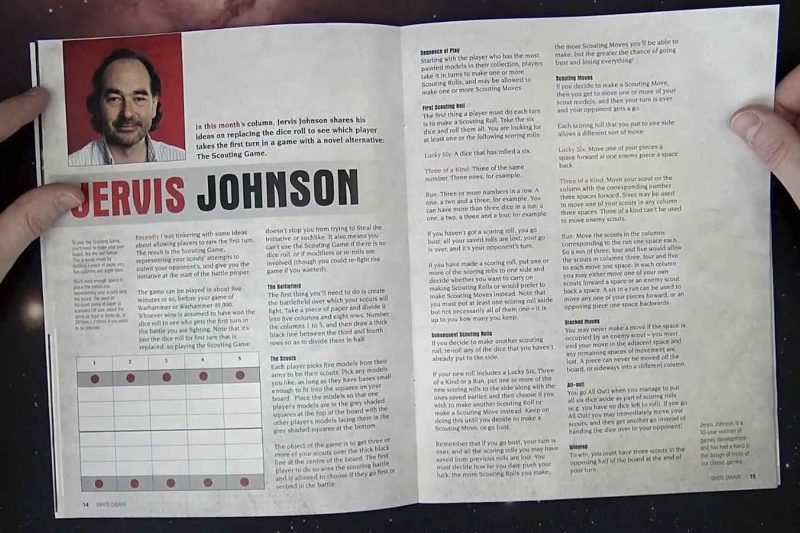 They had a paint splatter, which I hope they carry over into the new White Dwarf. They also had Sprues and Glue section which we  don’t see any more, they’ve taken that out and replaced it with other features. I think it would cool to see that comeback. In the back, you’ll notice they didn’t have any teasers. I’m not sure when they started that. They had a few ad heavy issues when they switched to the the weekly format. Recently they’ve been moving to adding more rules and I hope they continue that. If you’re spending 8 dollars a week you need more reason to pick these up weekly. So hopefully the monthly White Dwarf will be more of a value.

Recently, they released a great “Start collecting Age of Sigmar” magazine and if that’s the formula for the new white dwarf sign me up! Taking a look at it, you can see there’s a ton of great art, 12 pages of how to paint. (12 pages!) If this portents what is coming I can’t wait. They have a ton of battle plans, rules for the game which includes more pictures. Even the ads are acceptable in the Start Collecting Age of Sigmar magazine to me because they included some great models. I’ll pay that 8 dollars for that, all day long, because this is an incredible layout. I’m so impressed with it and I’m hoping to see this becoming the new White Dwarf.