The Battle for Necetavus VI continues as Slash and Burn hits shelves this week – Come see what tricks the Eldar are getting!

The Eldar are making a splash with the new Slash and Burn War Pack for  Warhammer 40,000: Conquest from Fantasy Flight Games. Making it’s debut today at your local retailers and also at GenCon 2016, this war pack continues the Death World Cycle in this epic conflict and today we’re getting a peek at the Eldar’s new toys. 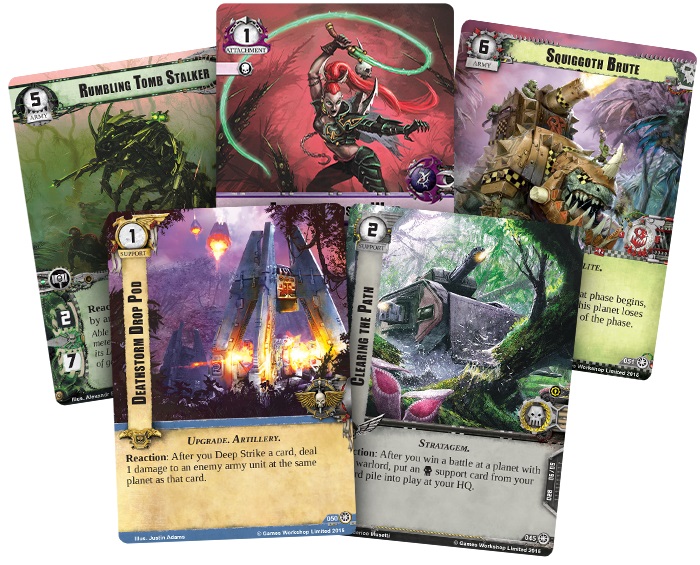 This War Pack features new support cards to help beef up your Elite units as well as a few new vehicles to play with. The War Walker Squadron brings the heavy guns to the party and with the Hardpoint keyword, they’ll be able to stay there longer as well. 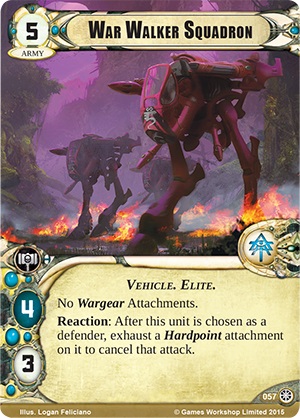 These War Walkers aren’t the only ones bringing the heat – this war pack also has you covered with air support, too. The new Phoenix Attack Fighter is a quick-hitting ace up your sleeve. 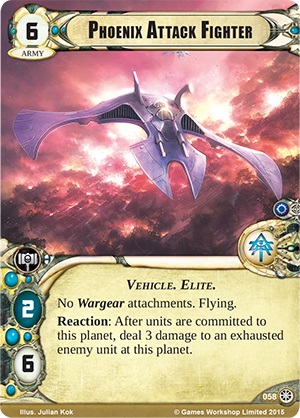 Pairing this unit with the right support (or Eldorath Starbane) can allow you to potientially wipe out a target before the first round of combat! Hitting hard and fast before the enemy can retaliate? Sounds like an Eldar plan to me!

The last trick the Eldar are getting with Slash and Burn is the new Webway Passage card. 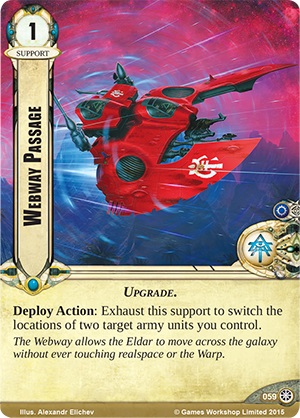 This is a fantastic way to out maneuver your opponents. If you want to counter-deploy then being able to bait-and-switch unit with this card is what you need in your deck. Alternatively this card allows you to pull weakened units out of the fight and get some fresh ones up to the front in one fell swoop!

For more tips and tricks go check out the full article from Fantasy Flight Games! Don’t forget – Slash and Burn isn’t just for Eldar players! It’s got cards every faction is going to want to get their hands on…and it’s in stores NOW! 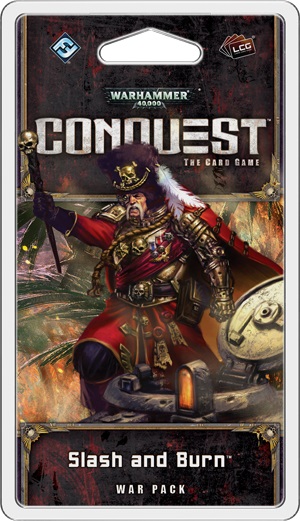 The Warp has broken into realspace above a jungle-covered Death World. Now, the Dark Angels legion meets the forces of Chaos in the breach, led by Epistolary Vezuel. The Space Marines are not alone in their desperate attack, of course. They are supported by a massive force of the Vostroyan Firstborn, who now face the greatest test of the quality of their tactics and the strength of their armored forces—the Warp-infused jungles of Nectavus VI!

Slash and Burn invites you to continue the battle for Nectavus VI in all your games of Warhammer 40,000: Conquest. A new keyword—Deep Strike—has given your units, attachments, and events the ability to secretly enter the battlefield, only revealing their presence seconds before battle is joined. You’ll also find a wealth of new support for Elite units, including cheaper units that offer powerful benefits to their faction’s Elites. Finally, Slash and Burn introduces a new warlord for the Astra Militarum faction, inviting you to lead a squadron of tanks in a blaze of carnage and glory through the densely-packed jungles.

The Eldar always have tricks up their sleeves…

GW: You'll Never Guess Who's Back