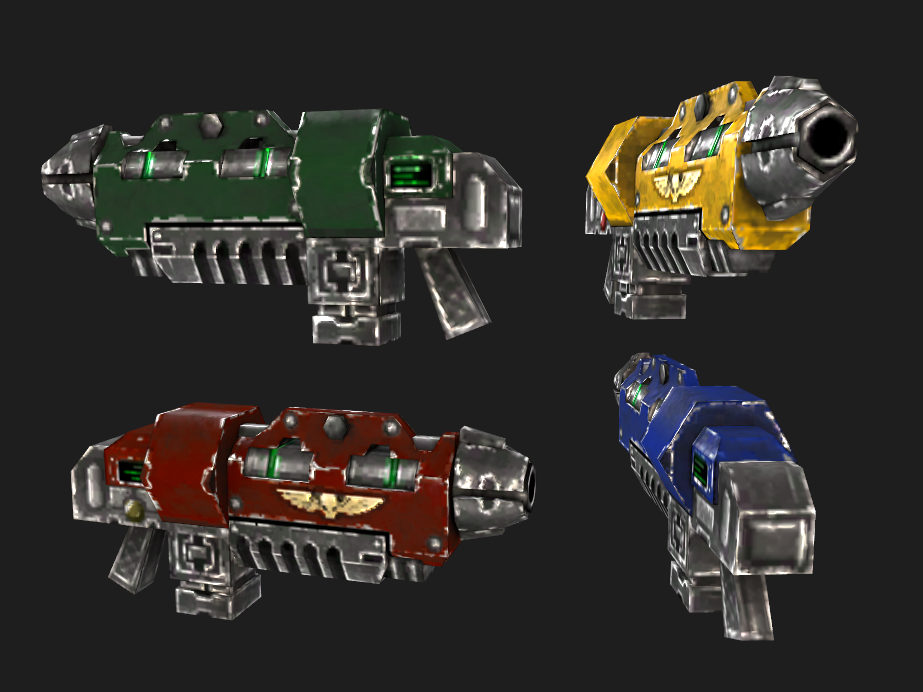 Codex: Grav has become a powerful force in the 40k universe. Take a look at the history of this noble race and its impact upon the game.

A Guest article written by Michael Corr. For more reviews, analyses and battle reports, check out the Tactics Corner.

When I reviewed the Devastator Squad recently, Grav Cannons were obviously a big part of the review. It was suggested in the comments that Codex: Grav Cannons receive their own review. With that in mind, I put together a tongue in cheek review of the newest 40k race: The Gravitons. This is obviously intended as a bit of fun, no digs at any players or play styles are intended, I even run a grav-heavy White Scars army myself.

In homage to Codex: Grav, I intend to spam this image throughout the article.

The origins of the Grav race were first hinted at in the 2nd edition of 40k. The Wargear book list the Graviton Gun, where it automatically immobilized any target that was hit (preventing them from moving and shooting) and did greater damage to vehicles and building. The power of the Graviton gun was readily apparent against infantry targets. The rules state that the weapon works on vehicles, but this effect was never once observed during a game. Owing to the vehicle rules for 2nd edition 40k, an advanced degree in mathematics and reams of paper were required for note keeping and assessment of vehicle damage. In 1994, the British Government passed the “Priestley Act”, banning the use of vehicles in 2nd edition 40k in an effort to halt the rampart deforestation occurring in England thanks to many players’ attempts to take tanks.

After second edition, the Grav gun was lost from the 40k universe for a while as the Graviton race went into hibernation (they had purchased a time share in partnership with the Necrons). With the release of 6th edition 40k, the Graviton race came back with a strong resurgence. The rise of Tau battlesuits, Eldar Wraithkights, Tyranid Monstrous Creatures and vehicles that were able to move brought many Space Marine players to the brink of tears. Their cries of despair at the overpowered nonsense of the Xenos races summoned forth the Graviton race to provide the Adeptus Astartes with their own brand of overpowered nonsense. Codex: Grav was born and the history and motives of this enigmatic race has been greatly expanded ever since.

The Graviton race are no mere weapons for the employ of the Imperium. They are in fact a powerful symbiotic race who bond with other armies to fully unleash their powers. In the short time that they have emerged, they have become seamlessly intertwined with the Space Marine army, so much so in fact that it is rare to see such an army without a contingent of the Graviton race.

Only the mighty Space Wolves have eschewed the offerings of the Grav race. Papa Logan’s magnificent sled was deemed so precious and powerful that the Space Wolves did not wish to risk its permanent damage from a stray grav shot that they decided not to take any. The Eldar have long since been thought of as the most powerful psychic race in the universe, but this title is actually held by the Graviton race. After the destruction of Horus and banishment of the Traitor Legions, the Graviton race enacted their most powerful enchantment yet. They wiped all knowledge of the manufacture and use of Grav weaponry from the mind of every Traitor Space Marine, even though they had been using one, like literally five minutes ago. This powerful enchantment has lasted the 10 long millennia that Chaos has been at war with the Imperium. The greatest threat that the Imperium has ever know could not be allowed to have access to amazing weapons (or a competitive codex).

The secret reason for this is that the Graviton race is powered by the tears of Chaos Space Marine players, the same as Games Workshop HQ in Nottingham.

The Graviton race is notoriously shallow. They only hang around with the “cool kids” in the Space Marine army. This is why you see increased numbers of grav weapons in units such as Command Squads, Devastators and Centurions. Poor Scout Squads are denied access to grav weapons. Even though they are back at WS and BS 4, the grav race remembers when they were BS 3 and will not sully themselves with filthy Scout hands.

As powerful as the Graviton race has become, there is one foe that the fear above all others; the dreaded Orks! The greenskins are the scourge of the grav race. Their ridiculous armour saves make a mockery of the power of the Grav race and are the perfect counter to the Codex. Poor Codex: Grav players are forced to rely on their Space Marine Battle Brothers, as the Adeptus Astartes are forced to try and find any sort of counter to Orks in their threadbare codex. So effective was the Ork counter to grav, most Ork players decided to stop bringing their armies to tournaments. Sick of the top tables at most events being taken up by a sea of green, the Ork players decided to retire their top tier codex and allow the Eldar, Tau and Space Marines their moment to shine for once. That is why you so rarely see Orks at tournaments these days.

Codex: Grav is one of the more unusual ones in that it does not adhere to the force organization chart and only contains two unit choices (the Grav gun and Grav Cannon). Technically, the Grav pistol also exists, but it has never been observed in the wild. The Heavy Grav Cannon is also a thing, but I don’t have that codex, so it doesn’t exist to me.

Grav weaponry is quite cheap in terms of the overall army. Only the compulsory Space Marine unit cost stopped them from being spammed in much higher numbers than they are currently observed. They have quickly replaced the Plasma gun in the Space Marine arsenal. For some reason, a weapon that has a good chance of killing the wielder is not as popular as the Grav gun in the current meta.

The Grav gun prefers to be joined to units of Space Marine Bikes. As they are slightly cooler than Tactical Marines, Bike Squads are allowed the honour of accompanying two grav guns into battle, thanks to their rad motorcycles. This gives the grav guns some very good mobility on the battlefield and allows them to fire at full effect.

Grav guns also like to be in the company of Command Squads, but only if they promise to go in Drop Pods to get them closer to the enemy quicker. Grav guns will occasionally slum it with Tactical Marines, but only if no other option presents itself.

The Grav Cannon is a more powerful version of the Grav gun. It comes with a Grav Amp, giving it re-rolls to wound and against vehicles, making it even more ridiculously powerful. It is a compulsory upgrade for Devastators and Centurion Devastators, but for some reason is listed as an option in their respective codex entries. Centurions were the first unit allowed to accompany the Grav Cannon into battle and have been frequently observed on the battlefield. What are those things the Centurions are carrying?!?

Devastator Squads were only allowed the privilege of accompanying the Grav Cannon after they received an updated kit in 7th edition (the last one was so 2002!). For some reason, the kit only comes with two of the four compulsory Grav Cannons, but additional Grav Cannons can easily be purchased on the second hand market for a very reasonable $30 per cannon. The Devastator kit also comes with a number of other Heavy Weapons, but no-one has been able to recognise what they are for two editions now. The additional parts can still find use as battlefield debris or as a charitable donation to Astra Militarum regiments.

The Hunter’s Eye is an essential upgrade for the Grav army, granting Ignores Cover to one unit of grav weapons. This extremely rare and precious Relic is only observed in every single White Scars army.

The new Space Marine psychic power Null Zone has been created to lessen the effect of Invulnerable saves on Codex: Grav. However, the power is only -2 to invulnerable saves and does not ignore them, though this should be corrected in the 8th edition.

Codex: Grav can be added to almost all the formations in Codex: Space Marines and greatly benefit from their rules. The only ones it cannot be added to are the crappy ones made up of Terminators or vehicles, the ones that no-one takes anyway.

The Future of Grav

Just a note before I start, these rumours are obtained directly from the respective manufacturers and are 5000% accurate.

The Graviton race has experienced a remarkable rise to power in the short time since its release. Their rules and units are best used in synergy with other armies such as the Space Marines.