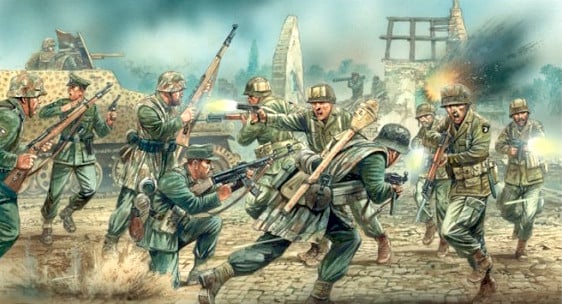 A new edition of the most popular 28mm WWII skirmish game and a new starter box are available for pre-order now! Player Feedback! We’ve listened carefully to the community and taken advantage of the thousands of battles you’ve played to improve the game in dozens of other ways. Keep your eyes peeled over the coming weeks to find out more! As you would expect we have a fantastic new figure specially made and FREE for those ordering the book direct from the Warlord Webstore: General George Smith Patton Jr. General George Smith Patton Jr. (November 11, 1885 – December 21, 1945) was a senior officer of the United States Army, who is perhaps best known for his ‘flamboyant’ leadership and the pair of Ivory handled Colt single-action Army .45 revolvers (1 later replaced with a 3 ½ inch Smith and Wesson .357 magnum). A perfect commander for your US armies, from the Mediterranean and on into the European Theaters in Bolt Action. This is a perfect time to start with Bolt Action – new rules, a great new starter set, and you can use all of your models in Konflikt ’47!