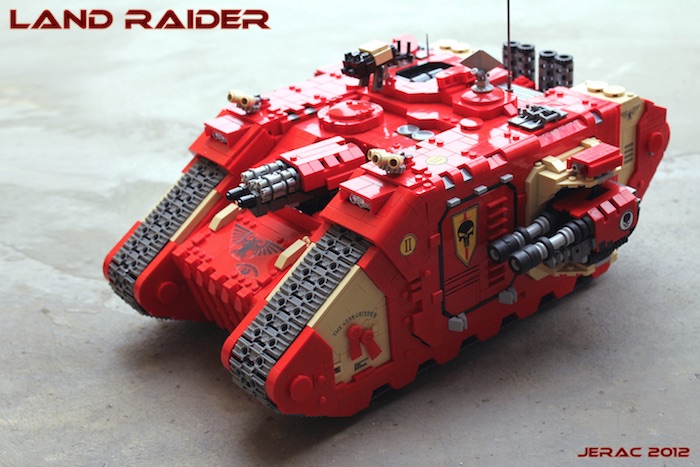 It’s AV14/14/14, fully motorized and ready to tankshock every minifig that gets in its way. Say hello to the LEGO Land Raider!

Jerac is a lego builder out of Poland with a penchant for 40K – he’s built Space Marine and Ork forces out of Lego. Including tanks – that Land Raider is not just awesome looking, it moves.

“The biggest, heaviest, most badass Power Functions – powered vehicle I have ever built. During the development this little beastie managed to grind through no less than sixteen gears, hence the nickname “The Gear Grinder”.  All turrets are rotated in both X and Y axises, with each function controlled by a single M-motor. This gives it a nice average of 1 motors per 3 functions, if not counting the drive system… which needs four XL motors to drive. Altough it was planned to have speed-increasing gearing, in the end I settled on 1:1 to give it a little more power, required to push chairs, roll over Ork bars and so on.”

To see the rest of his lego armies check out his Flickr page.

~I think I want this more than my car!