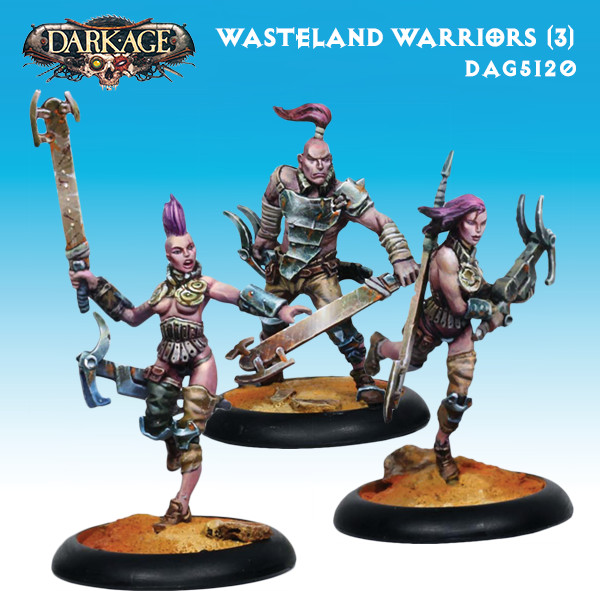 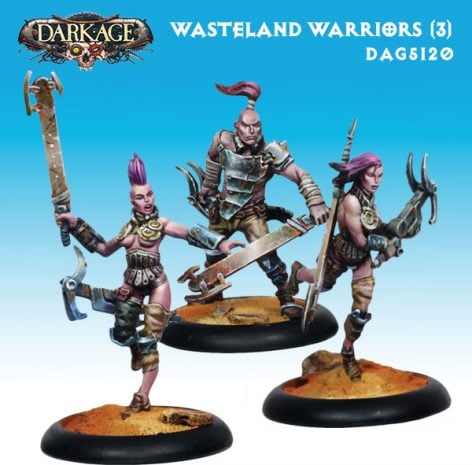 I’m back to talk about another Dark Age Faction. This time its the Outcasts,

The Outcasts are the fifth Dark Age faction I’ve written about. The others have had some storied history or unifying origin that defines them. The Outcasts… not so much. While there are those among them that are defined by a cultural past, the faction as a whole represents individuals that don’t fit in with Samaria’s largest human society, the Forsaken. Many simply cannot tolerate the Forsaken’s harsh religious laws. Others may have been born outside of them. For the hulking Brutes, becoming Outcasts is the only option. Their genetically enhanced stature makes them abominations to the Forsaken. 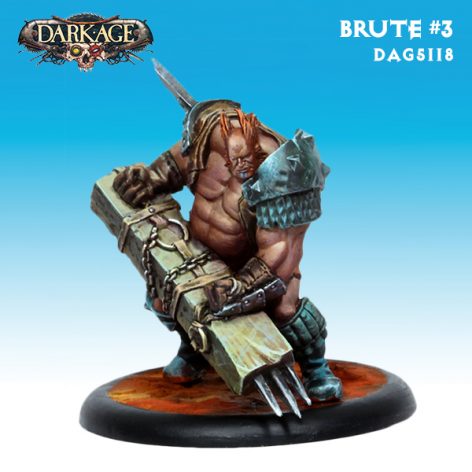 Outcasts survive largely on herd animals called turrip; creatures adapted to the harsh conditions of the planet. Outcast equipment is scavenged from the decaying pre-collapse settlements that dot the land and much of it is cobbled together from scrap. Life for the Outcasts is harsh, but this only ensures that they are a tough people, ready to handle whatever Samaria can throw at them. Theft and banditry is a way of life, and only the strongest survive. 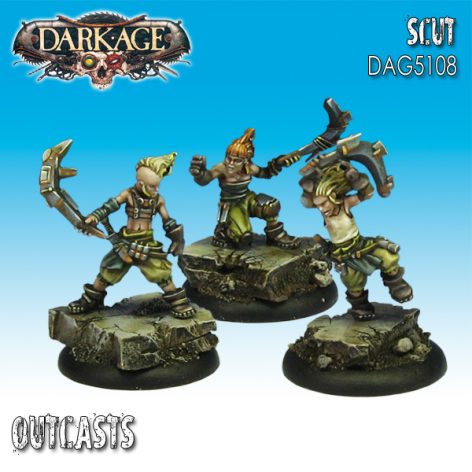 Outcast players currently have three choices on how to play the faction. There are two subfactions to choose from, or you can simply remain unaligned. Unaligned Outcasts are representative of most of the Outcast population of Samaria. The core troops of such a force will be Wasteland Warriors and Scuts. Wasteland Warriors are relatively inexpensive and have predictably mediocre stats. Their greatest tactical strength is probably their Zip Guns, which can drag models towards them. Scuts are some of the cheapest models in the game with a statline that is simply appaling. But like the Wasteland Warriors they have a dirty trick. Their boomerangs have the Whiplash special ability which can essentially steal enemy model’s AP.

While these two troops are decent enough on their own, its actually not too difficult to make them even better. Unaligned Outcasts revolve around the Scavenge mechanic, picking up the scrap left behind by destroyed models, and using it to enhance their own armor and weaponry. Wasteland Warriors and some other troops even have the ability to Scavenge from objectives, giving them the ability to bulk up quickly. While Scavenge is undeniably strong on troops, it can turn more elite Outcast models into true monsters. A Warchief, Manhunter, or Oz Pit Champion maxed out with three scrap counters are pretty scary for the relatively moderate price of 100 points. If you don’t align your Outcasts with a subfaction, you can pick a model to get a Scavenge counter at the start of each turn, making it easier to get everyone loaded up. Here’s a link to the Outcasts Faction Document so you can read more about how it works. 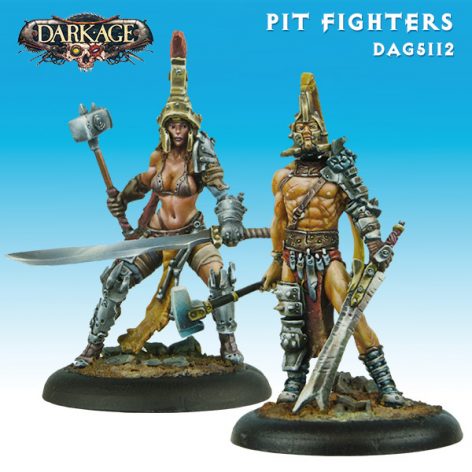 Generic Outcasts have some more unusual troops as well. There are of course the Brutes. These guys don’t Scavenge, but hit hard right off the bat to compensate. Mongo, Guardian of the Tribe is a character Brute, and is not only one of my favorite Dark Age models, but is one of the hardest hitters in the game. Outcasts can also take Pit Fighters, ferocious melee troops with a post-apocalyptic gladiator feel to them. Then there’s Happy Hour, a bartender with a bionic arm who will get your troops loaded and fighting strong. Here’s a link to all the unaligned Outcast cards so you can check them out for yourself. 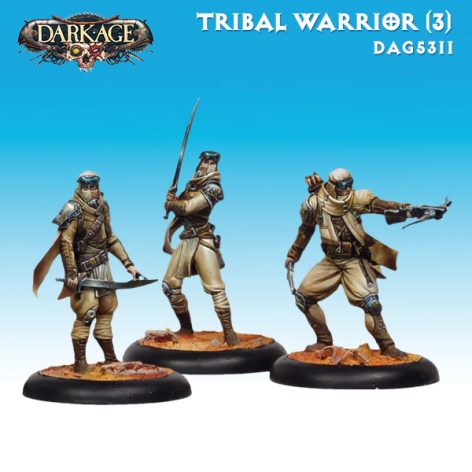 If you’re more into subfactions, you can try the Salt Nomads. These Outcasts split off from the rest of the humans on Samaria right around the time of the Collapse. They followed religious prophet Zebadia Stane seeking a fabled land of milk and honey. The raving Stane saw the wastes of the Salt Flats as the final test between his followers and this imagined paradise. They would of course never find it. Instead they defied the odds and adapted to the harshest region on the continent, learning to dig deep wells, and hunt the monstrous beasts that lived there. Disputes between tribes are common, and other threats such as those from the Skarrd, ensure no Salt Nomad lasts long without learning to fight.

A salt Nomad force can take any unaligned Outcast model, but will lose the Scavengers of the Wasteland Rule. Instead they gain the Honor of the Tribe rule giving them Vengeance Tokens when friendly models are killed. These can be spent to give temporary buffs to any model in the force. Some models can also generate their own Vengeance counters through various means. 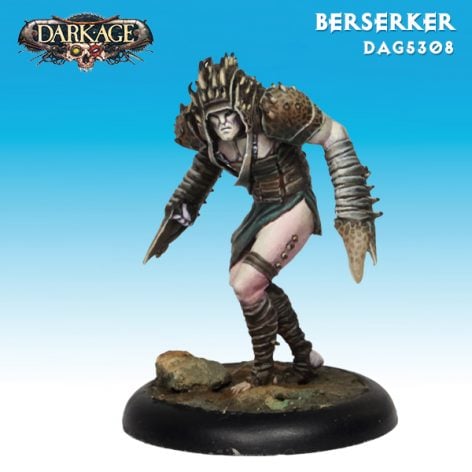 Most salt Nomads have relatively low PW weapons, but can apply various counters to their foes. Their Tribal Warriors are quite similar to Wasteland Warriors (they even have the Scavenge ability) but apply Toxic counters rather than drag models. Thornwinds place Bleed Counters, Hands of war apply Immobilize Counters and so on. Meanwhile there are a few Salt Nomads like the Moloki, Beserker, and Moonless Night that can hit very hard indeed. These models will do the heavy lifting while the rest of your force debuffs everything in sight. Here’s a link to the Salt Nomad cards so you can check them out for yourself. 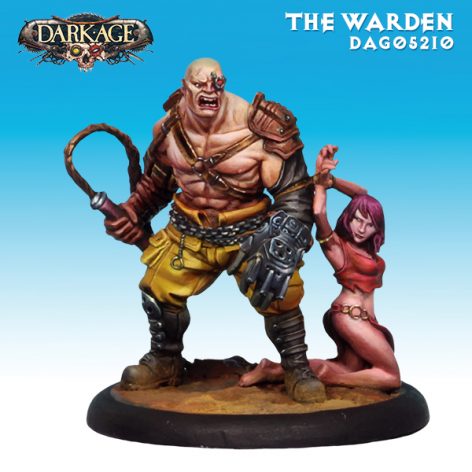 The other Outcast Subfaction is the Slavers of Chains Barrow. Given how brutal life is on Samaria, it shouldn’t come as a surprise that slavery is a thriving institution. The trade centers around the Warden of Chains Barrow, who has created a small empire for himself around the vile institution. His skills of subjugation are so great that his slaves will put their lives on the line, fighting his enemies in exchange for the possibility of better treatment, perhaps even freedom. 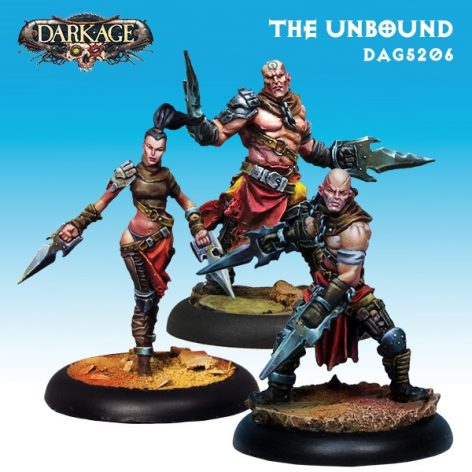 As with the other Outcasts, Slaver strategy centers around counters. With these guys, its panic counters. Many Slaver weapons will cause their foes to gain panic counters. Some have the Victimize ability which will place one of these counters on a hit, while others have Horrible Death which will place Panic Counters on all enemies within 4 inches if an enemy is killed. Panic counters are already bad, increasing an enemy’s DEF (remember low DEF is good in this game) and subtracting from their AS and PS. But that alone isn’t good enough for the slavers. Many of them have the Sadistic ability which means they hit enemies with Panic Counters even harder. Don’t think models like the CORE will be getting off easy either. The Slaver Subfaction’s special rule is that they can place Panic Counters on any model.

They can keep stacking the bonuses even higher with models like the Coffersman who can mark a single enemy for Death. The Chain Gang will also do their part with the Distraction ability. There are even some Slavers with Scavenge. With all the buffs and debuffs tallied, even basic Slaver models can put the hurt on the toughest enemies. The tricky part will be getting everything stacked in your favor before all your slavers are dead. Here is a link to the Slaver cards. 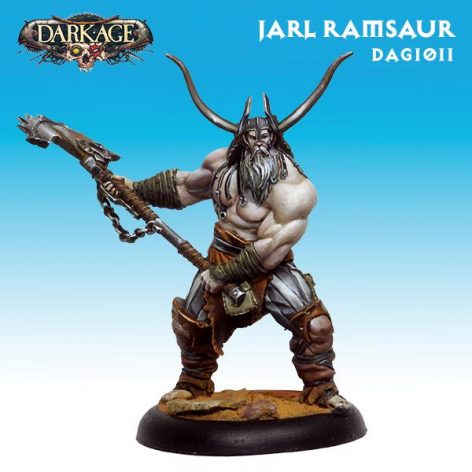 One last thing worth mentioning is that the Outcasts can hire Bounty Hunters to augment their own troops. Each of these can add a lot of character, and a bunch of useful abilities to your force. Some, like Cesspool, are included in most competitive lists. The truth is these guys probably deserve their own article. Here is a link to their cards.

~Hope you enjoyed the article. CORE are next! What’s your favorite way to play outcasts?