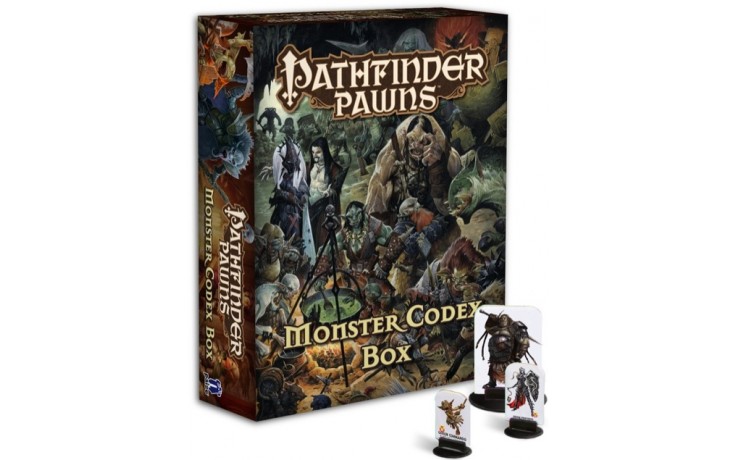 Are you in desperate need of monsters to challenge your Heroes in a RPG campaign? Paizo has just the tool box you’re looking for!

The Pathfinder Pawns Monster Codex box is a strange product at first glance. “Why the heck would I need a bunch of punch out monsters for my RPG campaign?” Well, if you find yourself asking that question you probably run your own campaign…yet.

If you’re like me, you already have a ton of miniatures but you never seem to have “the right” miniature for an encounter you want to run. Or maybe you do, but it’s just buried under a ton of other plastic miniatures in a tub somewhere and you don’t even want to dig though it to find it. I feel your pain because I’ve been there. Back when D&D and Paizo got with WizKids to make those pre-painted packs my friends bought a bunch of them just to have the extra miniatures. They worked great because they were (relatively) cheap, plastic and pre-painted. I have played many-a-game with our mishmash collection of figures and I wouldn’t have thought there was any thing wrong with that – until I took a look at this product and the lights turns on in my head.

One of the problems I’ve always seen pop up was never having enough of a certain type of monster. For example, I was playing in a game and we happened across an Orc patrol. To represent the Orcs from the encounter I think we ended up using a bunch of Ghouls from another game system. And you know it worked find mechanically – but if we had these standees then we could of had “accurate” pictures of what we were fighting. It’s just one more thing to help with the immersion when playing; They are a great “nice-to-have” tool to play with.

The box contains over 200 different monsters divided into handy sections. This helps with organization and really the card board punch-outs will pop back into place when you’re done. You could store all of these with the rest of your books as the box doesn’t take up a ton of space. For me, that’s a much cleaner option than a literal tub of plastic miniatures.

The art work for the standees are direct copies from the Pathfinder books so you know it’s going to look good on the table. Now these probably won’t replace your miniatures for your characters but they will certainly enhance your monster pool that you can draw from. You can also order more plastic stands direct from Paizo if you need them but you get a good amount in the box. Overall, if you’re a DM and are looking for a cost-effective way to get a ton of monsters that won’t take up a ton of space AND look good, well, I can’t recommend the Monster Codex Box hard enough. If you’re a player in a RPG game and you want to thank your DM, go get them one of these boxes – seriously! Heck, at some point you’ll probably be fighting against these monsters so it’s really a gift for you, too. 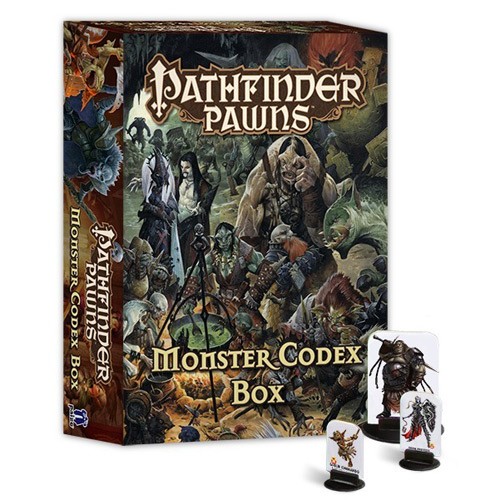 The fiercest surprises often come from the most familiar foes! The hordes of organized and intelligent monsters presented in the Pathfinder RPG Monster Codex come to terrifying life on your tabletop with this box-busting collection of over 200 character pawns to use with the Pathfinder RPG or any tabletop fantasy roleplaying game. Printed on sturdy cardstock, each pawn contains a beautiful full-color image of a character from the Monster Codex, and slots into a size-appropriate plastic base, making it easy to use in play alongside traditional metal or plastic miniatures. With multiple pawns of the most useful monsters, allowing you to create the encounters from the Monster Codex‘s encounter groups, the Monster Codex Pawn Box is the best way to ensure you’ve got the right monsters to push your Pathfinder game to the next level!

Nothing says “Thanks for running the game” like a box full of monsters!