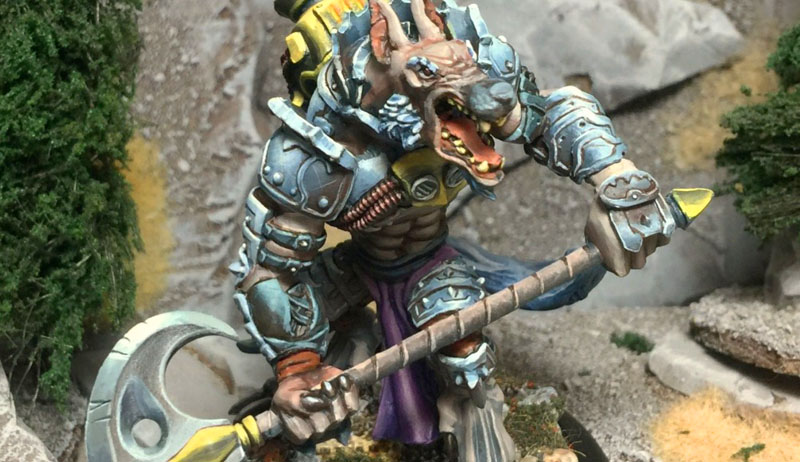 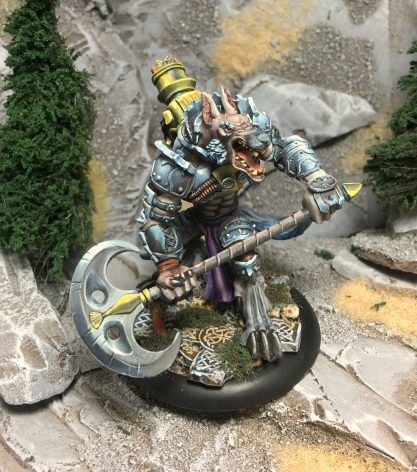 I’ve finally started painting my Goritsi army for Wrath of Kings, and I snapped some pics of my progress on this Shield Breaker. 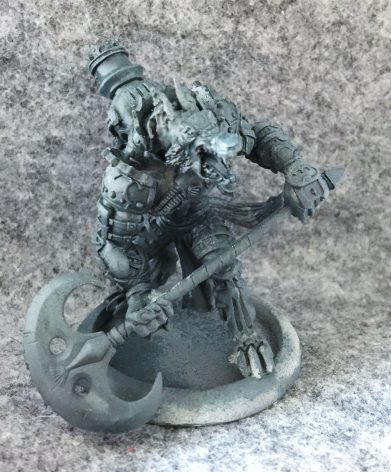 This blue base coat was the start of what was supposed to be my first airbrushing project. Unfortunately my airbrush wasn’t atomizing properly. I shouldn’t have gone with that cheap compressor. So, this ended up being a traditional brush project using my preferred method: wet blending. If you haven’t tried much wet blending, big models like this are a great place to start to learn that skill. The large surface area is much more forgiving than with tiny 28mm humans. My Mountain King was the first model I really began mastering the technique with. 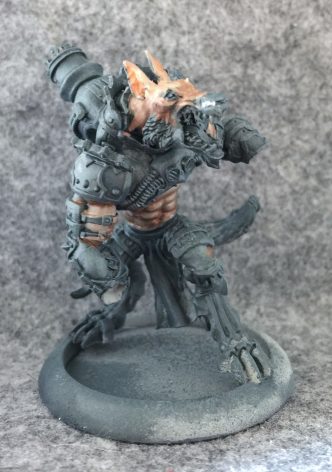 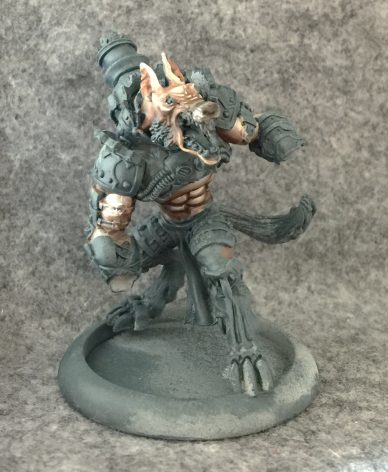 Here I’ve added further definition to my base, and added some Menoth White Highlight to the Trollblood to add some more brightness. The nose was given a basecoat of Thamar Black mixed with just a bit Bloodstone (an earthy orange color), then highlighted with some pale Underbelly Blue. 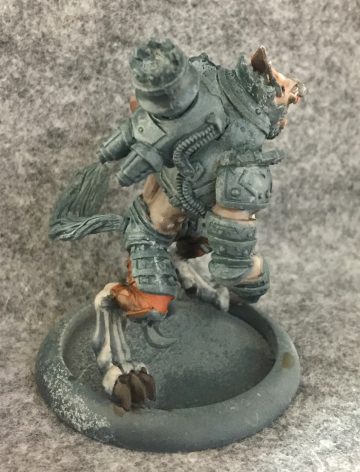 Because animals usually have variations in fur color throughout their bodes, I go for a slightly different mix for his lower legs. I kept the Trollblood highlight, but shaded it with a mix of Thamar Black and Exile Blue. Then I moved on to his pants. For these I used Bloodstone shaded with a green toned black mixed from Thamar Black, Green Ink, and Ordic Olive. 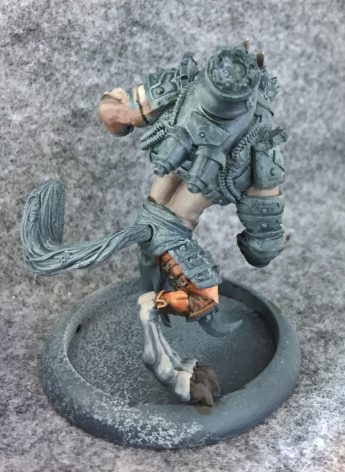 I finished them off with further highlights adding some Menoth White Highlight to the Bloodstone. I used this mix to add some definition to the hem and I also outlined the recesses of the piece with same olive/black mix. 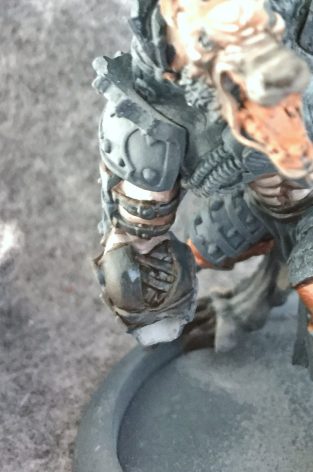 There are plenty of other leather areas on the model, and for these I want to go with a blue/black look. The base is a black with a little added Bloodstone and Red Ink to give it a warm tone. I begin highlighting this with bluish Coal Black. 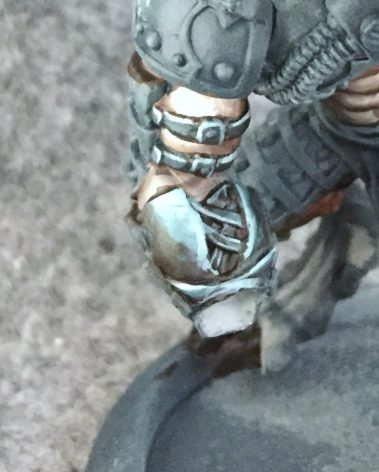 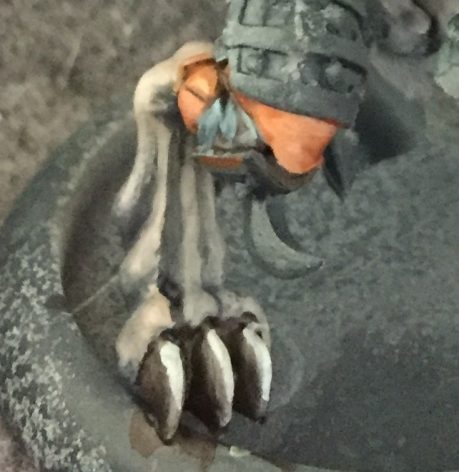 The claws were highlighted with the same pallet – minus the Coal Black. 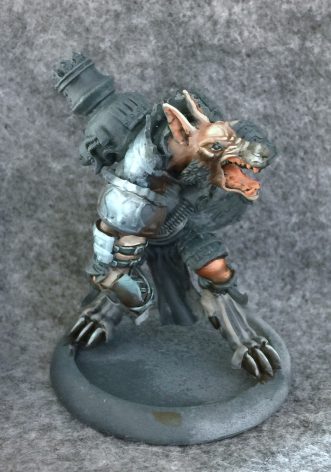 Next I decided to move on to the armor. I’m always trying new mixes for NMM, and this time was no different. My midtone was Greatcoat Gray mixed with a healthy amount of Cygnar Blue Highlight to add some color. This was shaded with Umbral Umber and highlighted up to a nice apex; first with Underbelly Blue, then with Menoth White Highlight used at the highest points in certain areas to represent a bright reflection. 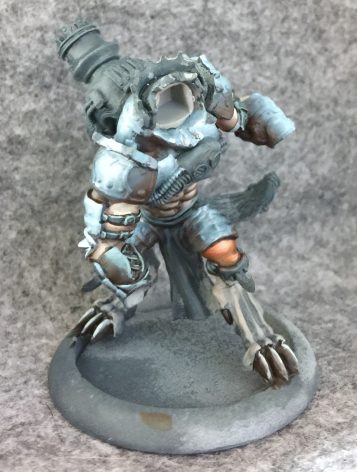 I keep at it until I have this mix nicely blended over all parts of the armor. 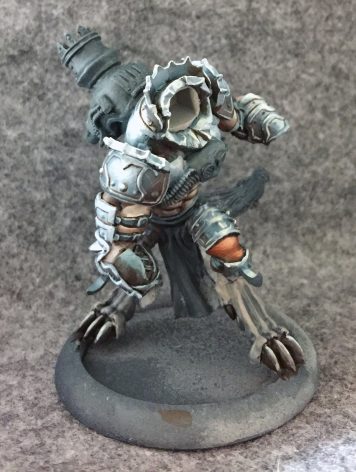 The next step was one of the most tedious. I added a little thin line of highlight along the edge of every armor plate. There are actually multiple tones in all used for these highlight lines since they are not all the same value. Some have to be lighter or darker or they will contrast too much with the surrounding area. The darkest of these lines use Underbelly Blue darkened with just a bit of the Greacoat/Cygnar blue mix used in the original basecoat of the armor. The brightest are of course Menoth White Highlight. 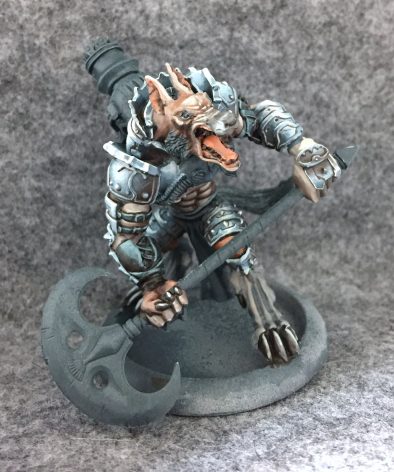 All the armor plares are then defined further by adding a thin line of Umbral Umber to the crevices. 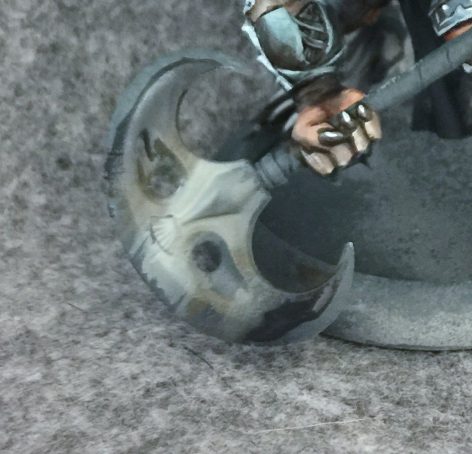 Here are some of the first blends on the spade. I used a slightly different mix for this weapon, although it is fairly hard to tell now that the project is finished. 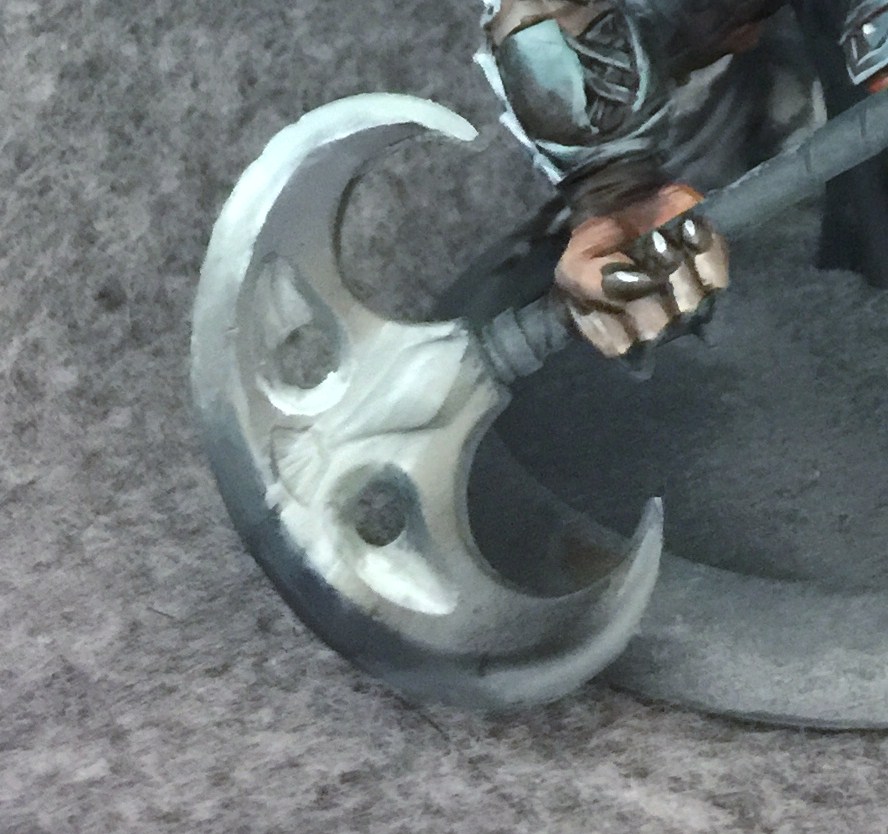 The midtone here is Thornwood Green, which is really more of a warm gray. This is is highlighted with Frostbite, and shaded with a dark navy color I made mixing Umbral Umber and Exile Blue. 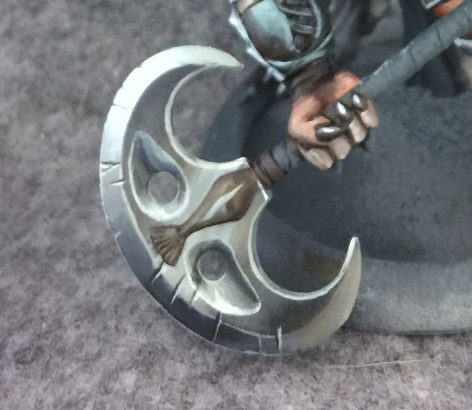 I added more layers of the same blends to clean everything up while also adding more lines of highlights aling the ridges. It was difficult to get the reflections right in the concave indentions, and I’m still not sure it looks quite right. 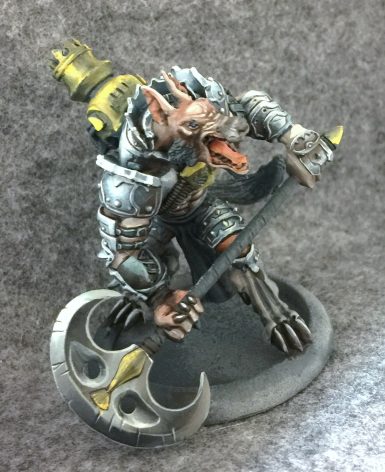 Still more metal to go. Now it’s the brass on the boiler and some other areas. These were done with a base of Cryx Bane Base highlighted with Sulfuric Yellow. 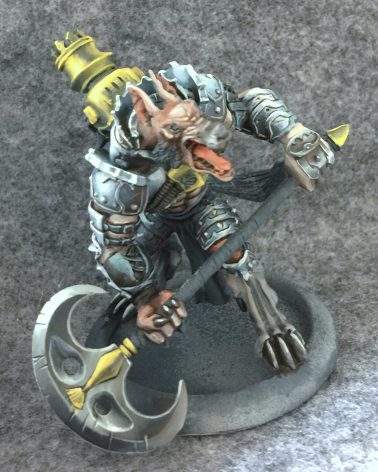 After some more layering of the same, I get it cleaned up and a lot smoother looking. 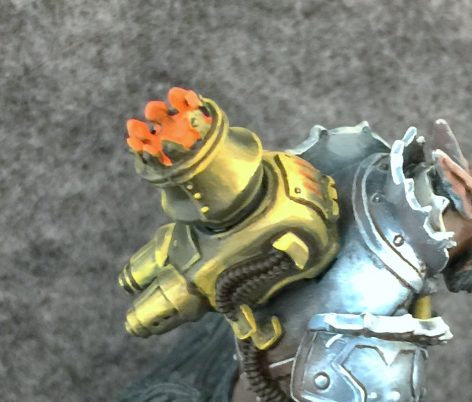 Here’s a shot at the back. For the lining, as well as a few other dark areas, I used a warm toned black again. It’s the same Thamar /Bloodstone/Red Ink mix again. I also used this color to basecoat the tubes. The interior of the smoke stack was painted with Khador Red Highlight to start off a fire glow. Later I blended in some Cygnus Yellow to really give it a “glow.” 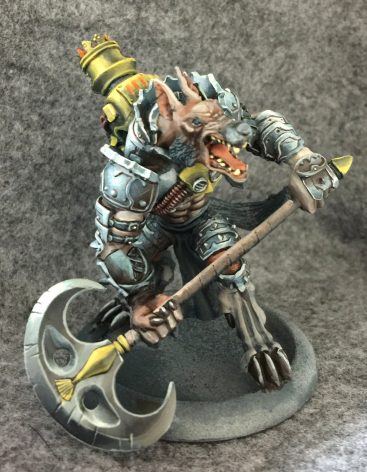 Now let’s go back to those tubes we were just looking at. I gently drybrushed some Sanguine Highlight (this is actually a deep red more than what I would consider a highlight) along the tubes, followed by some rucksack tan, then more of my favorite Menoth White Highlight. The end result is a bit copper-y in appearance. Not exactly what I was going for but it works fine.

I also begin the leather straps on the spade shaft. I started with an Umbral Umber Basecoat which was highlighted with Ryn Flesh and shaded with the green-toned black I was using earler. 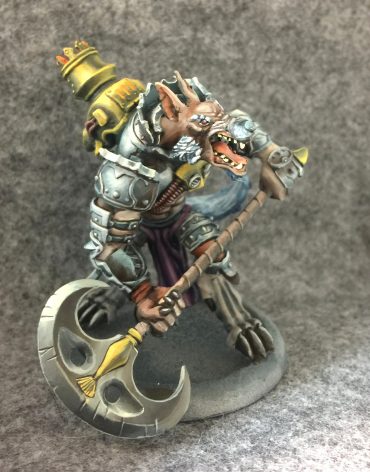 I added line highlights to the leather strips on the spade with Ryn Flesh, then lined the area in between with the green-toned black. The fur on his jowls and eyebrows was one of the last things to complete. This began with Underbelly Blue with a big glob of Exile Blue blended in to the bottom for shading. Then, each little fur clump was picked out with Underbelly Blue then given a final little highlight of pure Morrow White. The tail was done in a similar manner. That tail has a number of interesting  little charms and jewels inserted throughout, but I just didn’t have the patience at this point to finish them. If you own this model, and were hoping to see how I painted them – sorry! After that it was just his eyes. I had already based them with the red-toned black earlier. Next I ran a thin line of red along the bottom of each, before adding a spot of highlight with – you guessed it – Menoth White Highlight.

The base is one of CMON’s own. One of the graveyard ones if it wasn’t obvious. I guess looking at him now, that shiny armor I worked so hard on might feel a little too… bright. He’s almost like some wolf paladin. I guess it doesn’t really bother me since Goritsi isn’t an “evil” faction. That’s one of the cooler things about Wrath of Kings. All the factions are very human with good and evil characters found in all of them. 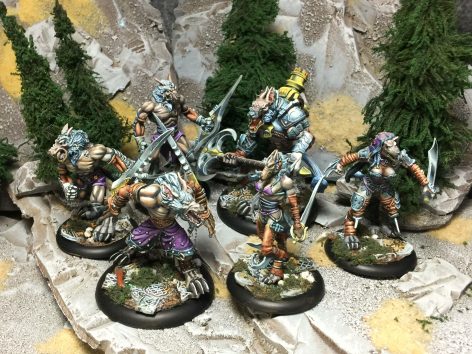 Here he is with the rest of his Werewolf pals from Honor and Treachery: the Wrath of Kings 2-player starter. While I do plan to paint the Nasier models from this set as well, I want to finish up more Goritsi first and get a nice big Battle size army together. My next step is to paint up my Goritsi Starter to get me closer to that goal.

~Hope you enjoyed the article! Who else out there is a fan of werewolves?

Author: Ben Williams
Ben Willimans is a Professional Painter and Columnist at Bell of Lost Souls. He has been involved in the hobby and art side of miniatures and the tabletop gaming industry for over 20 years. He has won multiple national painting awards.
Advertisement
CoolMiniOrNot Game Tutorial Hobby Miniatures Painting Wrath of Kings
Advertisement