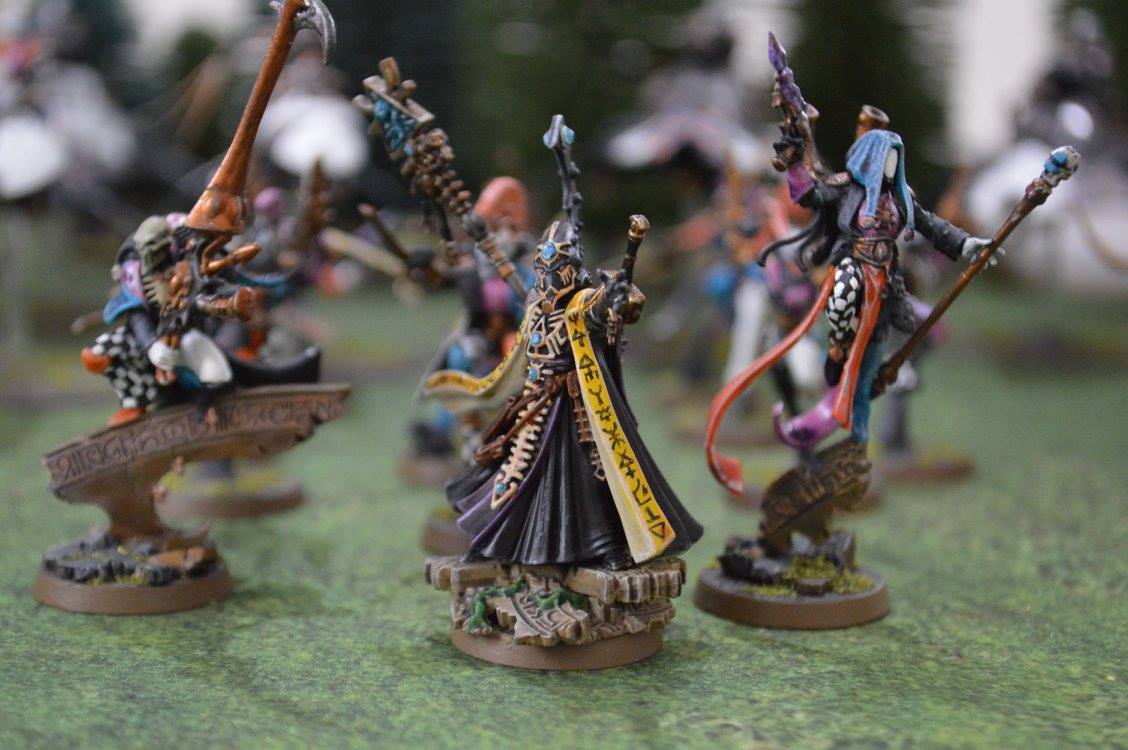 “He who sees his own doom can better avoid its path. He who sees the doom of others can deliver it.” Eldrad Ulthran

Sepulchral darkness rent the actinic lightning, the ozone afterbirth of every strobing flash stung the eyes, the very air hummed with barely contained power set…ting ones hair on end. The power of matters unmaking, its rude shunting through the turbulent warp and its final and violent reassembling in a far away distant place. Teleportation. Amongst the rarest of all archeo-tech. Its powers and processes unfathomable to all but a select few in the priesthood of Mars. It was enough to strike awe and terror into the average imperial citizen, but the beings standing on the quad teleportarium dais were, if anything, even more awesome and terrible than even this most arcane science. Over two score of beetle black Astartes leapt out of the surrounding gloom with every arcing discharge of electricity, standing as still as statues, weapons held ready at their breastplates, menacing in their stillness, a promise of violence barely contained by the most stoic discipline.
His face illuminated by the acid-green glow being given off by the tactical readout displays that blistered profusely from the strategiums servitors blocky mechanical torso, Watch Captain Bandon’s brow furrowed as he studied the tactical runes. a full forty six of the Emperor’s very finest waited on his command to unleash all hell on their target. But Bandon was troubled, part of him wanted to order the attack immediately to relieve the noble Sons of Sanguinius that even now fought and died amongst the xenos wraith-groves. That Astartes blood should be spilt by arrogant Eldar whilst he watched on was almost too much to bear, that one of those Astartes was a former comrade returned to his chapter… He set his jaw and remembered the mission.
Sensini had been a Watch Captain himself when he had served the long watch, he would understand. Would he though? Would he understand that he and his men were bait? Bait for one of the greatest targets in all the Ordo Xenos’ kill-dossiers? He would have to. The greatest witch of Eldar-kind was coming for Sensini, perhaps in vengeance for his collapsing of the Ormenis IV webway branch, perhaps for whatever secrets he had learnt in his kill teams four year odyssey as they fought their way back to realspace through the xenos twilight dimension. It mattered not. The Eldar were capricious and too fathom their reasons invited madness.
The runes that marked out the Eldar started moving, quickly, lithely. Aftery toying with the Blood Angels they were now moving in for the kill. Amongst the runes was one that caught Bandon’s attention. THERE! Unmistakable! Eldrad Ulthran himself had taken the field. “Now!” he roared. The arcane generators whine began to intensify to a nearly unbearable pitch and with a sound like tearing silk and a flash of un-light three of the four dais stood empty. “Report!”
“Partial malfunction of teleportarium array my lord, other ground units transited with minimal deviation. It’ll take five minutes for the teleportariums generators to spool up to capacity again.” stammered the tech adept at the control pulpit.
“Five minutes? The battle will be over in half that! Get me and my kill team down there NOW! Bandon roared the last word and the tech adept visably cowered. “I’ll… I’ll try and re-route auxillary…”
“I dont care what, just do it!” His men were fighting and dying without him against one of the most powerful witches in the entire galaxy and all he could do was boom at some lowly adept who’d barely had his first mechadendrite installed. He willed himself to redirect his wrath, he would satiate it with xenos blood.
“Auxillary power re-rooted! We can…”
“DO IT -NOW!”
An explosive bang marked the kill team’s departure. The tech adept sighed in relief. He almost pitied whatever the Astartes were killing. Almost.

Ok guys, the wait is FINALLY over! Apologies, but it’s been quite stressful these past few weeks, hosting our No Retreat 3 event. But here we have it, Harlequins Vs Deathwatch, on this beautiful board created by Wargame Terrain Factory (created for our No Retreat events). I highly recommend you check them out if you are interested in purchasing some awesome terrain. The Deathwatch were also recently finished, painted by KB Studios, check them out too if you are interested in getting your minis painted. Julian from the SN team was also given a modest three days to assemble and paint Eldrad so that we could create this report for you. Well that’s enough rambling from me. Let’s get this game started!

For this scenario the Blood Angels are deployed at the centre of the board surrounding the “relic”. If they are able to escort him off their own table half the Deathwatch/Blood Angels would gain an additional 5 points to their Kill point total. 3 points bonus would be added to either sides kill points to whoever is capturing him as a regular objective.

Steven deploys his Deathwatch bikers along the flank to interfere with any Harlequins who might be trying to do the very same.

The Dreadnought and Vanguard Veterans are positioned at the centre so that they can offer some immediate support to the Blood Angels. The remainder of the Deathwatch forces are held in deep strike reserves.

Julian counters the Deathwatch Bikers flank with a deadly unit of caress-armed Troupes within a Starweaver. Who will be able to claim hold of the eastern flank, time will tell.

Eldrad sets himself up at the centre of the deployment zone with his sight set firmly on taking hold of the Blood Angel Captain. He is attached to the Cast of Players formation which in turn is also granting him crusader for the extra movement when they run.

Thanks to Eldrad’s warlord trait, the Harlequins were able to grant scout to their eastern flank and thus, secure an early advantage there. He also failed to steal the initiative and so it’s over to Deathwatch’s turn 1! I’m so excited!!! this looks awesome!!!

Turn 1 (Deathwatch) Steven advances his bikes in the hope to kill one of the units in rapid fire range for first blood.

Turn 1 (Deathwatch) The rest of Steven’s forces move up to protect the Blood Angels who are falling back with the objective. The Harlequins will have to react quickly if they are to stop Sensini from being escorted off the board.

Turn 1 (Deathwatch) The bikers fire their bolters at the Skyweavers, and despite having 2 wounds each, Julian still managed to whiff all of his rolls to give the marines First Blood! The Dreadnought also shot at the unit with Eldrad in it and was able to kill 3 players and insta-kill their Troupe Master! Suffer not the alien!

Turn 1 (Harlequins) The Troupes armed with Caresses spring out of their Starweaver, laughing psychotically, ready to take revenge on their fellow Harlequins who perished moments before.

Turn 1 (Harlequins) The remaining forces hurtle themselves towards the enemy at full pace as they are aware that time is ticking. They must hurry if they are going to have a chance at stopping the Blood Angels from evacuating.

Turn 1 (Harlequins) Eldrad successfully casts fortune on himself and his unit, while also dooming the Blood Angels.

Turn 1 (Harlequins) With the unit doomed, the Voidweavers were able to kill six members of the unit with their prism blasts and shuriken cannons.

Turn 1 (Harlequins) Eldrad and his unit were able to grant the adjacent Troupe unit crusader. Thus giving both units an extra three inches to their run moves. All the more important to get in combat early, as they wouldn’t survive very long exposed in the open.

Turn 1 (Harlequins) The Troupes fire their shuriken pistols , and thanks to bladestorm, took out two of the bikers quite comfortably.

Turn 1 (Harlequins) The Skyweavers fire their blasts at the Dreadnought, knocking off two of it’s hull points while also taking out another Blood Angel.

Turn 1 (Harlequins) Eldrad and the two units of Troupes run aggressively to close the gap between them and the Deathwatch (or perhaps they were being suicidal, we have yet to see)

Turn 1 (Harlequins) Julian charges the bikers and a tidal wave of caress attacks proved too much for them to survive. (Note: We are aware that charges from scouting units is illegal, although there is some debate whether the unit in the transport are also affected by the same rule. Despite all that it was a genuine oversight from Julian)

Turn 2 (Deathwatch) Steven G gets most of his reserves rolls and deepstrikes close to Eldrad. This does not bode well with the Harlequins as they are within rapid fire range.

Turn 2 (Deathwatch) Another of the units deepstrikes next to the Troupes who wipes out the bikers. Another act of revenge on the eastern flank.

Turn 2 (Deathwatch) Steven G moves his significantly damaged Dreadnought towards Eldrad. Can Eldrad survive the impending doom staring him in the face.

Turn 2 (Deathwatch) The Vanguard Veterans launch themselves ahead so that they may wreck havoc on the Harlequins deployment area. 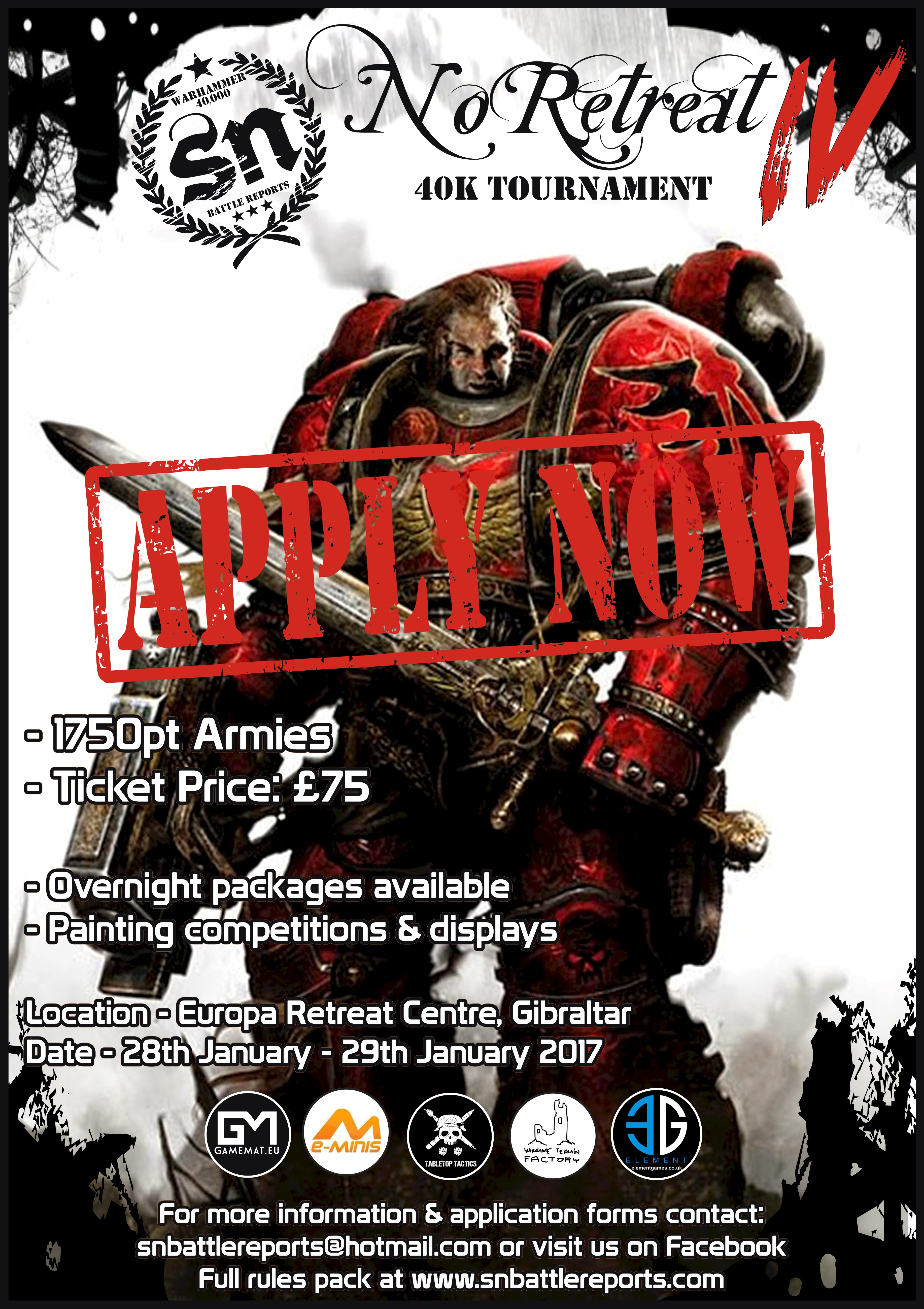 Author: Steven Pardo
Steven is a Gibraltar-based veteran tabletop wargamer with over 10 years of experience. He is the man behind SN Battle Reports. His specialty is organizing Warhammer 40K narrative events. He began writing for BoLS in 2015.
Advertisement
Armylists Battle Reports Deathwatch Eldar Warhammer 40k
Advertisement