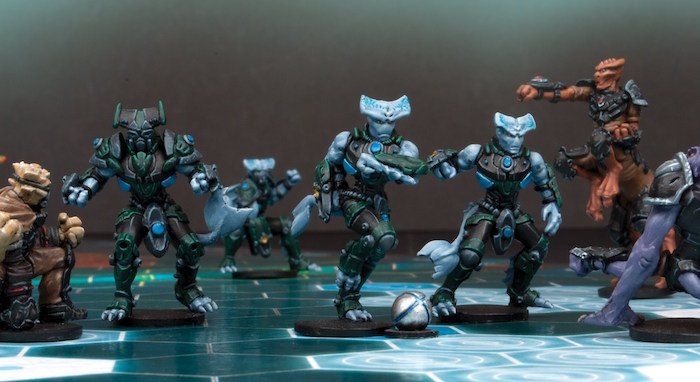 Mantic has some new teams for you to try out on the arena.

The DreadBall Rules Committee is proud to present the second release in the multi-phase public beta for DreadBall 2.0. We’re listening to any and all feedback we get from playtesters from all over the world. This week we are releasing another five teams for public comment. Again, if you don’t have or play any of the teams currently released, please feel free to test them out by using proxies!

If you’re interested in helping us in our playtesting, be sure to download and print some surveys. Fill them out during/after your games and then go to our online survey and tell us about your games. There seems to be a bit of confusion regarding the way Captains work in their current iteration. We will re-write this section to make this clearer, but Captains are designed to be purchased in Leagues or Exhibition matches. A Player does not gain advances to become the captain, but rather, each Captain is purchased and added to the roster like a normal Player. Additionally, each Captain has a set role and predetermined stats/abilities.

As an example, the Marauder team’s Captain is listed as a Striker and therefore counts as a Striker in all such rules (lower Armor, bonus on Agility/Speed/Skill rolls, etc.). In addition to being the only way for a Marauder team to have access to a Striker, this model also starts out with the ‘A Safe Pair of Hands’ ability. However, a team may only purchase such a model in a League or in an Exhibition Match (which will be covered in more depth in future release packets). Finally, because the Captain is the face and leader of the team, a team may only purchase a single such individual at a time. Adding to the previous release, there are now 11 teams available for players to test, and we want to hear how all of them interact with each other and the core rules on the tabletop. We ask that Coaches that wish to participate in playtesting limit themselves to those teams that have already been released, as well as this week’s teams:

As you can see, in addition to the updated rules of some older teams, we have decided to show off some of the work done for the newly funded starter box teams. We’re especially interested in seeing what everyone thinks of these teams.

~Play some games and let Mantic know what you think of them by filling out this dedicated survey, or sharing your thoughts on the Mantic Forums.