Infinity: Starting US Ariadna on a Budget

Thinking of starting US Ariadna or a budget way to get into Infinity? There’s no better place to start the US Ariadna Army Box!

This list is designed to be as cheap as possible for new players to get into the faction, using all the contents of the army box. While not completely optimised for ITS missions, it does provide a nice variety of units and skills to learn. A follow up article will examine an ITS optimised list without worrying about budget. 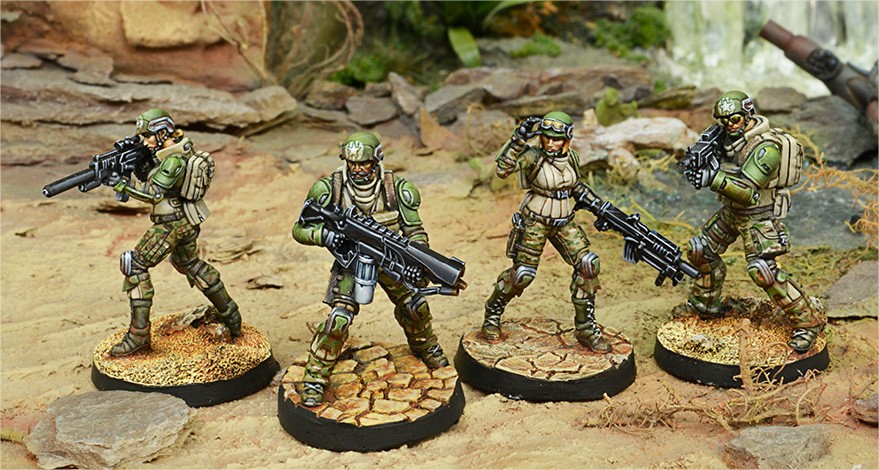 Grunts are ridiculously good value and form the core of most US Ariadna lists. Their claim to fame is having 3 armour (the same as some Heavy Infantry), for 10 points…yes you read that right, 10 points! Having a full link team in cover provides a cheap long ranged fire base with 6 armour (+3 from cover) and Sixth Sense L2 providing protection against Surprise Shot enemies, flankers and Airborne Deployment troops that manage to get behind them.

The above load out gives them a strong ARO presence with a Sniper Rifle and offensive power in the active turn provided by the HMG. The sniper Grunt also has the Marksmanship Level X skill, allowing him to reduce his weapon’s burst to 1 in the active turn in exchange for receiving a +6 mod to his BS. While it’s not preferable in most situations, in a pinch it can help remove enemies with TO Camouflage, effectively nullifying the modifiers to hit them. 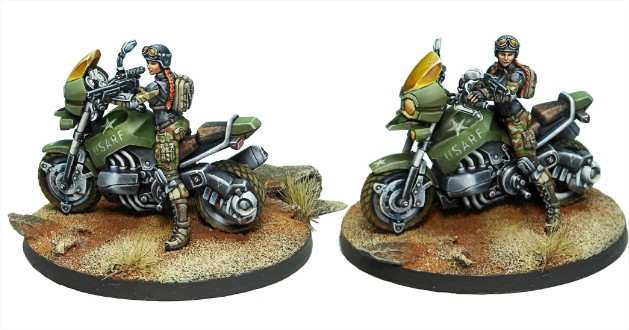 Coupled with the Devil Dog Team the Maverick forms a fast moving flanking threat that your opponent can’t ignore.  On top of the toolbox of weapons that cover multiple range bands, the Maverick also has MSV 1 and 8-4 movement.

In this list the Maverick is there to fly up a flank and harass priority targets with the Light Rocket Launcher. But with its MSV 1, Submachine Gun and Smoke Grenade Launcher it can also eliminate the enemy’s midfield camo specialists or provide smoke to let your own specialists complete their objectives.

Another thing to note is their high armour of 3, which is unusual for a bike mounted unit. Paired with a Submachine Gun that can utilise Suppressive Fire, the Maverick can be surprisingly difficult to remove. Another viable tactic is to use the Maverick’s high movement to get them wherever they are going to be most annoying for your enemy and dig in. 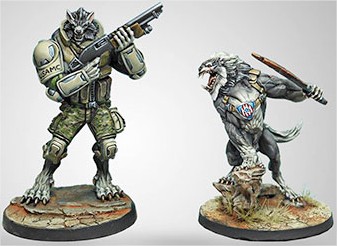 The Devil Dog Team consists of 2 models, the Devil Dog itself and a G: Synchronised K-9 Antipode, introducing a good dose of werewolf to this list.  This team is there to surprise the enemy, attacking from angles and at speeds they don’t expect.

Both models are Irregular and Extremely Impetuous. While you won’t have too much control over where they run, they will get there extremely quickly! Their biggest advantage is the Super Jump skill which often provides opportunities to catch your opponent off guard.

Super Jump allows them to jump over terrain, closing in on enemies much quicker than expected, and they can also jump on to rooftops to attack snipers or hidden lieutenants the opponent thought was well out of harm’s way. Being able to attack from non-traditional angles and make use of the vertical nature of Infinity terrain is a massive advantage.

Another role for the team is camo token hunting. In a nice fluffy rule the Antipode has Sensor (or a really good sense of smell), automatically revealing camo tokens in its zone of control. The Devil Dog’s smoke grenades then allow it to jump into close combat unharmed to finish its prey. 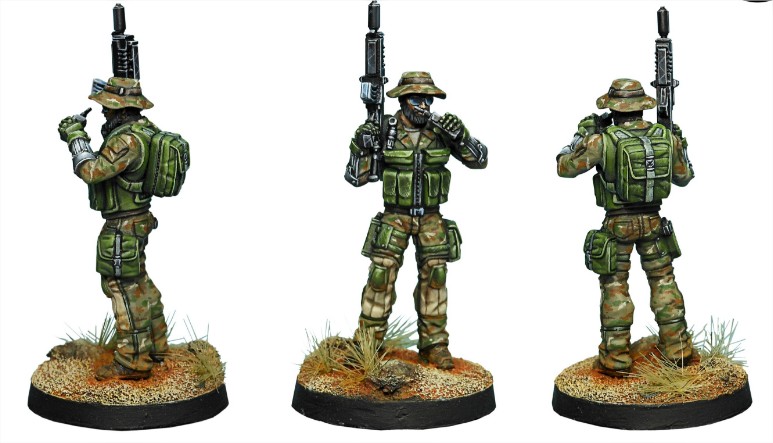 The Foxtrot is here to win you missions. This list is a little light on specialists, so your Foxtrot will be shouldering much of the objective grabbing load. At only 18 points for the Forward Observer loadout, the Foxtrot is another staple of US Ariadna armies.

Having both Camouflage and Infiltration, the Foxtrot can deploy in a nice safe hiding spot ready to grab objectives on turn 1.  Hopefully the enemy is too busy fighting werewolves to notice the Foxtrot casually winning you the game.

In missions where objective can change hands, the Foxtrot can also protect his work by dropping mines near captured objectives. While it might be tempting to utilise Surprise Shot on unsuspecting enemies, the Foxtrot should try and avoid firefights and focus on objectives.

The second specialist in the list, the Marauder is there to grab objectives in the midfield and light enemy specialists on fire.

With Forward Deployment L1 the Marauder can deploy an extra 4 inches outside the normal deployment zone, getting him closer to objectives before the game starts. Again you should try and avoid conflict and focus on objectives, but if you are forced into a firefight over midfield objectives, use the Marauder rather than the Foxtrot to clear the way.

With armour of 3 and a Heavy Flamethrower the Marauder has a chance to burn enemy specialists and survive return fire.  Even if he loses the exchange he has Dogged to use his last breath to capture the recently scorched objective. 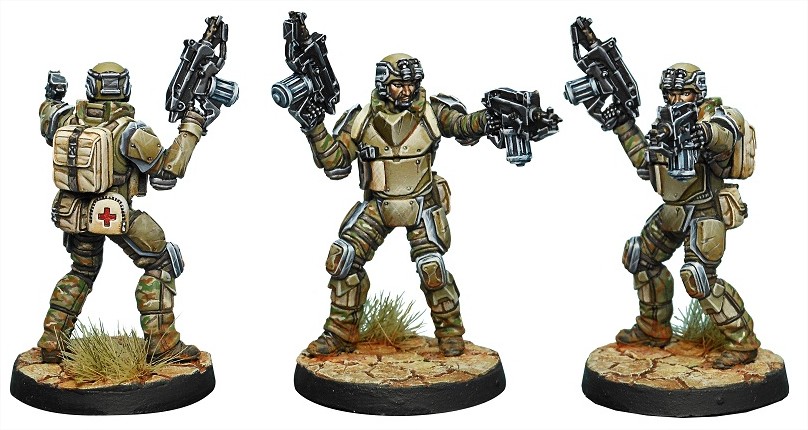 The Minuteman’s combination of high BS, AP Rifle and X-Visor makes him the ideal heavy infantry and TAG hunter.

This combination of skills and equipment provides the element of surprise. Most opponents will never expect you to shoot at their heavy infantry from 30 inches away with a Rifle. But this loadout makes that shot very viable.

X-Visor reduces the range modifier from -3 to 0, and the AP Rifle halves their armour. Suddenly that model running around with a modest Rifle is a real threat.

This loadout also has Marksmanship L1 granting his weapons Shock, great for removing models with NWI or Dogged quickly.

I hope this helps you start you US Ariadna army. If you have suggestions on how to improve this list or any tactics to help those starting with USA share in the comments.  For the full list visit Infinity Army.

Looking to jump into Infinity? You are going to need tokens…lots of tokens. Singles and starter packs @ Battle Tokens.

Author: Shaun Douglas
Shaun is a veteran tabletop wargamer with a decade of experience. His specialty is Corvus Belli's Infinity gamesystem. He began writing for BoLS in 2016.
Advertisement
Armylists Infinity The Game Tactics
Advertisement 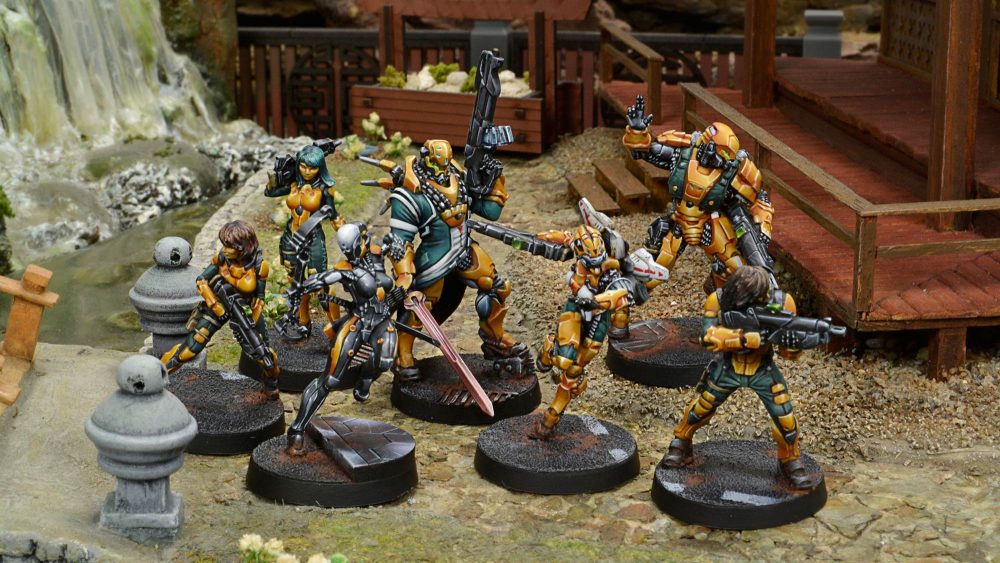