The Ratsurrection: The Path of the Skaven Genestealer Cult

Check out CaptainA‘s new army. A group of Genestealers who opted for hairier hosts for their cult.

Far upon a distant hive planet a seed was planted generations ago. I hideous seed that was meant to circumvent the genetics of the population and start a beacon that would pulse and thrive, eventually to burst and call back the dark lords hungry for the planets soul. This hive planet was old and its inhabitants older still. The purestrain that seeked to overthrow the planet unwittingly unleashed a dark and dormant strain of DNA that was put there not just generations, but eons ago. This strain mingled and overthrew the purestrain of the genestealer and molded it to itself, birthing a new form of cult in the shape of the rat. 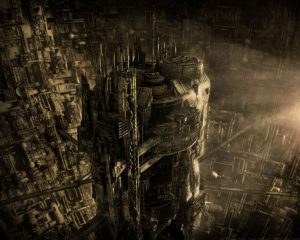 For some time now I have really wanted to do a Skaven themed 40k army. I remember seeing 10 Inch Templates Skaven Dark Eldar and that really struck my fancy as something that would be fun to build and run on the tabletop. I had been trying to put together a Skaven Dark Eldar/Eldar/Corsairs list and while I had some ideas, it just didn’t pop for me. 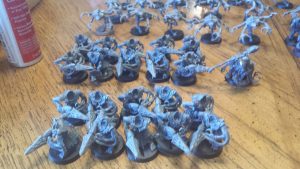 Lately though, with the release of the Genestealer Cult book, I saw a chance to put together a Skaven themed force that would very much fit the fluff of the original army but also be able to take on a life of its own. I started to look at what models could satisfy a similar look and armament to the current Genestealer book and new I basically needed lasgun type models for the Neophytes, pistol and melee models for the Acolytes, and claw wielding models for my Metamorphs. 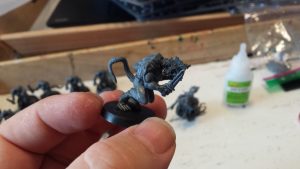 I settled upon Mantic Veer-Myn Nightcrawlers to be my Acolytes as they already had pistol and melee weapons. For my Neophytes I went with Stormvermin bodies with Devourer to be the lasguns and Spellcrow Pleasure Knight heads. And finally for my Metamorphs I’m going with Plague Monk models with Tyranid arms to be their Claws. For my Genestealers I’m using Genesteaers with Skaven heads and green stuff fur added in. All told I’m pleased with the progress I’ve made and have assembled 60 Acolytes, 20 Genestealers, and 20 Neophytes( as of posting I have also assembled my Magus, Icon Acolyte, Primus, and 40 Metamorphs). With my Plague Monks on the way my main force will soon be set and ready for battle.

Lords of the Cult

I got to play a game for our local league against a swell guy who was running Chimera Spam list based on the regiment he is employed with. It was an interesting list that worked very much like a Battle Company. There was like 10 Chimeras, 2 squads of 2 Vanquishers and 1 Wyvern. All mechanized against all foot.

We were playing The Relic, ITC mission 2, Hammer and Anvil. He got first turn and decided to go first which put me in a predicament. I would be unable to infiltrate and go for the alpha strike so I decided to reserve most of my army (I now know that this was in error as the Subterranean Uprising has to go on the table in deployment) and put 10 Neophytes and 6 Acolytes on the table in hiding.

The first turn saw him positioning his forces and taking pot shots at my Neophyte squad. He as actually able to take me off of my objective and so the maelstrom had him up 1-0. I hunkered down and stayed put. 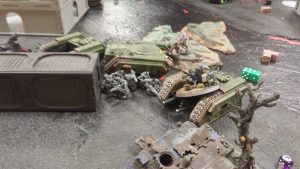 His turn was pretty much the same, taking shots at my forces as much as he could. My turn however saw my army arrive from reserve in force and go for the Cult Ambush. I had all but one 10 man Acolyte squad come in and in rolling everything I only got one 6 for a 10 man Acolyte. The rest rolled mostly 3-5’s. Sadness set in though as 10 Neophytes, 6 Metamorphs, and The First Curse all rolling 1’s and being sidelined. I decided to push hard on his left flank in force and use my one 6 to go after his Wyvern. He left me a hole to put them in and they made short work of the Wyvern, which was a huge concern for me. The rest hunkered down to see if we could withstand the fire and charge in next turn. 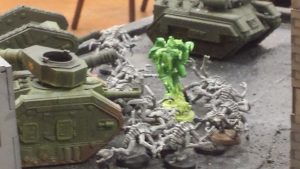 The IG plowed into my forces, sending three units back to aether, but was unable to completely wipe me out. He had a hard presence in the middle near the relic and in his own deployment zone. Neither of us were rolling very well on the Maelstrom table and at this point we were 3-2, his favor. This turn saw my forces rush into his lines and took three Chimeras out, pinning one squad in the wreckage. I pulled off four units to Return to the Shadows and hopefully come in again strong next turn. 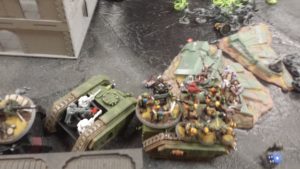 He continued to pile one the pressure, but his shooting was fairly lackluster this turn, and enabled my forces to pounce on his crewmen now out in the open and was able to pop his Warlords transport, leaving him vulnerable. The First Curse also came back on, albeit with a outflank roll of a 2 and prepared for their charge next turn. 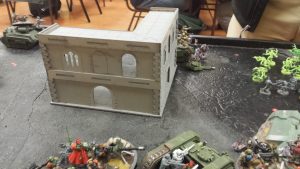 Again, he poured on the firepower, but as he was losing Chimeras and squads, was unable to really crush my many units. My turn saw me charge and beat his warlords unit, 2 Vanquishers, and another platoon squad. I had the relic in my control, but as I had no obsec, was vulnerable to tank shocking Obsec Chimeras. 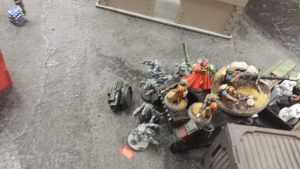 The game went on and he pushed an obsec Chimera with a squad onto the relic. With time running out. The First Curse went after the other Vanquisher squad and position myself to pick up Table Quarters. The game ended and The Ratsurrection ended up victorious 6-4. Neither of us had First Strike (I’ve since reversed the score due to my error). I had the Maesltrom, he had the Primary, and I had Warlord and Table Quarters. It was a fun game and I enjoyed playing a neat narrative of my rats bursting to gunfire, but surging forward to rip open transports and feast upon the squads inside. 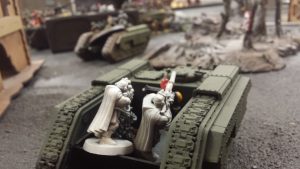 My pure Cult Insurrection force has some great strengths, being able to pull squads off to reinforce and return them near full strength to charge in again was very fun. Trouble is needing to roll 6’s to get the good juice and mow forward was difficult at times and I only rolled 3-4 6’s all game to get the charges off.

I also saw how difficult mechanized lists can be since I had to pop them in the assault phase and had little I could do in the shooting phase as most of my weapons were only strength 3. Once I got into assault though, things really got pulverized with rending and AP5 claws. 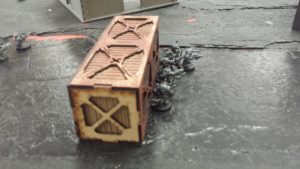 Another difficult issue was in not being able to fully use my Icon and Brood Cycle benefits fully. I wonder if my Subterranean Uprising force is too much maxed out and I should have more forces in my Brood Cycle to make them more substantial. Remembering all the cross benefits was difficult at times and I needed to work on remembering who got what.

I had a concern with time as moving 130 models is difficult, but we got done in 3 hours, which I felt was pretty good for a first outing.

The Genestealer Cult is very fun and different, and army that can be very surprising if I get the right rolls. It was a blast to play and I look forward to seeing what it can do. Painting will be a chore, but I have some ideas that might make things go quicker and at least start me off able to play at TSHFT come January. 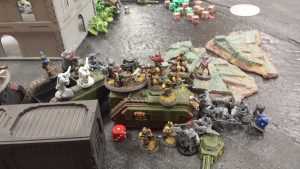