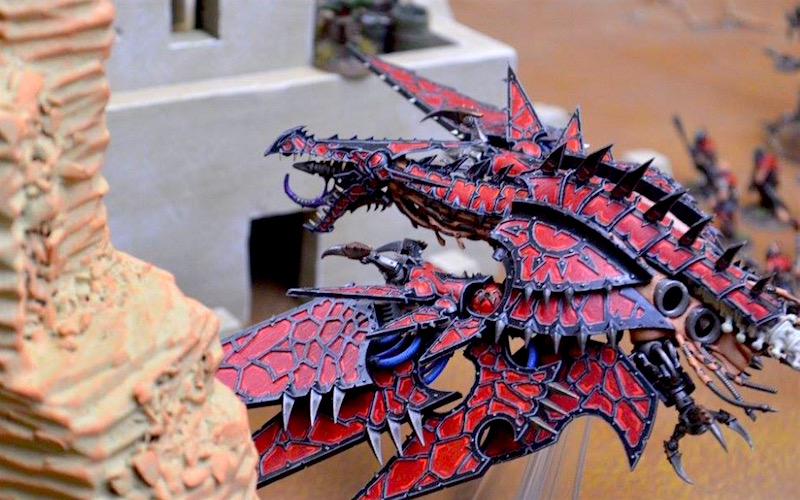 A red sun, akin to an angry bloodshot eye, cast the heavens in a crimson hue. Blood bathed light suffused the desert landscape, the jagged rock formations appearing as chewed bones jutting from the offal landscape. Black clouds scudded across the haemorrhaged sky plunging the spectral landscape into umbral darkness. The clouds moved in all directions and varying speeds contrary to all natural law creating an irregular strobing terror of impenetrable darkness and bloody nightmare. The wind similarly blew in from all directions at once, hot, dry and bearing the overpowering stench of an abattoir. ~the small mud-brick fort a haven of untainted purity set in the demented landscape.

The Cadians nestled within did their best to ignore their maddening surroundings, checking their las-cells and resighting their weapons obsessively if only to distract them from the terrifying carnival of damnation that hovered just out of weapons range. Filth of the warp vomited forth by the damning rituals of the cursed and the insane. A Leman Russ wreathed in blue smoke manouvered slowly into position, its tracks squealing in protest under the metal leviathans weight. Heavy weapons situated on the roofs of the squat mud-brick buildings tracked their targets, weapon barrels moving slowly and surely, their targets sighted and ranged, patiently awaiting the order to unleash hell on hells own legions.

At an unheard and unseen signal, the writhing masses of teeth and claws that made up the Blood Gods host started forwards. Every Cadian picked his target and anxiously waited for the order they both wished for and feared most. Battle was upon them. The tension could be cut with a knife. Waiting. The range closed. Individual horrors could be made out from the mass, horned things bellowing inhuman rage, giant bat winged beasts whose breath set the very air aflame. Waiting. Thundering beasts of living metal pawing the tortured earth with their brazen hooves. Waiting. Mutilated cultists, their arms raised in unholy adulation, chanting the praises of their unloving deity. The vox crackled and almost before the word was spoken dozens of las bolts, autocannon shells, missiles and heavier ordnance erupted from the fort’s perimeter, pulverising the front ranks of their seemingly innumerable foe.

And there you have it again another amazing set-up by the team for today’s battle report. Mud brick fort set in a shallow valley. Does it remind anyone of any historical engagement? 🙂 Lets get ready to rumble! Terrain made and sent to us by our good friend Jan Kowalski PM him for any quotes and questions.

We decided to go for a custom mission, one we nicknamed Pask’s Last Stand. The Astra Militarum set up first within 6 inches of the perimeter of the buildings and barricades, and the Daemonkin set up within 6 inches of the short edges of the board. The Astra Militarum scored D3 victory points at the end of every game turn after the first, and Khorne scored 1 victory points for each unit killed. First Blood and Slay the Warlord were also in play. After rolling for night fighting, and seeing that it’s the middle of the day, Nathan set’s up first as in the mission rules.

The hounds spot their target, and they are hungry!

Chris then sets up and prepares to weather the storm of the Emperor’s Fist Armoured Company!

This is going to be one for the history books! The mighty Astra Militarum versus the hordes of Khorne Daemonkin! Will Nathan and Knight Commander Pask be able to hold off against the seemingly endless tide of red and black? Or will Chris and his daemon dogs taste man flesh on this day? Time to strap in and find out!

Turn 1 (Astra Militarum) After a quick movement phase, in which nothing moved, we head straight into the Psychic phase. With one Primaris Psyker rolling Perfect Timing and Precognition, and the other managing Misfortune and Precognition as well! Who saw that coming? Winds of the warp were blowing strong with all these Daemons present, with a 6 rolled, Nathan started by casting Prescience on the Veteran Lascannon Team staring down the Soul Grinder and Maulerfiend.

Turn 1 (Astra Militarum) And then Prescience on the Vanquisher on the opposite side of the compound, which Chris tried to deny but failed with all 6 dice.

Turn 1 (Astra Militarum) With the end of the Psychic phase, it’s time to bring the big guns out to play, starting with The Company Commander ordering the lascannon team on the adjacent building to his left to bring the soul grinder down. The unit acknowledges the order, takes aim……and it’s a missed shot!

Turn 1 (Astra Militarum) The commander is not happy with this, he knows that soul grinder can lay down some impressive counter-shooting, so he orders the lascannon team on the building behind him to bring it down as well, this time managing to get a glancing hit! That should keep him happy for now “Soul Grinder spotted! Bring it down now! Not like that, bunch of idiots! You better bring it down or someone’s getting executed! That’s better”

Turn 1 (Astra Militarum) Pask taking note of what the Company Commander was trying to do, spins up his Punisher’s Gatling Cannon, he pumps a mighty 20 shots at the soul grinder and…

Turn 1 (Astra Militarum) Boom! The preferred enemy combined with Rending proved fatal for the Soul Grinder, after scoring 2 glancing and 2 penetrating hits, and failing all the Daemon saves, it’s left as nothing but a burning wreck.

Turn 1 (Astra Militarum) Moving over to the other side of the board, the Prescienced Vanquisher along with one of the remaining lascannon teams eye up the Daemon Prince, and manage to knock 2 wounds off him, even with jinking and feel no pain!

Turn 1 (Astra Militarum) The Tempestus Scions see the oncoming hounds, and open fire. Managing to score 2 hits, but the warp energy surrounding them absorbs some of the incoming fire so only 1 wound was suffered. The Veteran Snipers see this, and take a perfectly aimed shot and finish it off. The Master of Ordnance bring down his Artillery Bombardment and kills off another hound.

Turn 1 (Astra Militarum) The demolisher spots the Flesh Hounds on the hill, and opens fire. Scoring a direct hit with 5 models under the template, Nathan only wounds 3, of which 2 are saved! A single hound is removed as it gets turned into dog meat. “Over there! More hounds of chaos! Boom! Wahahaha!”

Turn 1 (Astra Militarum) The final Lascannon Team ontop of the building takes a pop shot at the already damaged Maulerfiend, penetrates, and rolls a 6! Boom! There goes another Daemon Walker! This side of the board is taking a battering, and it’s only turn 1!

Turn 1 (Astra Militarum) With the Soul Grinder and Maulerfiend in sight dead, the Battle Tank lines up on the Bloodcrushers on the hill, and annihilates one with a strength 8 shot. These guys only being toughness 4 makes them rather squishy.

Turn 1 (Khorne Daemonkin) Having lost 2 units so far, Chris decides to not spend his 2 blood tithe points, instead saving them for the next turn. He starts off his movement phase by gliding his Daemon Prince 12 inches forward, with the hounds and the cultists following closely behind

Turn 1 (Khorne Daemonkin) The other side of the board is the same, with everything charging forward as far as it can go.

Turn 1 (Khorne Daemonkin) After movement, everything runs forward as well, as there’s no charges on turn 1. (Part of the mission special rules is no charging on turn 1, due to the closeness of the armies on set up)

Turn 1 (Khorne Daemonkin) The Bloodthirster stares down the Armoured Company, just waiting to cleave some tanks in half.

Turn 2 (Astra Militarum) And as quick as that, Chris’ turn is over! Back to Nathan, who has decided to move his units around a bit to get some better lines of fire on the rapidly approaching force. Current score is 1-0 to Nathan (First Strike)

Turn 2 (Astra Militarum) Onto the psychic phase, Shaggy rolls a 1 for Winds Of The Warp, and goes on to cast Prescience on Pask’s unit, for all that rerolling goodness. He also tried to cast Misfortune on the Daemon Prince, but fails. Next up are orders and shooting. Shaggy starts off by using First Rank, Second Rank Fire on his lascannon team, but they fail their leadership test, so he instead orders them to Bring It Down on the Daemon Prince, which passes. He proceeds to cause 4 wounds, which are all passed with 3+ power armour saves! After which, Pask orders his Gunners to Kill On Sight, effectively giving himself the ability to split fire at a separate unit. He decides it’s time to show his men how much of a boss he is, and opens up on the encroaching Bloodthirster. Firing with 20 shots, rerolling due to Prescience, then needing 5s to wounds with rerolling 1s for Preferred Enemy, he manages to score 8 wounds. Chris roll’s his saves and….

Turn 2 (Astra Militarum) The Bloodthirster fails 5 out of 8 saves! The big guy goes down!

Turn 2 (Astra Militarum) Chris is not a happy bunny, his D axe didn’t get a chance to even scratch any paintwork

Turn 2 (Astra Militarum) Pask’s buddy is up next, and he’s locked his sights on the incoming dogs. Those Gatling Cannons again proving fatal, and causing 12 wounds! Chris manages to make 4 saves, but 4 dogs still go down, then the lascannon and multimelta obliterate another 2 dogs. I hear Nathan likes to kick puppies as well.

Turn 2 (Astra Militarum) Moving over to the other side of the board, we start with the vanquisher at the Daemon Prince. The Battle Cannon misses completely, but the lascannon finds it’s target, and removes the last wound from him! The invulnerable saves and feel no pain couldn’t save him from the might of the Armoured Company.

Turn 2 (Astra Militarum) Perfect board to be playing on with the masses of bloody skulls rising up through the cracks! Lovingly painted by our own Lawrence.

Turn 2 (Astra Militarum) Such a cinematic battle! Spielberg eat your heart out!

Turn 2 (Astra Militarum) And the pain train isn’t over yet, as Nathan drops an Artillery Bombardment on the Flesh Hounds, but it scatters off 9 inches into no mans land. Determined to take some out, he tries instead with the Demolishers’ Siege Cannon. This time scoring a direct hit on 6 hounds, rolling only a single 1. Chris tries for five 5+ Daemon saves, and manages to save 3 of them! Still 2 dog’s are instakilled.

Turn 2 (Astra Militarum) The plucky guardsmen on top of the building swivel their lascannon round to try and take down the Maulerfiend. They hit….. Nathan rolls for armour penetration…. Only manages a glancing hit on a roll of a 3! Which Chris rolls to save, and fails yet again. He just can’t catch a break today! The Maulerfiend is left on just a single hull point.

Turn 2 (Khorne Daemonkin) And with that it’s the start of Khorne Daemonkin turn 2. Chris rolls for his Heldrake in reserve, and it zooms onto the board. He also decides to spend his 4 Blood Tithe points and gives everything Feel No Pain.

Turn 2 (Khorne Daemonkin) The hounds move up as far as they can, ready to rip and chew into the guardsmen, with the cultists close behind

Turn 2 (Khorne Daemonkin) Start of the shooting phase, the cultists open fire on their imperial counterparts hiding up on the buildings, and manage to take one down! The autopistol is mightier then the lasgun!